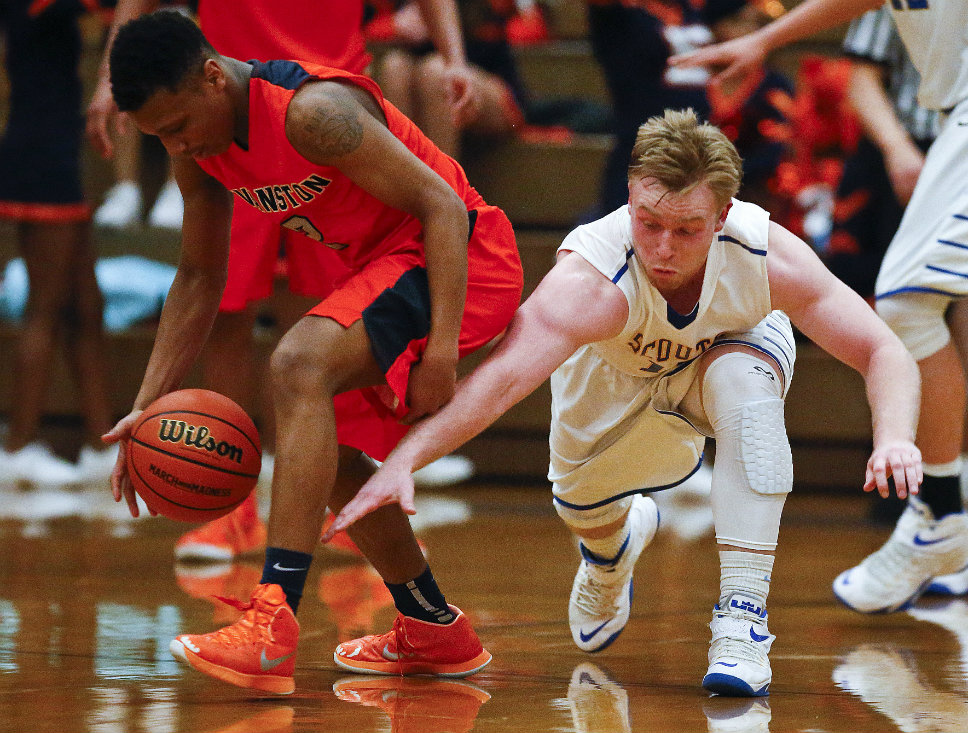 Evan Boudreaux’s “playoff beard” is getting thicker and thicker.

Which is just what he — and his fellow Scouts — want.

Shaving it in the morning remains out of the question.

Thanks to Lake Forest High School’s 54-47 semifinal win over Evanston in the Class 4A Waukegan Sectional on March 11, the senior center will keep the growth for at least two more days. The Scouts, who never relinquished the lead against the Wildkits, now will focus on the tournament’s top seed: Stevenson.

The two best teams in Lake Country will meet for the third time this season on March 13 at 7 p.m. Stevenson advanced to the sectional final on March 10 with a one-point victory over Niles Notre Dame.

The Scouts have 28 wins and two losses on the season — and both losses came against the Jalen Brunson-led Patriots.

Stat of the Night: Boudreaux pulled down 11 rebounds in the fourth quarter.

Play of the Night: Late in the second quarter, Edwards tracked down a long rebound just before the ball went out of bounds and then flipped it Boudreaux for an assist. A rebound and an assist essentially on one play.

Moment of Truth: After Evanston had cut the lead to three points, 37-34, with 6:38 left, Traynor immediately answered with a strong drive down the lane. The Scouts then scored 9 of the game’s next 11 points, including a long three-pointer by Vogrich.

Notables: Edwards tallied eight of his 12 points in the fourth quarter. The junior also had three rebounds, two blocks and one assist in the final frame. … Eastern, who is Evanston’s headline player, scored nine of his 18 points during a 3-minute, 19-second stretch in the fourth quarter. … Lake Forest finished the game with 21 turnovers.

Seen on the Beat: A sign in the Lake Forest cheering section read: Sorry, ‘ston, but we have the EVAN

Sound Bites: “(Waukegan’s court) is a great stage. I love it here. I wish we could play every game here,” — Vogrich, on playing at the ‘Dog Pound.

“It’s nice to have seniors on the court. They kept their composure. They held it together. They talked to one another and were able to figure it out,” — Lake Forest head coach Phil LaScala.

“We’ve got to handle the pressure better. This was a warm-up for Friday night (against Stevenson),” — LaScala, on his team’s 21 turnovers.

“Evan has a heart of a lion,” — LaScala, on Boudreaux’s 11 fourth-quarter rebounds.

“Steve’s defense on Eastern was incredible. He battled him. Steve’s length (6-foot-7) frustrated Eastern. He’s our best on-ball defender, ” — LaScala, on Vogrich’s solid ‘D’ against Eastern, who is one of the best scoring guards in the state. In quarters 1 through 3, Eastern was 2-for-10 from the field.

“I knew I had help (against Eastern). He is very long, very quick. I watched a lot of tape on him,” — Vogrich, on guarding the Evanston star.

“Steve did a great job on Eastern. He was playing suffocating defense on him” — Boudreaux, on Vogrich.

“It’s great having ‘Zo out there. He’s a great fundamental player,” — Boudreaux, on Edwards.

Evan, on Evan’s eleven (rebounds in the fourth quarter) — “Just trying to do everything I could to help us win. Whatever it takes. I didn’t want to leave anything to chance.” 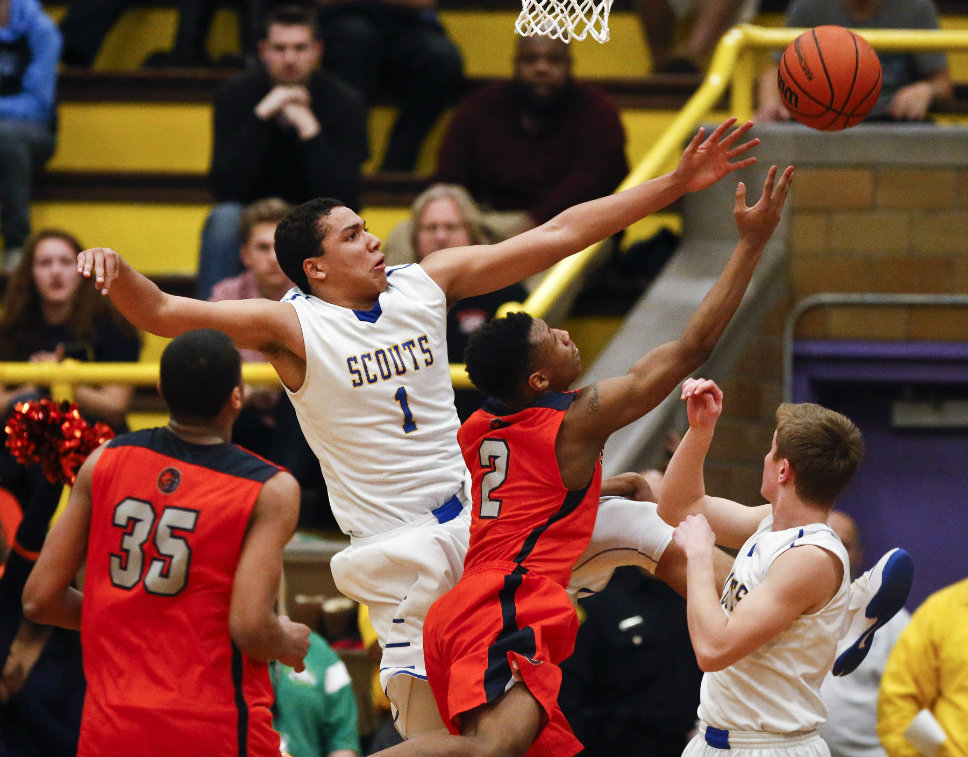 Lorenzo Edwards (No. 1) defends Lake Forest’s basket during sectional action. He had five blocks in the game. Photography by Joel Lerner 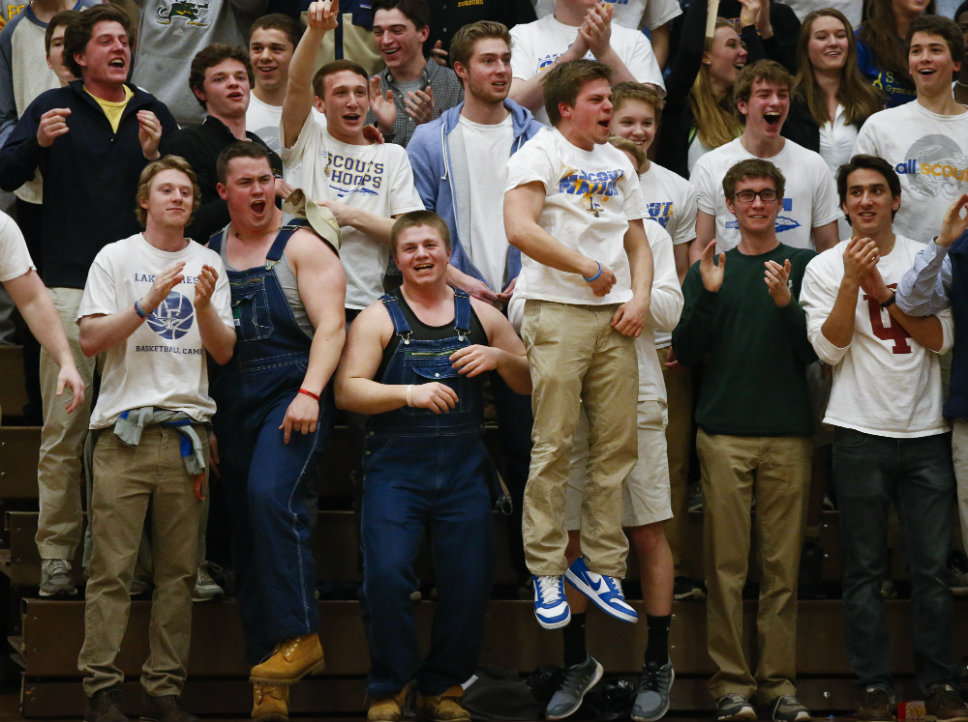 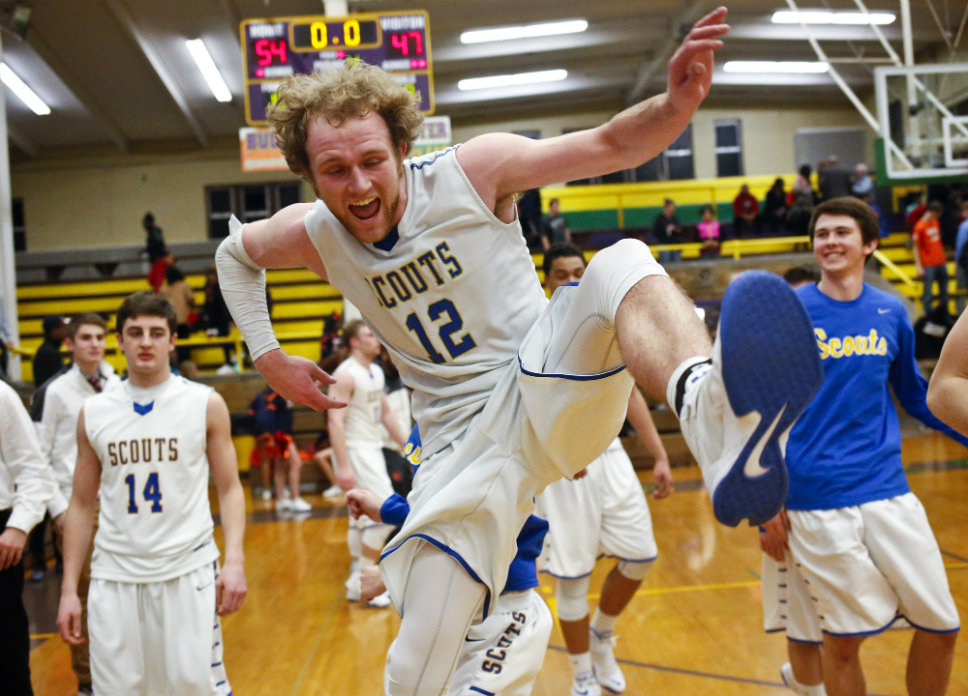 Evan Boudreaux of the Scouts celebrates his team’s sectional semifinal win. He had 22 points and 22 rebounds. Photography by Joel Lerner 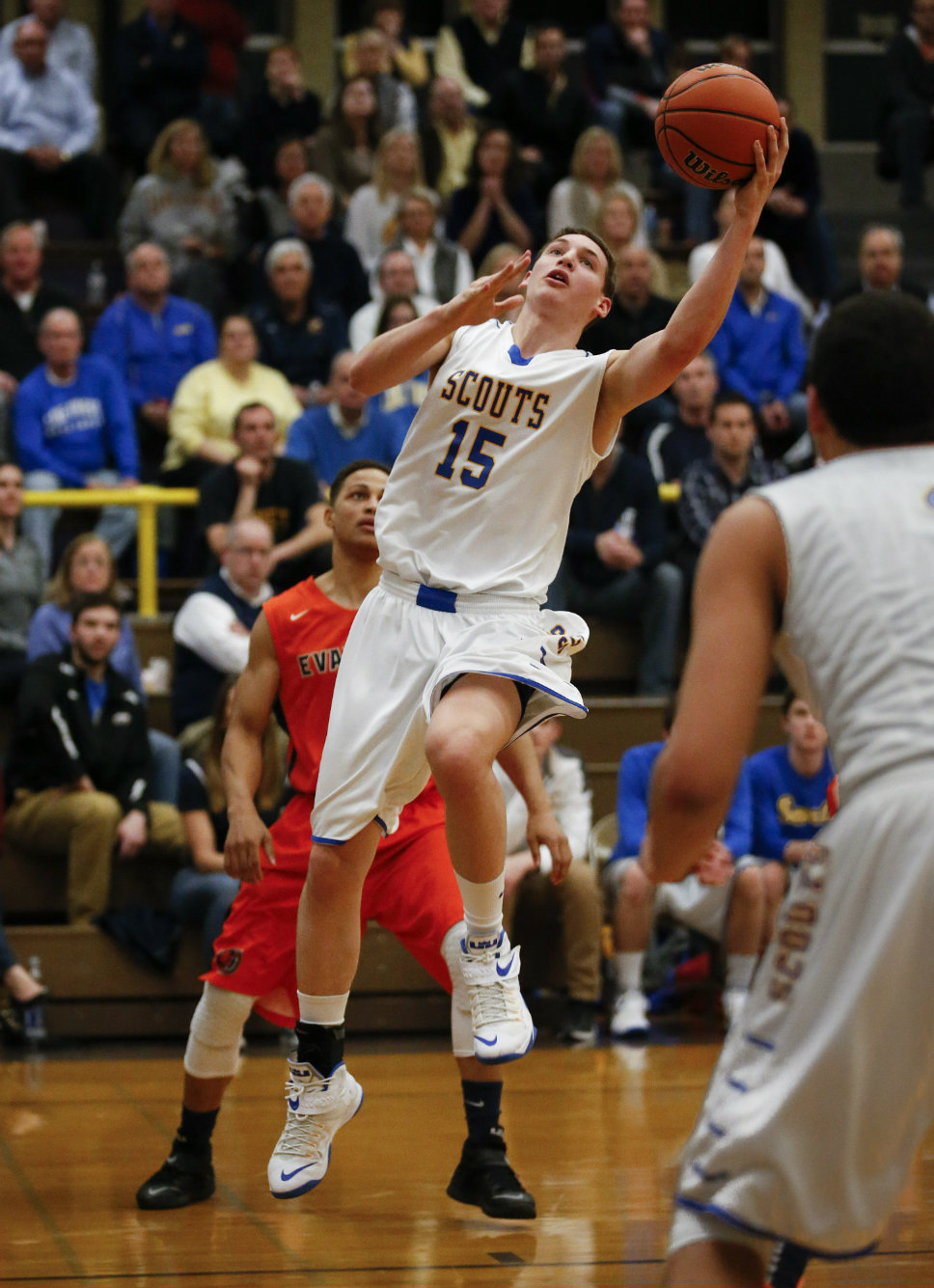 LF’s Noah Karras drives to the basket against Evanston. Photography by Joel Lerner 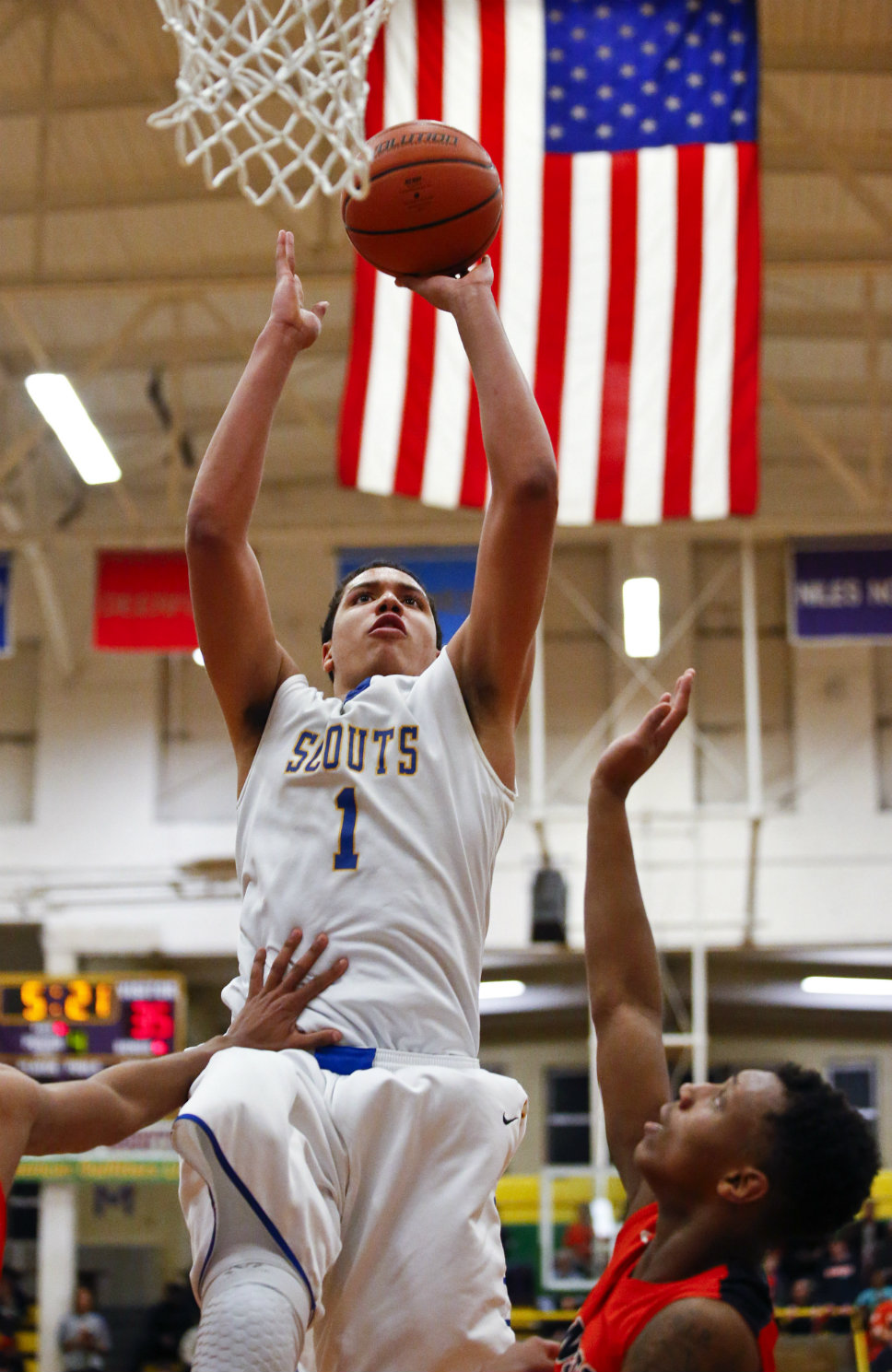 Lorenzo Edwards of the Scouts on an inbounds play. Photography by Joel Lerner 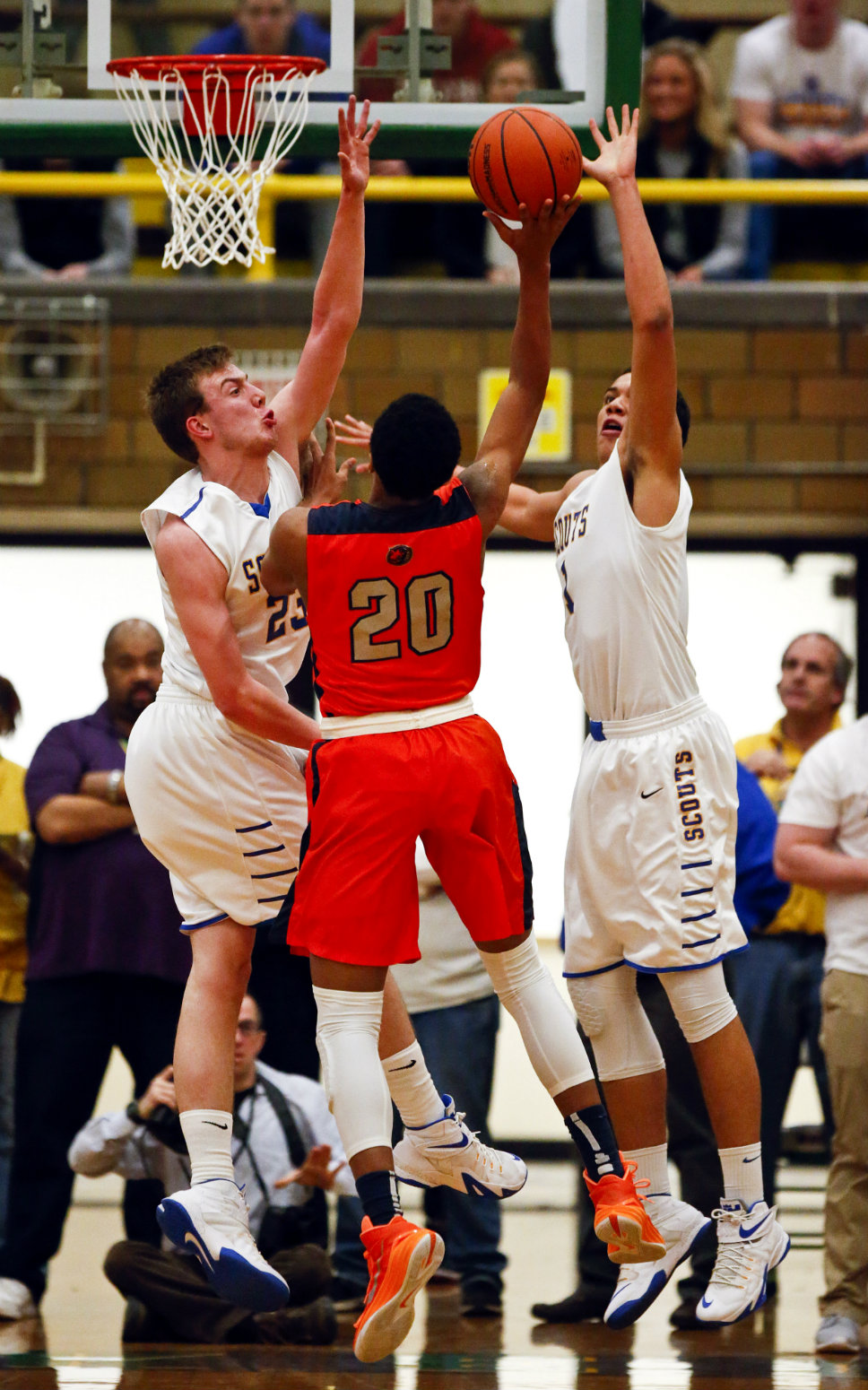 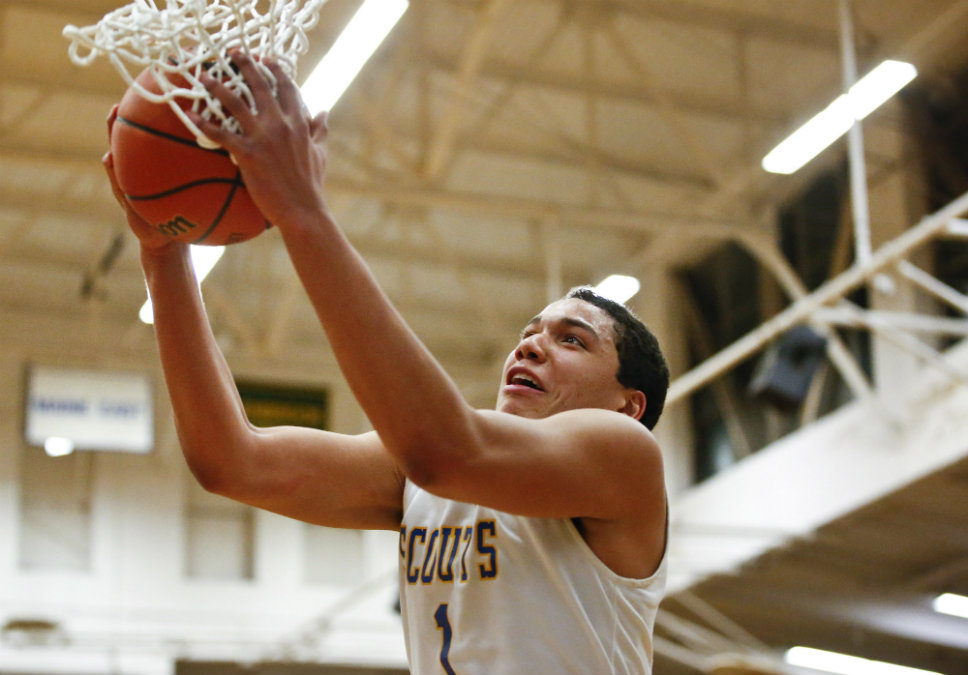 Lorenzo Edwards of the Scouts pulls down a rebound. He finished the game with nine boards. Photography by Joel Lerner 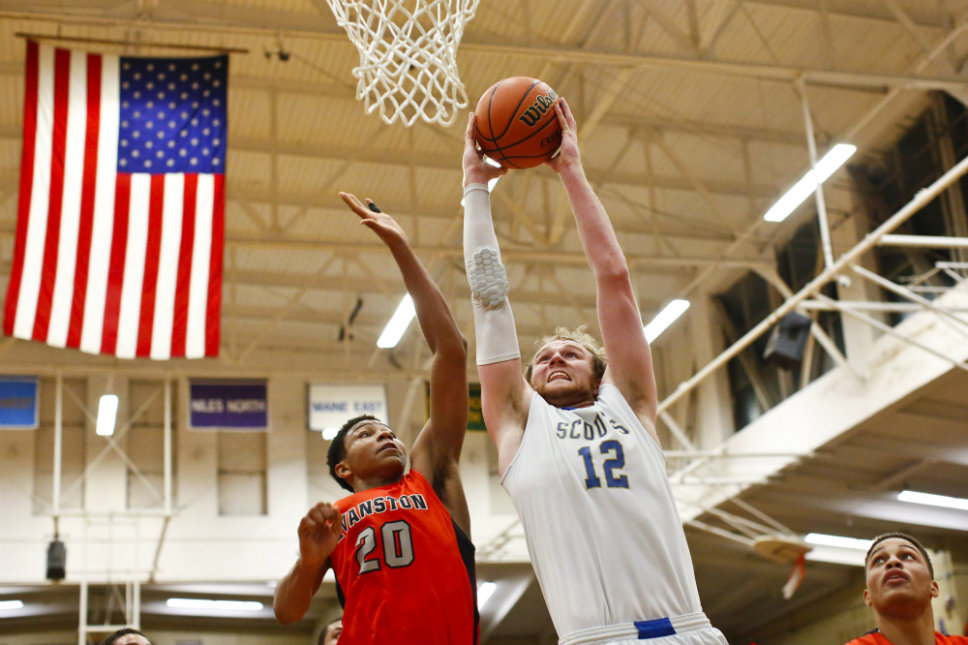 Evan Boudreaux of the Scouts powers up a shot against Evanston’s Nojel Eastern. Photography by Joel Lerner