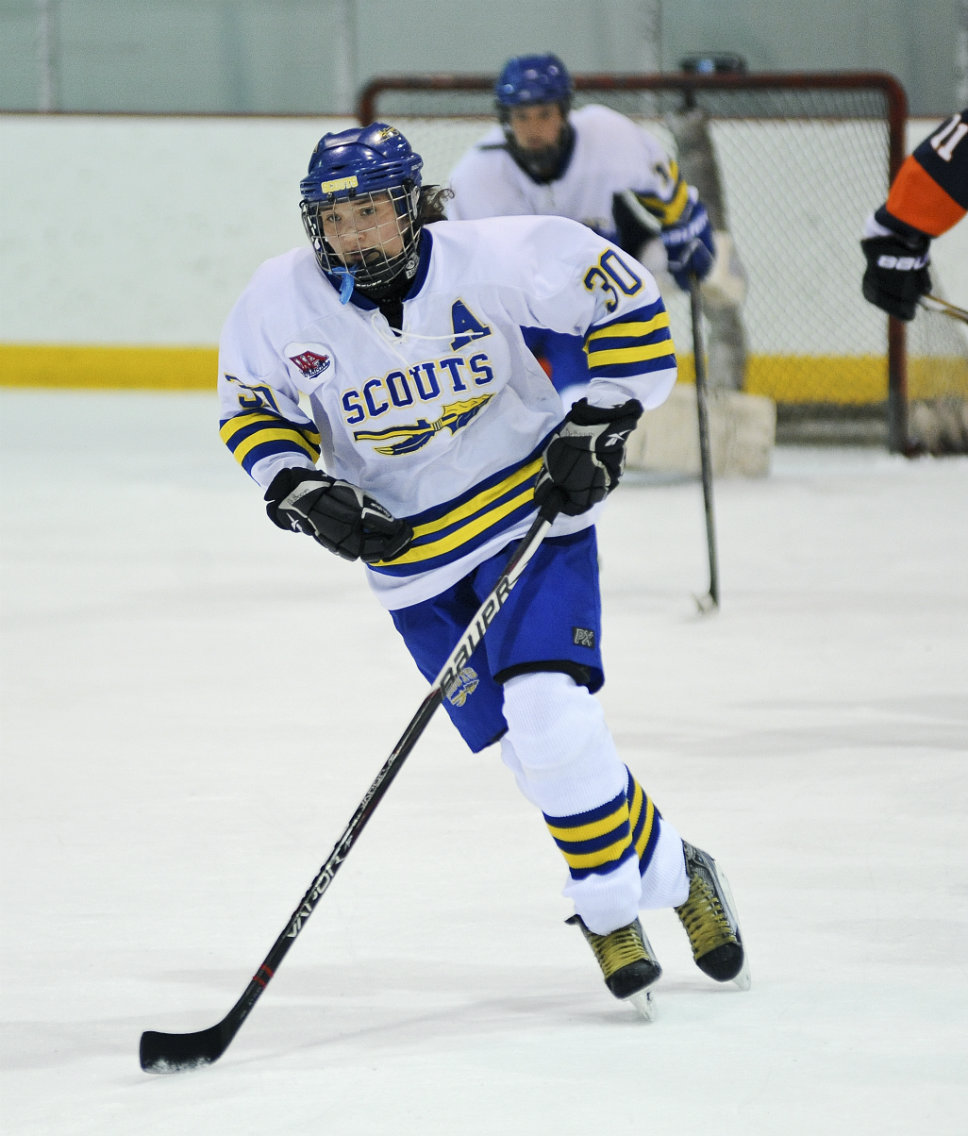 Willa DeBoom, who attends Woodlands Academy, has been one of the standouts for the Lake Forest Scouts. Photography by George Pfoertner

DeBoom, a senior at Woodlands Academy, plays hockey for the Lake Forest Scouts. DeBoom is a Dutch name. A defenseman, she stands 5-foot-10. The Lake Bluff resident looks 6-10 in skates and plays taller than that at times.

“When I was little,” she says, “announcers had fun when they announced my name at games. They got excited. They would yell, ‘DeBooooooooom!’ ”

DeBoom was da bomb in a playoff game against Loyola Academy two winters ago. With her team down 2-0 in an American Hockey Association Illinois (AHAI) state semifinal against Loyola Academy, DeBoom blasted a shot from the point. It beat LA’s goaltender. It lifted her team. It paved the way to one of the best wins in program history.

“I remember her standing near the blue line, wondering if she had scored,” Scouts senior defenseman Mary Claire Newtown recalls. “All of us had been feeling down before the goal. We had kind of lost hope.”

The victory sent Lake Forest to the United Center, where they defeated Fenwick for the state championship in 2013.

“That puck in that semifinal, it somehow found the net … it had eyes,” Lake Forest coach Liz Zorn says. “We needed that goal, really needed it. It’s my favorite Willa DeBoom moment.”

It might be supplanted this month. DeBoom and the Scouts, seeded fifth, advanced to another AHAI state semifinal, after eliminating fourth-seeded Evanston 3-0 on Feb. 19.

DeBoom, a field hockey player in fall seasons at Woodlands Academy, displayed her considerable impact on ice in a Scholastic Cup semifinal at Lake Forest Academy on March 8. After controlling the puck in Upper Fox Valley’s zone in the second period, DeBoom started falling backward near her team’s bench. On the way down she calmly slid the puck to a teammate, preventing an UFV breakaway and keeping a possession alive. DeBoom, an alternate captain, also planted herself just to the right of LF sophomore goaltender Corynn Salazar to stop a shot late in the third period of a 3-1 loss.

“She knows what to do when she has the puck,” says Newtown, the Scouts’ captain. “She knows the right time to pass it. Willa doesn’t force passes, and she has good instincts.”

“It’s nice. I expect consistency from Willa every game,” Zorn says. “I get that from her every game. She’s a real solid player. She makes strong plays.”

“Willa loves being out there,” says John Sensenbrenner, a Lake Forest Scouts board member and the club’s administrative vice president. “She’s always smiling at practices, always smiling during games. I see it. We all see it. She loves hockey. She’s happy on the ice, a positive kid having a positive influence on the team.”

The daughter of University of Wisconsin graduates Alan and Kendell DeBoom, she is thinking of attending UW. Her mother was a chef. The daughter of the former chef might major in food science; her plan, for now, is to enter college as an undeclared major.

Mom DeBoom, according to Willa DeBoom, is batting 1.000 as a cook at home.

“Everything she cooks is great,” the defenseman says resolutely.

One of Willa DeBoom’s favorite ingredients for a productive day is rest. Her favorite post-school day and pre-practice pastime is to hit the pillow at home for a power nap (power plays come later). A refreshed DeBoom, upon arriving for a Scouts practice at Lake Forest College or for a game anywhere, typically likes to extricate her big hockey bag from her frame and announce to anybody within earshot how long her nap lasted and how great it made her feel.

“She needs her sleep … she gets her sleep,” Zorn says. “In addition to what she does for us on the ice, she provides comic relief for all of us. She’s always smiling, always laughing. Willa is chill, down-to-earth, a well-rounded kid.

“A lot of our players look up to her.”