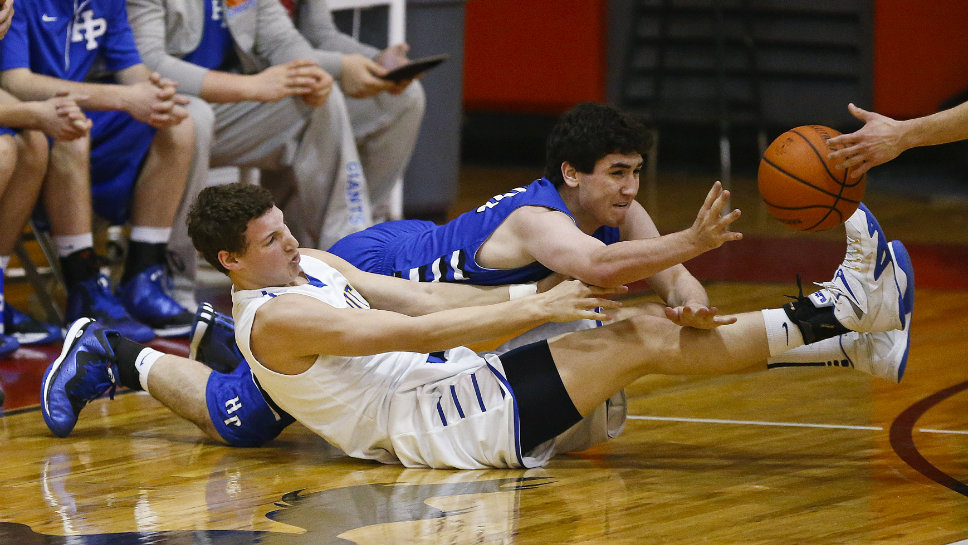 The blocked shot in a boys basketball game did not sound normal. It was louder than others, considerably louder. Lake Forest High School senior forward-center Evan Boudreaux swatted the field-goal attempt in the fourth quarter of the Class 4A Mundelein Regional final.

The block, executed against a Highland Park High School shooter on March 6, rivaled the resounding boom of a volleyball kill. The bruised basketball then smacked hardwood, producing another echo in the gymnasium.

Emphatic reactions from the crowd drowned out both echoes.

“It was loud,” Lake Forest senior guard Noah Karras said of Boudreaux’s erasure, which led to a Boudreaux layup at the other end of the floor.

The sequence was not the turning point in Lake Forest’s 53-32 victory. It was an exclamation point, pen or keyboard not required. The victory avenged the Scouts’ stunning loss to HP’s Giants in a regional final at Libertyville High School last winter and advanced them to a Waukegan Sectional semifinal against Evanston (20-9) on March 11.

“Different teams,” Scouts coach Phil LaScala said of his current squad and last year’s squad. “Our guys did an outstanding job of defending and keeping their composure. Our guys competed hard on every possession. When they do that, they’re tough to beat. [Highland Park] is a well-coached team, all seniors. It’s a really good team; their kids move the ball like no other.”

Seventh-seeded HP (20-8) did just that for most of the first half, passing crisply and extending possessions to keep second-seeded LF (27-2) from establishing rhythm on offense. LF took only seven shots in the first quarter, netting three.

“Our plan was to be patient but not passive, to look for good shots,” Giants coach Paul Harris said. “We had good looks, even in that second quarter [when HP scored only two points]. We didn’t hit them, and Evan got going. They also controlled the glass.”

Dartmouth-bound Boudreaux tallied eight of his game-high 23 points in the Scouts’ 11-point second quarter. He also had something to do — OK, a lot to do — with HP’s scoring drought from 4:06 of the first quarter to 1:57 of the second quarter.

Lake Forest struck for 13 unanswered points in 2:50 at the outset of the third quarter. University of Chicago recruit Karras nailed a pair of treys in the barrage. Scouts senior guard-forward Steve Vogrich hit a three-pointer. Scouts senior point guard Jack Traynor (6 points, 8 assists) started the run with a field goal, and Scouts junior forward Lorenzo Edwards ended it with a field goal.

Too good, too efficient, way too many exclamation points.

“This was huge, winning a regional and getting some revenge,” Karras said. “What helped was having two of the best big players [Boudreaux and Edwards] in the state do what they do. We got the ball inside to them. Then, later, that opened it up for our shooters.”

Harris stood near a baseline following the playoff game, following the conclusion of his program’s second straight 20-win season. Thoughts raced through his mind at a NASCAR clip. He hoped they would decelerate by the time he returned to HPHS.

“Trying to figure out what I’m going to say to my [seven] seniors,” Harris said. “What I’ll say, for sure, is, ‘Thank you.’ There’s so much to celebrate. It’s a special group, no doubt. They all love the game so much. They care for each other. They embraced, each year, what it means to be a Highland Park High School basketball player. I couldn’t ask for anything more than that.

Notable: Boudreaux is the only current Scout who played on two regional championship teams. In Boudreaux’s freshman season, LF’s Scouts beat Fremd’s Vikings 51-33 to reach a sectional semifinal against Warren. LF was a fifth seed, Fremd a 13th. Fremd had eliminated fourth-seeded Waukegan in a regional semifinal. … LF went 3-0 against HP this winter. The matchup in last weekend’s regional final was the teams’ fifth since December 2013. … Harris, on LF’s hoopsters: “Boudreaux and Karras get a lot of recognition, but they have a lot of very good players.” … Traynor got whistled for his third foul at 6:57 of the third quarter, in the middle of the Scouts’ game-turning 13-0 outburst. He committed his fourth foul at 2:56 of the same quarter. “He handled [foul trouble] great,” LaScala said. “He kept competing.” … HP’s Lundevall and senior forward Jordan Krawitz each finished with two steals in last weekend’s regional final. … HP produced a 7-2 run at the end of the third quarter, limiting LF to a Boudreaux field goal in the final 4:51. … Lake Forest senior forward-center Tommy Trkla came down with four rebounds. … Lake Forest shot 61 percent from the field, 73 percent (11-for-15) in the second half. … Highland Park placed two players on the all-CSL North squad: Norcia and Sachs.