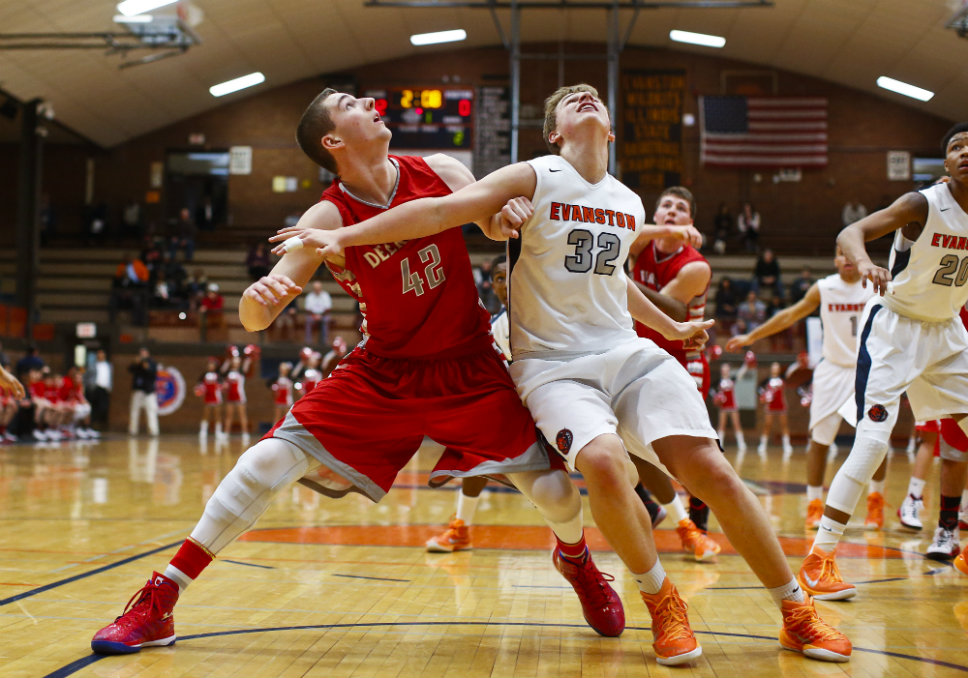 His ego? Not so immense.

Excuse making? Not his thing.

The Deerfield High School senior center isn’t one to play the blame game. He’s a standup guy with a serious demeanor.

Lieb might have to duck to get through doors, but he didn’t duck any questions relevant to the Class 4A regional title game on March 6.

A storybook ending — for Deerfield fans — was ready to be written inside that charming, throw-back gymnasium at Niles Notre Dame High School.

With the Warriors trailing the host Dons by two points and time running out, Lieb, who had missed most of the season rehabbing an ACL injury, had a chance to put down a perfectly placed alley-oop pass from teammate Sam Kuznetsky and most likely send the game into overtime.

So much for the perfect scenario.

So much for the feel-good story.

There might have been some contact on the play, but Lieb’s shot from point-blank range bounded off the rim — and the Warriors wound up losing the game 49-47.

“Whether I was fouled or whether there was goaltending, I should’ve made it,” he added.

Lieb, who finished the game with four points, 13 rebounds and four blocks, didn’t get to celebrate a win against the highly regarded 26-4 Dons.

But, without a doubt, he won over his teammates and coaches — by coming back weeks ahead of schedule.

“He worked his tail off to get back on the court,” said Deerfield head coach Dan McKendrick. “It’s such a testament to his work ethic.”

“He’s got to be one of the hardest workers that I’ve ever known,” added junior guard Jordan Baum. “And for him to make it all the back was huge for us.”

Having a skillful 6-9 player on the court radically changes a team’s complexion.

“He was a presence out there,” said Deerfield senior shooting guard Joey Lane. “He took pressure off the rest of us. With him on the court, teams had to be cognizant of where he was at all times. He’s getting rebounds. He’s altering shots. And he’s doing a lot of other things that might go unnoticed by the untrained eye.”

Lieb, who officially made it back on the court on Feb. 6 in a game against Maine West, had been playing on a limited basis. That was not the case in the regional title game. McKendrick extended his minutes in this winner-take-all matchup.

And Lieb played with ferocious energy throughout the contest. In the opening minute of the second half, he came up with a monster block on a shot taken by 6-7 Anthony D’Avanzo (19 points), which caused a frenzied Deerfield student section to go berserk.

Lieb made a similar play early in the fourth quarter, when he raced the length of the court to swat away and foil another D’Avanzo shot attempt.

“I felt like even if my shots weren’t falling, I still could do other things to contribute, like rebounding and blocking shots,” said Lieb.

Losing a big chunk of your senior season is never easy, but Lieb has the luxury of looking at the big picture. There figures to be a lot of basketball in his future.

Prior to that fateful day in June — when he tore his ACL in a pickup game during open gym — Lieb was on the fast track.

In May, after playing well in the spring AAU season with the Illinois Wolves, he received an offer from Brown University.

And the injury didn’t dissuade Illinois State. In June, he received an offer from the Redbirds. And there are others who remain highly interested in his services.

“A lot of doors have been opened,” said Lieb, crediting McKendrick, along with Wolves coach Mike Mullins. “And I will be back playing with U-17 Wolves this spring.”

What college scouts like about Lieb is his versatility. Coming from a basketball family — his dad (Andrew) walked on at Northern Illinois University while his two brothers (Ryan and Brandon) are firmly entrenched in the sport — he developed his guard skills at a young age.

Lieb was spotted dribbling the ball between his legs out on the perimeter on a couple of occasions in the Notre Dame game.

Sidetracking Lieb isn’t easy. During his sophomore campaign at Deerfield, he missed time after sustaining a back injury.

“I got through that okay,” said Lieb, who earned all-league accolades as a junior.

Getting through an ACL rehab, however, was a totally different matter.
“Mainly, I kept a positive outlook,” said Lieb. “It’s a stressful injury for an athlete. Luckily, I rehabbed properly. Six days a week. I made sure that I strengthened both legs.”

Once he enrolls in college, don’t expect Lieb to go into medicine or physical therapy. He’s targeting a business degree.

“I really don’t want to see others go through what I had to go through,” he said.

Lane and Baum, who earned all-Central Suburban League North honors along with Kuznetsky and Nick Zwart, led the way with 16 and 15 points, respectively. And both came up with some amazing stretches in the title game.

Baum got the Warriors off to a flying start by going 3-for-3 from long range in the first quarter. He added two more triples in the fourth quarter. His ice-in-the-veins three with 1:21 left to play tied the game at 45-45.

The second quarter belonged to Lane. He popped in three three-pointers to put the Warriors ahead 15-13 at halftime.
“We wanted this so bad, and that’s why it hurts so bad. We worked hard to get to this point. And we were so close,” said Lane.
“These are the greatest guys that I’ve ever played with,” Lane added.

Kuznetsky scored one of the other clutch baskets. With 2:16 left, Kuznetsky hit a 17-footer which initially bounced high off the rim before falling through to cut ND’s lead to two points, 43-42.

“I’m not disappointed with our kids at all. Instead, I’m very proud,” McKendrick said. “This team was such a pleasure to coach. They’re great kids with great families. We’re not going to leave this gym with any regrets.”