Brenda Myers-Powell, a survivor of abuse, drugs and prostitution, shared her personal story with well over 200 people at the Evanston Woman’s Club to commemorate International Women’s Day on March 6. 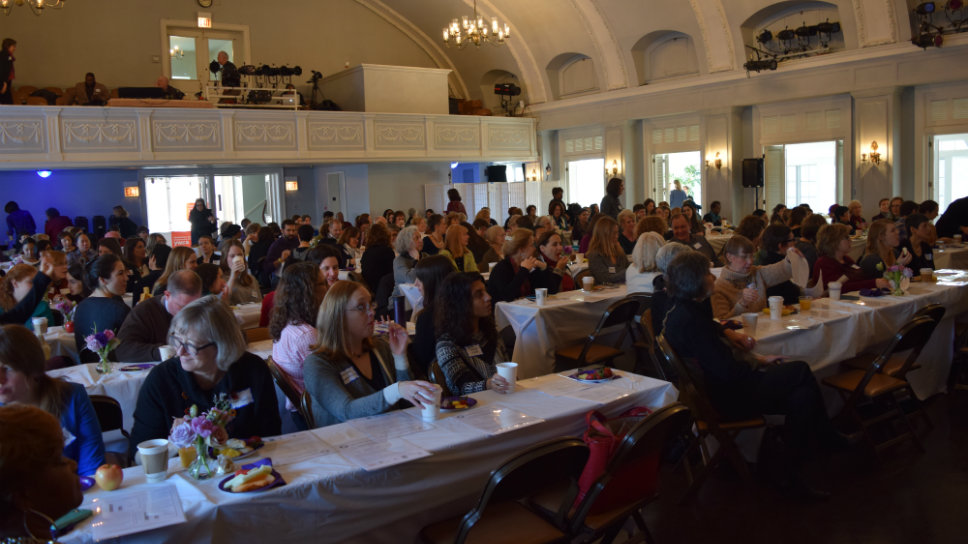 Myers-Powell shared the stage with Kaethe Morris Hoffer to talk about this relevant topic; both women are leaders in the field and advocate the end of human sex trafficking. The event was organized by the YWCA of Evanston/North Shore in partnership with Northwestern University Women’s Center and the Woman’s Club of Evanston.

“It is incumbent upon us to take on issues that are seriously impacting our community,” explained Cece Lobin, Women’s Empowerment Coordinator for the YWCA.

“Sex trafficking is one of the key problems of our times … our goal is bring light to this issue,” Lobin added. More than 16,000 girls and women are sold for sex on any given day, in any given year in Chicago. Many of these women are survivors of sexual abuse.

And Myers-Powell did shed light on this deeply troubling issue, when she spoke candidly about her own experience as a survivor of abuse, drugs and prostitution. An engaging speaker with an incredible life story, Myers-Powell brought humor and courage to the stage when she spoke about this difficult topic.

Born in Chicago to a teenage mother who died when Myers-Powell was an infant, she was raised by her alcoholic grandmother and suffered sexual abuse beginning at age four. At age fourteen Myers-Powell found herself the mother of two children, with instructions from her grandmother to bring home money.

Lacking self-esteem and seeking to escape to an abusive home life, she entered the dark world of prostitution and wasn’t able to escape for 25 years. After being admitted to the hospital for a serious injury, Myers-Powell was directed to The Genesis House, a haven for women caught in prostitution in Chicago.

“I went to Genesis House and everything turned around for me,” she said. “It was women from Evanston and Wilmette who groomed me. Every Wednesday volunteers would come to Genesis House and feed us.” These same women became Myers-Powell’s friends and helped her understand the strength of women

While Myers-Powell shared her unique personal story, Kaethe Morris Hoffer voiced her view that human sex trafficking will only end when the focus shifts from the criminalization of women, to the men who purchase sex.

“Men who buy sex are not naive about the circumstances but they take advantage of other people’s naivety,” Morris Hoffer explained. “The overwhelming actors in the sex trade are the purchasers.”

Myers-Powell noted that the sex trade is a business like any other; it relies on supply and demand. “Imagine a world where there was no more demand to harm or exploit women.”

Since escaping prostitution, Myers-Powell now dedicates her time to educating others about the perils of human trafficking. She is the co-founder and Executive Director of The Dreamcatcher Foundation, a nonprofit dedicated to ending human trafficking in Chicago. Morris Hoffer is the Executive Director at Chicago Alliance Against Sexual Exploitation, a legal services, prevention and policy reform organization working to eradicate sexual assault and prostitution.

Both women urged the audience to continue the conversation with others and help raise awareness and understanding of this complex issue. Morris Hoffer aptly described the everyday reality for women in the sex trade.

“The reality of prostitution is that it is engaged in by people who don’t want to be there and don’t have other options.”

Myers-Powell is also the subject of the new documentary film “Dreamcatcher,” which debuted at the Sundance Festival in January,  and will make its broadcast premiere on Showtime, at 7 pm, on March 27. To learn more about the documentary read what Chicago Sun Times wrote on this topic.

To watch a trailer of the video check out: