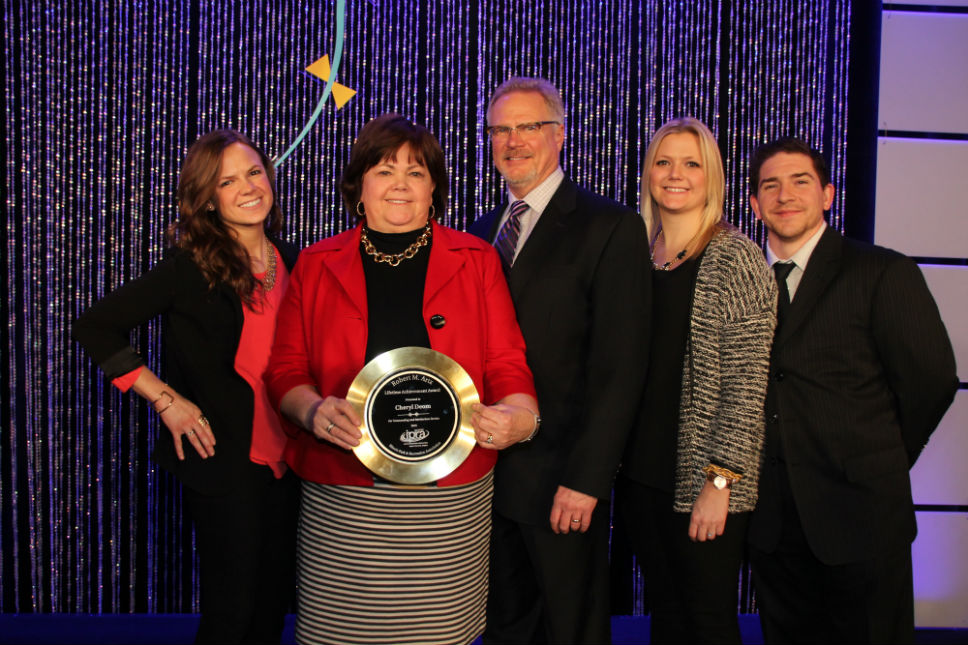 Cheryl Deom accepts her Lifetime Achievement award with her family by her side.

Growing up in Glenview, Cheryl Deom fondly remembers her childhood summers spent at Roosevelt Park, swimming in the pools and attending a wealth of programs at the field house. Even after moving away for college, Deom would come home for summer break and work as a camp counselor. She never anticipated she would return to her hometown to live and work for good, though that is just how things played out.

“When you’re young, that’s the last thing you want to do. You want to go out and have all these wonderful experiences,” she recalled. Though in a serendipitous turn, those experiences did come about in 39 years working for the Glenview Park District through an illustrious career that was recognized by the Illinois Parks and Recreation Association earlier this year when they honored Deom its 2015 Robert Artz Lifetime Achievement award. The title is given to only one IPRA member each year and considered the top recognition for distinguished parks and recreation service in the state.

“Never in a million years did I think I’d get this,” she said of the award, which comes just a few months before her planned retirement in May. It may have been a surprise to her, but Deom’s record speaks for itself. She started with the Park District in 1976 as a recreation supervisor managing youth athletics, preschool programs and art programs. Less than three years later she was promoted to director of the then new Rugen Community Center before becoming a division head for the recreation department in 1981 and ultimately the head of special facilities in 1991 where she has remained for the past two-plus decades.

In her current role Deom oversees the Glenview Park Golf Club and Glenview Prairie Club, Glenview Ice Center and the indoor Glenview Tennis Club, a span that highlight’s the district’s shift, she said, of “being very program-based in the beginning to being more facility-based and expanding into all sectors, north, south, east, and west. … We’ve tried to be responsive to whatever the interests were of the members of our community because nothing makes us happier than to see our facilities well used by the people who live here.”

Deom points to the classic example of the 165,000-square-foot Glenview Park Center, which includes a state-of-the-art fitness club with more than 4,000 members as well as a unique partnership with the NorthShore University HealthSystem that makes it a true community center. “We still have park districts from all over the state coming to look at [how we run it],” she said.

Adding Wagner Farm, the Glenview Park Golf Club and the Schram Memorial Chapel to the Park District’s portfolio over the years were also significant bookmarks, but it’s the addition of the national historic landmark The Grove that holds a special place for Deom. “It’s where I met my husband,” she confessed, noting that the two worked together on an artist-in-residence program based out of the Redfield Estate 30-plus years ago. They have two daughters, and the Rugen Community Center became an important staple for them, though with them now grown, Deom and her husband today enjoy the “peacefulness” of Wagner Farm where they contribute to a community garden plot.

“It’s going to be hard to retire from the Park District because it’s just been such a big part of my life and my family’s life over the past years,” she said, “but it will also be great to pass the baton and share the opportunity with some other young up-and-coming professional who wants to take on the challenge.”

With her new free time, Deom says she and her husband plan to travel more, though she knows she can never fully escape from the work that has had such a large impact. “My oldest daughter just got engaged and told me I could become her full-time wedding planner,” she laughed. “So, I’ll put some of my rusty programming skills back together and see what I can do.”