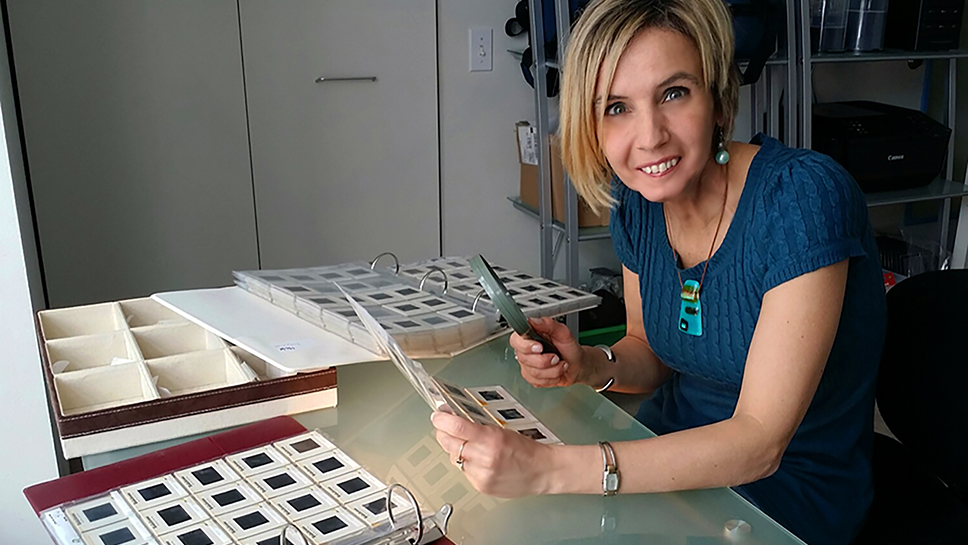 Clara Tomaz created a business out of telling stories after cancer made it hard for her to tell her own.

Born and raised in Italy, Tomaz worked for many years as a high school teacher in Milan until she moved to the United States with her husband and two very young children in 2004, first to upstate New York and then to Wilmette seven years later. All was going well in their adopted country until 2007,  when Tomaz was diagnosed with tongue cancer. Extensive treatments that included invasive surgery left her with a severe speech impediment, causing her to reassess the direction of her life.

“I had a dream in my drawer about working as an artist,” Tomaz said.

While still undergoing reconstructive surgeries, she turned that dream into a reality. Two years after her diagnosis, she enrolled in Rensselaer Polytechnic Institute in Troy, New York, and earned her Masters of Electronic Arts. Then, after moving with her family to Wilmette, Tomaz established a non-profit business called Media 4 Community, which has produced 20 pro bono documentaries for non-profit organizations in the Chicago area. More recently, she started Make Your Movie, a service that organizes family photographs and film and weaves them into a personalized video.

A self described “personal historian,” Tomaz goes to client’s homes and sorts through old pictures and film stored away in the attic or basement, in addition to downloading digital photographs and movies stored on a computer. After sifting through everything, Tomaz transfers old photos and film to digital, and also creates unique videos based on a client’s request.

“It’s a very personal service,” Tomaz explained. She described the Make Your Movie business as one “for families who love their history and want to share it with generations.”

For example, for one Wilmette family of four, each year Tomaz creates a unique movie documenting their lives from their own photos and videos. Wedding anniversaries are also popular requests, as are milestone birthdays.

Some projects span generations. Currently, Tomaz is helping a client collect all of her family’s photographs stored away in the attic and basement of her house in Skokie. So far, Tomaz has collected 3,200 old photos which she is transferring to digital with plans to make a video. Tomaz recalled her client saying “she could sleep well at night knowing that the photos are well taken care of.”

The compassion that Tomaz brings to her business, stems from her own unique history with cancer.

“My cancer made my life more challenging due to the speech impediment. [But] it has improved my life because I was pushed to use my talents in a new way. I never envisioned that I would be able to love my career in this way. I wouldn’t change anything. Cancer has actually made my life better,” Tomaz explained.

“Making movies is my talent and I wanted to make movies for the under represented,” she said about her videos for non-profit organizations. “I was looking for a way to make movies and to make some people’s lives better.”

And that may be the best way to describe Tomaz’s true talent: her ability to tell other people’s stories while improving their lives. Through both her not-for-profit Media 4 Community and Make Your Movie, Tomaz makes the visual medium more accessible to ordinary people.