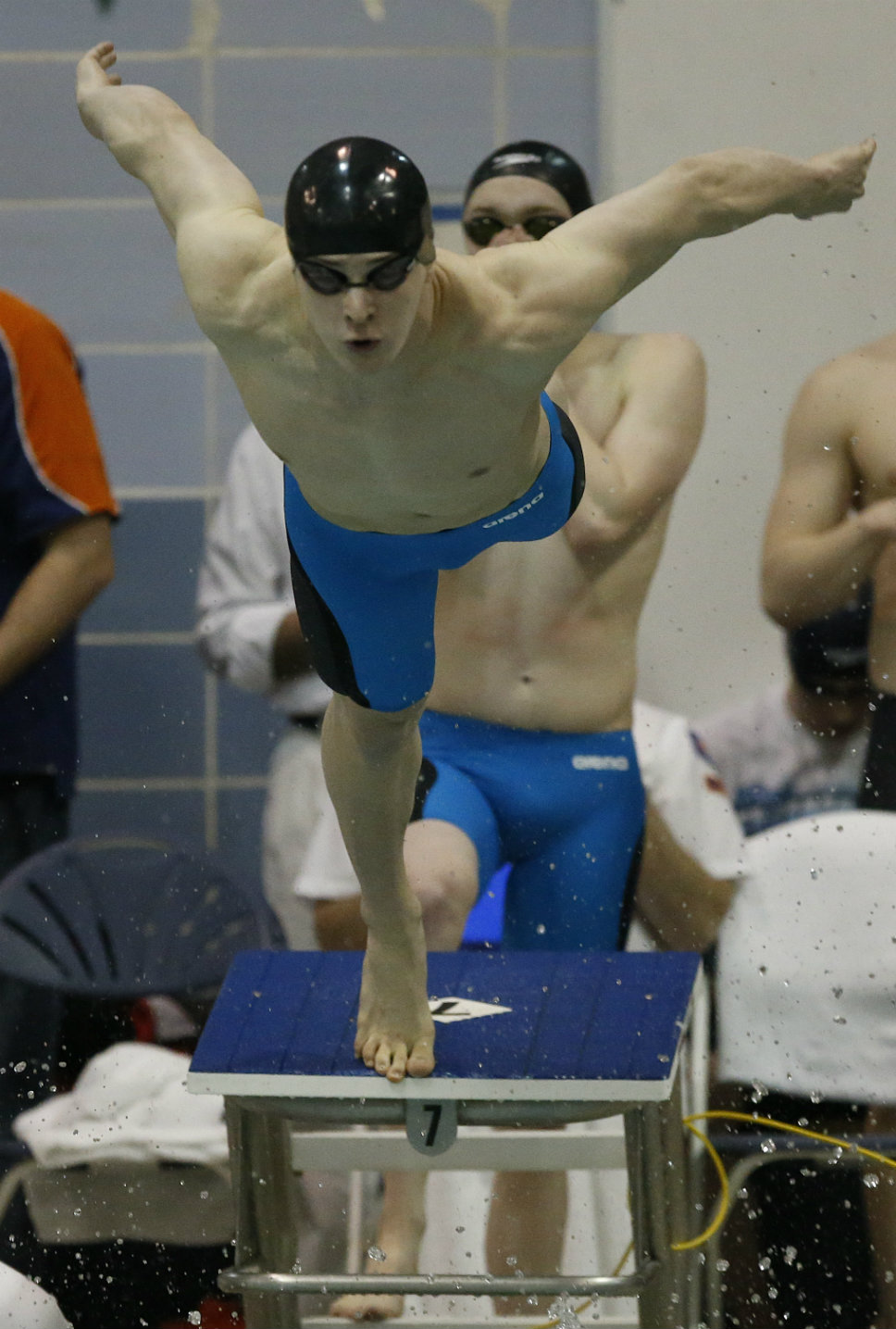 Symen Ooms of the Scouts takes off in the 200 medley relay. The senior took ninth in the 50 free. Photography by Joel Lerner

Air Force Academy cadets first caught Symen Ooms’ attention years ago in Colorado. He was at a swim meet at the time, a competitor in the 9-10 age group.

Now a Lake Forest High School senior, he recalled the moment at the state swimming and diving meet at New Trier on Feb. 28.

“Watching them walk … they were my heroes then,” said Ooms, who hopes to be an AFA appointee. “They’re still my heroes.”

The Scout deserved a congratulatory salute for a number of reasons last weekend. Ooms swam faster than 21 seconds (20.99) in the 50-yard freestyle for the first time in his life in the state prelim session on Feb. 27. He would finish ninth (21.23) in the event in a B-final heat a day later, after swimming the second leg of the 12th-place 200 medley relay (1:36.7, with classmates Daniel Smith and Michael LeMay and sophomore Dylan Boyd).

“I was really psyched [after clocking the 20.99], really happy about the time,” Ooms said after his 50 free —and final two laps as a Scout — on Feb. 28. “Emotional race, just now. End of my high school career.”

“It’s been quite a ride,” Ooms said of his three years under Scouts swim coach Cindy Dell.

Alex Streightiff’s journey to a fourth-place finish in diving at state began with an uh-oh moment.

“During warm-ups, seeing the divers, I was thinking, ‘This is going to be a little tougher than I thought,’ ” the LFHS junior said after scoring 458.25 points in the finals session on Feb. 28. “It was a little intimidating. There were a lot of really good divers.”

He was one of them. The son of a former New Trier diver (Scott Streightiff) and the nephew of another former New Trier diver (Joel Streightiff, of Park Ridge), Alex did not start competing off boards until his freshman year. His mother, Alicia, had urged him to give the sport a try after watching him boing-boing on a backyard trampoline. Her quick-learning son finished an impressive 13th at state as a sophomore last year.

A shin injury hampered the beginning of Streightiff’s junior season. By the time the big meets rolled around, he was trying new stuff, taking risks. Judges rewarded him.

“I learned a lot, learned how important it is to be mentally tough,” said Streightiff, who praised his classmate and fellow diver, John-Michael Diveris (ninth place at state, 425.4 points), and his diving coach, Pam Uhrik, for helping him stay calm and in control between plunges.

Smith sped to the team’s second-best individual showing, touching fifth in the 100 backstroke (51.26). That matched his place in the same event last winter. He took 12th in the 100 back (52.04) in his sophomore year. He totaled seven state medals (four as a relay member) in his four-year varsity career.

“A workhorse,” Ooms said of the Massachusetts Institute of Technology-bound Smith. “He was one of our workhorses.”