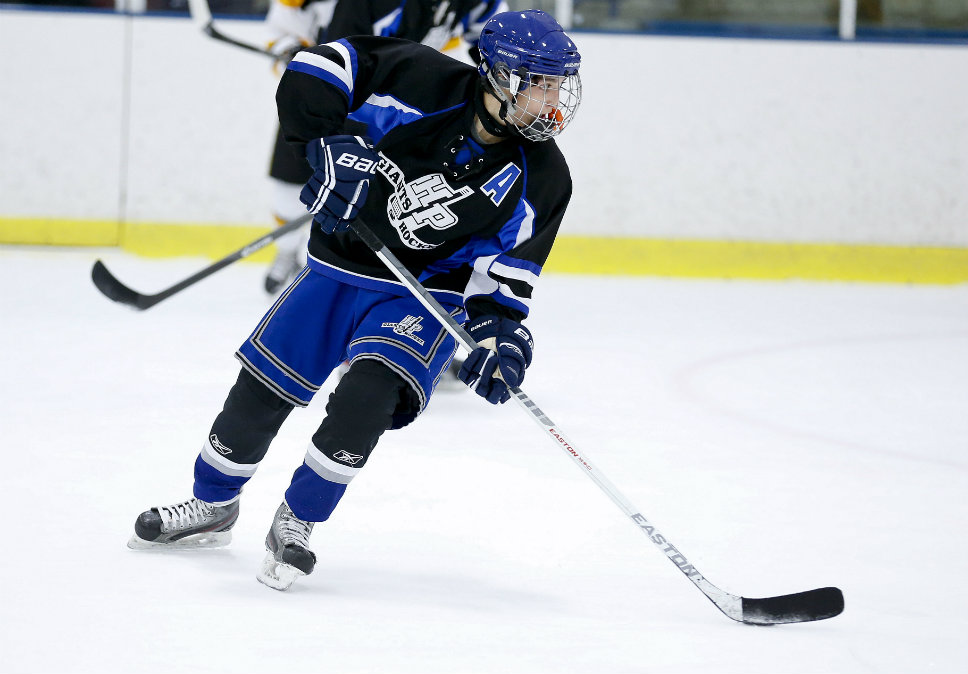 Kieran Jagadeesh handles the puck for the Giants. He has 26 goals and 28 assists. Photography by Joel Lerner

He wanted to be a part of that world.

He entered it at times … without permission.

“I interrupted the hockey lessons,” a smiling Jagadeesh recalls. “It was on the other side [of a partition]. I somehow made it over to the other side. It got to the point where they told my mom [Caroline], ‘Your son cannot interrupt anymore.’ ”

If you cannot interrupt them, join them. Jagadeesh did just that. The Learn to Skate boy learned to dangle and deke and pass and shoot.

Jagadeesh is a junior at Highland Park High School, a 5-foot-7, 125-pound forward for a 35-10-3 Giants hockey club. To say Jagadeesh loves hockey is to say a hungry dog loves a hunk of steak. He has played in each game this winter, scoring 26 goals and dishing 28 assists. His assist total ranks second among teammates, his point total (54) third. He is eel-slippery on the ice, a cat-quick gnat on blades. Go ahead, try to hit him. Expect to hit nothing but … air.

“He rarely gets hit,” Highland Park coach Sean Freeman says. “If he feels like he’s about to get hit, he has this sense, this ability, to get out of the way, to bob and weave and avoid contact. He’s like a matador out there. Lots of oles when Jiggy plays.”

Highland Park and New Trier Blue battled in a three-game series for the championship of the Illinois High School Hockey League North Central Division. It ended on March 1, with NT Blue winning the series 2-1 at West Meadows Ice Arena in Rolling Meadows. HP won the opener 5-2 on Feb. 24. NT topped HP 4-2 on Feb. 26 and edged HP 4-3 in overtime on Feb. 28.

Jagadeesh, an alternate captain, slid two assists in Game 1 and struck for two goals in the finale.

“Goals don’t matter to him,” Giants senior defenseman Reid Kahn says. “His focus is on the team, always on the team. He’s about the team, team, team. So unselfish. The nicest guy, too. He’d give you a fun body check into some lockers at school, and then he’d give you a high five. He is a leader, carries himself well. As a player, he is incredible.

“What he does on the ice,” Kahn adds, “is straight magic.”

A typical Jagadeesh pass is not just slick. It is also an accurate tape finder, a magnetic disk from a magnetic player. His linemates are Gavin Proeh and David Shapiro. Proeh leads the team in points (79) and assists (39); Shapiro paces the team in goals (49).

“I coach all-star teams,” Freeman says. “All-stars want to play alongside Jiggy. Everybody wants to play with him. He’s smart, unbelievably smart. He sets players up. Sets everybody up. We call him ‘Old Country Buffet,’ because he’s always feeding the puck to David and Gavin.”

One helping of Jagadeesh on the ice is not enough. It is never enough. He moves the puck with equanimity, skates relentlessly, competes fearlessly. He will dazzle you until you can’t breathe.

“I thought hockey was awesome, as soon as I started playing it,” Jagadeesh says. “I wanted to play it every day. I love the game. That feeling you get when you score or when you watch one of your teammates score … there’s not a better feeling in sports. It’s a rush of energy. It’s a great feeling.