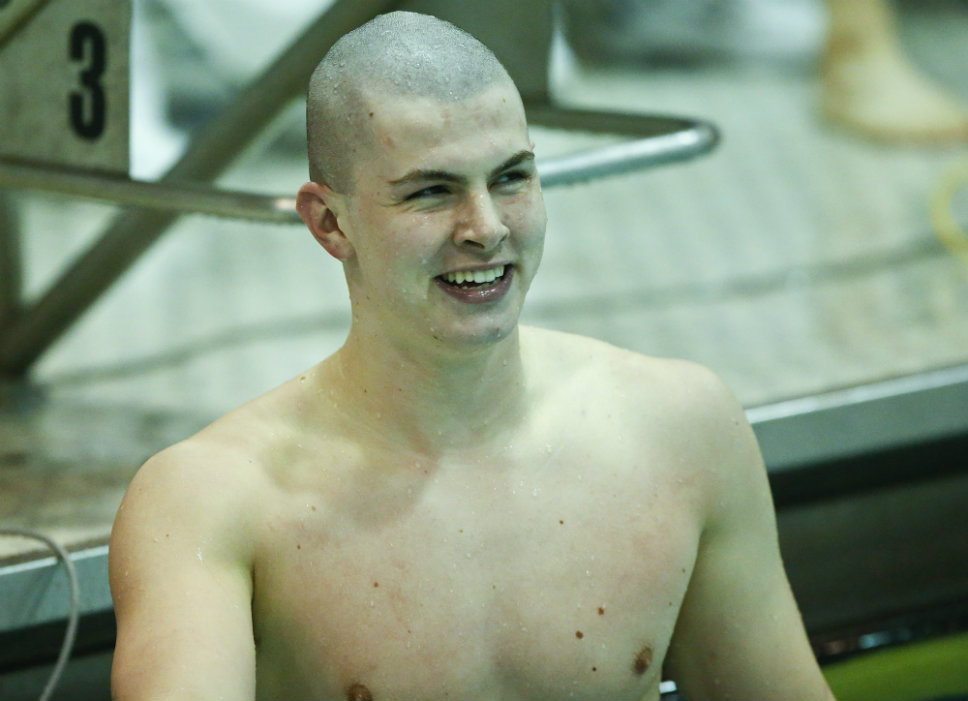 Loyola Academy’s Christopher Kearney reacts to his seventh-place finish in the state 100 free. The junior was third in the 200 free. Photography by Joel Lerner

Does anybody know where Christopher Kearney is?

The Loyola Academy junior swimmer was supposed to be posing for a photograph with 11 other swimmers after the 200-yard freestyle race at the state meet at New Trier on Feb. 28. The Rambler had placed third in the event in a lifetime-best 1:39.1 — considerably faster than his state seed time of 1:42.5.

Some of the 11 sat. Some stood. The photographer could not do his thing. They all waited.

“He was out on deck, so excited,” Hengelmann said of Kearney’s legitimate excuse for being tardy.

The race plan for Kearney, a strong back-half swimmer in the 200 free, was to attack the first 100 yards. He followed the plan, perfectly and swiftly.

“He was aggressive early,” Hengelmann said. “He hung with the big boys. For a brief while there, I thought he’d take second. Had the race been a little longer …

“I’m so proud of him, so happy for him. He’s such a genuinely nice kid. He worked hard to get to where he is. Third place, wow.”

The result and time surpassed Kearney’s goals. Kearney would touch seventh in the 100 free (46.03) later in the meet, topping his eighth-place showing (46.57) in the event a year ago.

“Extremely happy,” he said of his feat in the 200 free. “I’m perfectly content with that.”

Loyola Academy sophomore Christopher Canning also collected a bronze medal at state last weekend. He earned it in diving (476.2 points), a year after bowing for a fourth-place prize in the event. His teammate, senior Ryan Nash, placed eighth (442.45), his second straight top-12 state finish in diving.

“Lots of big dives done well,” Ramblers diving coach Tony D’Amico said of the talent-drenched field of finalists, led by Marian Catholic senior Joey Cifelli (state-record 555.4). “I told Ryan, ‘Lay it on the line, don’t play it safe, get after it, be aggressive.’ That’s exactly what he did.

“I told Christopher, ‘Do things you know. Be that graceful diver that you are.’ That’s exactly what he did.”

Canning could not have ordered up a more valuable board mate than Nash. They pushed each other. They encouraged each other. Nash made Canning laugh. Laughter lessens pressure in a pressure-packed discipline.

“Ryan is sarcastic. He also tells a lot of jokes,” Canning said. “The way he reacts to situations … I enjoy that side of him, too. He always was good at reminding me, at meets, to look forward, to forget about whatever happened in the past.”

Notable: Kearney did not to attempt to qualify for state in the 200 free last winter. The Ramblers needed him as a relay member at a sectional, and he helped all three relays qualify for state. LA’s 200 and 400 free crews finished 16th; the team’s 200 medley unit placed 19th.