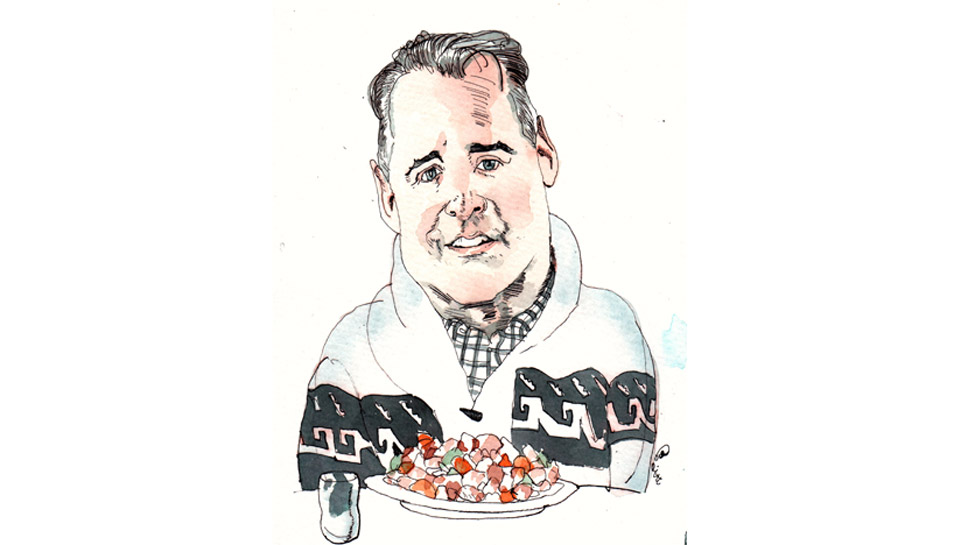 We’ve just sat down for brunch at Bobby’s in Deerfield, a restaurant replete with the trappings of an American bistro — red napkins, orb-like chandeliers that look like dandelions ready to be blown into the wind, a thornless rose at each table — when the local developer, Highland Park native, and president of The Jacob Companies admits that the term leaves something to be desired.

Perhaps the home builder wants to think of bustling houses with happy kids, not ones whose best days are behind them. Regardless, the waiter takes our order. Jacobs alights on the crab salad, which is not on the menu. Can the chef make it?

Returning from the kitchen, the waiter brings good news. Shielding his mouth from the other diners, he silently mouths the word “yes.”

What appears is a beefsteak tomato stuffed with crabmeat, peppers, onions, and oranges. The well-dressed Jacobs, a self-described “clothes nut,” tells me he was thrilled when his wife, a fashion stylist, started working for the Trunk Club in downtown Chicago. (He’s now a walking billboard for the men’s clothing service, wearing the clothes from head to toe; even “down to my underwear and socks,” says Jacobs, semi-jokingly.)

Similar to the Trunk Club, which only offers its clients top-of-the-line clothing, Jacobs knows a thing or two about quality.

“There was a joke that there were four builders on the North Shore, and they had four corners,” explains Jacobs of the earliest days. “Well, ours was always the most expensive. But we sold them better than the guys that were less expensive because it was a better quality product.”

They’ve also enjoyed longevity. When you ask them how they managed to weather the downturn, you need to be clear, because they’ve been in business since the Great Depression. When the Jacobs say they have “deep roots” in the North Shore, they’re talking Sequoia tendrils, with 2015 marking the 80th year of the company.

The client remembered him as the little kid who was always running around the office when he and his wife visited. They still lived in the Jacobs-built house and had nothing but nice things to say, but they had an issue with some of the windows. Jokingly, the client asked if they were still under warranty — they had been living in the house for more than 40 years. Jacobs told him they’re not, but he would send someone over to check it out.

“Well what’s it going to cost me?” asked the client.

Not a dime, replied Jacobs.

“You send a guy over, it’s the way things should be done,” says Jacobs, recounting the story. “Anybody we deal with I always tell them: I don’t need a contract. Shake my hand, look me in the eye, and say ‘We got a deal.’ We’re done. That’s how my dad did business. That’s how my grandfather did business.”

In the late 40s, Albert Jacobs (Keith’s grandfather) purchased a tract of land in Bellwood and proceeded to sell homes for $12,000. An eccentric salesman, Albert would ask for the client’s shoe. (“One of his great lines,” notes Jacobs.) They would leave, think about buying the property, but would always return for the shoe — and hopefully a firm handshake.

The second generation was Albert’s sons: Marvin and Joe. Marvin, a Jewish, decorated paratrooper in World War II who received the Purple Heart for liberating prison camps in Germany, returned home after the war and entered the family business. Marvin began by driving clients up the dirt roads to the company’s properties, but quickly got a handle on the developer side and started with a plot of land in what is now Northbrook.

At the time: “there was nothing past Waukegan Road,” notes Jacobs. “It was all farm land.”

When Marvin bought the tract of land, he put Albert in the car and drove him up along the barely formed roads. When they arrived, father looked at son in disbelief.

“What the hell did you buy?” he asked him. “You know how far this is? No one is going to live here.”

Since then, the company has built a series of successful Northbrook developments that account for more than 5,000 luxury homes in and around the North Shore. They were the first to offer customized floor plans, air conditioning, and the first to import materials to satisfy customer preferences.

That reputation also helped them weather the most recent financial crisis, what will eventually be referred to in history textbooks as the Great Recession. The last time Jacobs can remember a housing scare was when he attended Indiana University. It was the 1970s, and interest rates were over 20 percent.

“Maybe you should look into something else,” said his mother, worried.

But Jacobs had already been working for the company since he was 16, sweeping out the houses and learning the trades — carpentry, plumbing, electrician — during the summer. He was hooked.

“I’m like a Wallenda,” adds Jacobs. “They were born to walk across tight ropes. I was born to build.”

When the housing bubble collapsed, Jacobs was in the middle of a big project in Vernon Hills. Wintrust Bank, true to name, told him they believed in him. The 132-luxury row-home community was finished, and both bank and developer came out more or less unscathed.

“What I told everybody when this all started — I told them, I want to be the Forrest Gump of the building industry,” says Jacobs, reflecting on the financial crisis. “I’m not the biggest genius. I’m really not. But, the fact that Forrest Gump went out in a shrimp boat in the middle of a storm and was the only one left that came back to the dock and flourished from it. That was my philosophy.

And it paid off,” he adds. “Because a lot of the people that were here — competitors, quasi-competitors — left the market. It put us in a good spot.”

At 92 years old, Marvin now holds the title of chairman and CEO, and calls his son every day to check in.

“He’ll be within $5 of the very elaborate, computer-driven spreadsheets we have now on the back of a napkin in five minutes,” Keith says.

With at least four new communities in Deerfield, Highland Park, and Northbrook underway, and a partnership with the architecture firm Pappageorge Haymes in line to build at least 250 homes, the future has never looked better for Jacobs. With the future in mind, I ask him if there are any plans for his kids to join the business.