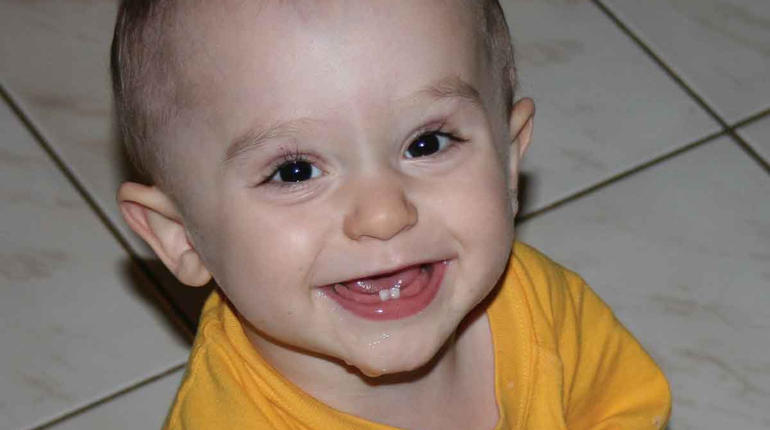 Benjamin Kingan, the Deerfield toddler who died in 2009 purportedly at the hands of Melissa Calusinski.

Lake County State’s Attorney Mike Nerheim is adamant he will not reopen the case of Melissa Calusinski after an investigative report was featured on CBS’ news program “48 Hours” on Sunday night.

“There’s no new evidence, it’s the same story,” he declared to reporter Erin Moriarty at the end of the one-hour broadcast entitled “Blaming Melissa.” Though the episode attempted to show both perspectives, Nerheim was clearly in the minority as mounting support for Calusinski questions if she is innocent of killing Deerfield toddler Benjamin Kingan on January 14, 2009.

At the time, the then 22-year-old was working as a caretaker alongside her sister Crystal at Lincolnshire’s Minee Subee Daycare Center when she noticed the boy suddenly lost consciousness and started “foaming at the nose.” Although Crystal Calusinski stepped in to perform CPR, the 16-month-old died a few hours later. The original Lake County Corner Dr. Eupil Choi determined it was the effect of blunt force head trauma and a fractured skull, both fresh wounds incurred at the daycare, he said. The Lake County Major Crimes Task Force started interrogations two days later, interviewing every Minee staffer but zeroing in on Melissa Calusinski, the last one in the room with the toddler.

For 14 hours she was questioned with no parents or lawyers present, no food or bathroom breaks and “emotionally exhausted” after not sleeping for two days while trying to process the boy’s death. Calusinski professed her innocence 79 times before investigators started to apply pressure, telling her, “We’re not going anywhere until we get the facts.” By the 14th hour, she admitted she threw the baby to the floor in a fit of frustration, demonstrating the act to the police with a stuffed animal. Though Calusinski soon recanted, citing a coerced confession, the damage was done. After a trial in 2011, it took jurors just seven hours to convict the Carpentersville woman of first-degree murder. She was sentenced to 31 years at the Logan Correctional Center in Lincoln, Illinois.

Although Benjamin Kingan’s parents (who declined to be interviewed) and Assistant State Attorneys Matt DeMartini and Steve Scheller still believe this to be an open and shut case, a number of sources have stepped forward to question the verdict against Calusinski who had no previous criminal record. One is former Chicago Tribune court reporter Ruth Fuller who has been following the case since 2009 and called it “one of the most troubling confessions I’ve ever seen,” and criticizing investigators for the rough interrogation “of a woman who couldn’t handle it.” Part of that centers on Calusinski’s low verbal IQ that disables her from fully expressing herself or understanding others. The most significant skeptic though is Dr. Thomas Rudd, the newly elected Lake County Coroner who received urgent pleas from Calusinski’s father to look at case files.

When he did he found Choi’s original reports to be “shocking … The [evidence was] the exact opposite of what was written,” he said. “I could not believe what I was seeing.” At the heart of Rudd’s discovery was the medical evidence that Benjamin had suffered an old brain injury, telltaled by a 4” x 4” membrane “scab” and iron deposits, which he called “highly significant” and believes was the contributing factor in the toddler’s death. Rudd’s findings were supported by a consult from former Cook County Medical Examiner Nancy Jones and a signed affidavit by Choi stating he erroneously missed that crucial piece.

In fact, just two-and-a-half months earlier daycare workers noticed a bump on Kingan’s head and notified his mother who had her son evaluated by a pediatrician. In the weeks since the exam the baby was extremely lethargic and violently ill just two days before he passed away. He also had a habit of throwing his head back and “even the most minor injury on the day he died could have had an impact,” said Rudd on “48 Hours”.

“Her false confession doesn’t fit the evidence,” said Calusinski’s new power lawyer Kathleen Zellner (famous for helping to exonerate Ryan Ferguson) who is requesting a “fair trial” for her client with testimony from a panel of experts. In fact since he was elected in 2012 Nerheim has assembled an independent panel to review cases like these after a number of wrongful convictions in the county. But so far he isn’t budging for Calusinski until new evidence is presented, siding with the Appellate Court who denied an earlier appeal.

“Believe me, if there is new evidence, I’ll review it,” he told the Chicago Tribune. For her part, Zellner seems poised to make the next move meaning this case might not be over just yet.