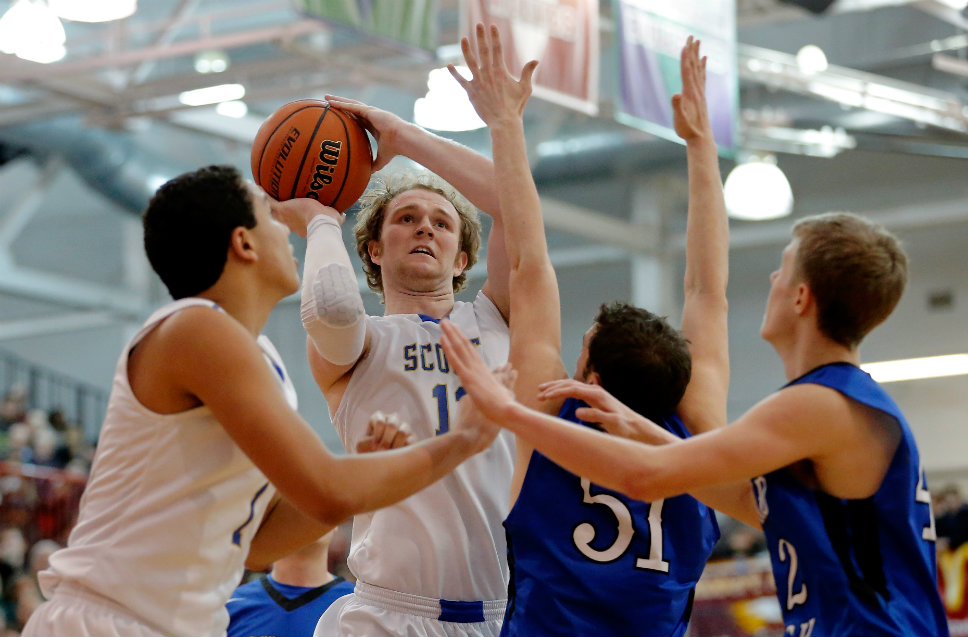 Evan Boudreaux has reached another milestone.
And, it’s a fairly novel one.
Let’s call it (while we can), “2001: A Basketball Odyssey”.
The journey continues for this Lake Forest High School standout.
In a Class 4A Mundelein Regional semifinal win over Glenbrook South 60-50 on March 3, the 6-foot-8 Dartmouth College recruit tossed in 26 points.
Boudreaux currently is sitting on 2,001 career points.
He will be looking to add to that impressive number on March 6, when the Scouts (25-2) take on either Highland Park or New Trier in the regional title game at 7 p.m.
Boudreaux had a fairly typical outing against the Titans (10-18). He also pulled down 12 rebounds and blocked three shots.
His inside sidekick, junior Lorenzo Edwards, wound up with 12 points, seven rebounds, four blocks and four assists.
Ace outside shooter Noah Karras contributed 14 points. He was 2-for-5 from three-point distance.
Glenbrook South was led by junior Jimmy Martinelli. He had 12 points, while seniors Sean McDonagh and Chase Daniel ended up with nine points each.

Evanston Regional: The host Wildkits are set to meet Maine South in the championship game on March 6.
In semifinal round action on March 3, Maine South (26-3) topped Glenbrook North 47-28 in game one, while Evanston (19-8) ousted Loyola Academy 51-36 in the nightcap.
The Ramblers had their five-game winning streak snapped. They finished the 2014-15 campaign with a 17-13 record.
“Our offense wasn’t real crisp tonight,” lamented LA head coach Tom Livatino. “You have nights like this.
“And, of course, Evanston had a lot to do with that,” he added.
Senior guard Michael Mangan, who will play his college basketball at the University of Rochester, was LA’s main source of offense. He tallied the team’s first seven points and ended up with 15.
Most of his points came on drives to the basket and at the free-throw line.
“I was trying to attack their defensive pressure,” said Mangan, who earned all-league honors along with junior Brandon Danowski. “I tried to be physical.”
“Mike is a beast out there,” said Livatino. “He was a load all year.”
After a scoreless first half, senior Peter Poggioli came alive in the third quarter by tallying seven points. He finished the night with 10 points and seven rebounds.
“We were able to get back in it in the second half,” said the 6-foot-5 Poggioli, who hit two free throws to cut the deficit to seven points, 41-24, with 3:42 remaining in the third quarter. “We made a run at them.”
Poggioli, a pitcher for the LA baseball team, displayed his offensive versatility by knocking down two triples.
“Peter had a great second half for us,” said Livatino.
This was the second time this season that the Ramblers came up short against Evanston. In their first meeting — on Dec. 20 — they lost 49-39.
“Tonight was pretty much the same exact game,” said Livatino, an Evanston High School graduate.
Meanwhile, Glenbrook North capped off its season with a 12-16 record.
The Spartans trailed 20-4 after one quarter and never recovered.
Senior Pat Hamilton, who made the all-CSL North team, finished the game with team highs in points (10) and rebounds (4).
Without question, Hamilton came into his own this season. He averaged 18.4 points per game. And he was outstanding at the foul line: 63-for-72 (88 percent).