The Titans came up with one of their best efforts of the season on March 2 in a play-in game at the Class 4A Mundelein Regional. Wearing their blue road jerseys with gold trim, the Titans took down higher seeded Carmel Catholic 70-60.

And yet, one of the keys of the game was Daniel’s defensive work against Division I prospect C.J. Duff. Daniel didn’t shut him down, but he did contain him.

The 6-foot-2 Duff, a Western Illinois recruit, didn’t really catch fire — until it was too late for the Corsairs (11-20). The smooth and talented guard, who drives to the basket as well as he shoots the three, scored eight of his game-high 22 points in final four minutes of the game.

By that time, the Titans had a firm grip on the game.

“But I was excited about defending a guy like him,” the GBS senior added. “He’s real strong. He’s real talented. I just tried to play to the best of my ability.”

Daniel turned in a complete performance. His 15 points was a season high.

“I was shooting with confidence,” said Daniel. “Not thinking too much. Just shooting.”

Widner liked what he saw from his 6-1 shooting guard.

“When he sets his feet, he can really shoot the ball,” said the GBS coach. “He hasn’t score a ton of points for us — but he’s a great defensive player.”

Like Daniel, Martinelli put together a solid all-around effort. The 6-6 all-conference selection was brilliant in the third quarter: eight points, seven rebounds and two blocks. The junior standout didn’t score in the fourth quarter, but he had two assists.

“I came out in the second half with a lot of energy and fire,” said Martinelli.

Sharing is good. And the Titans did plenty of it in this one.

“It’s way easier to make an extra pass, when the guy that you’re passing to is hitting shots,” said Widner. “And tonight our shots were going down.”

“We came out with confidence,” said Martinelli. “We got some easy shots early and said, ‘we got this.’

“And it didn’t matter who was taking the shot,” he added. “Everybody was shooting well.”

The Titans are scheduled to face Lake Forest in tonight’s regional semifinal game at 7 p.m. 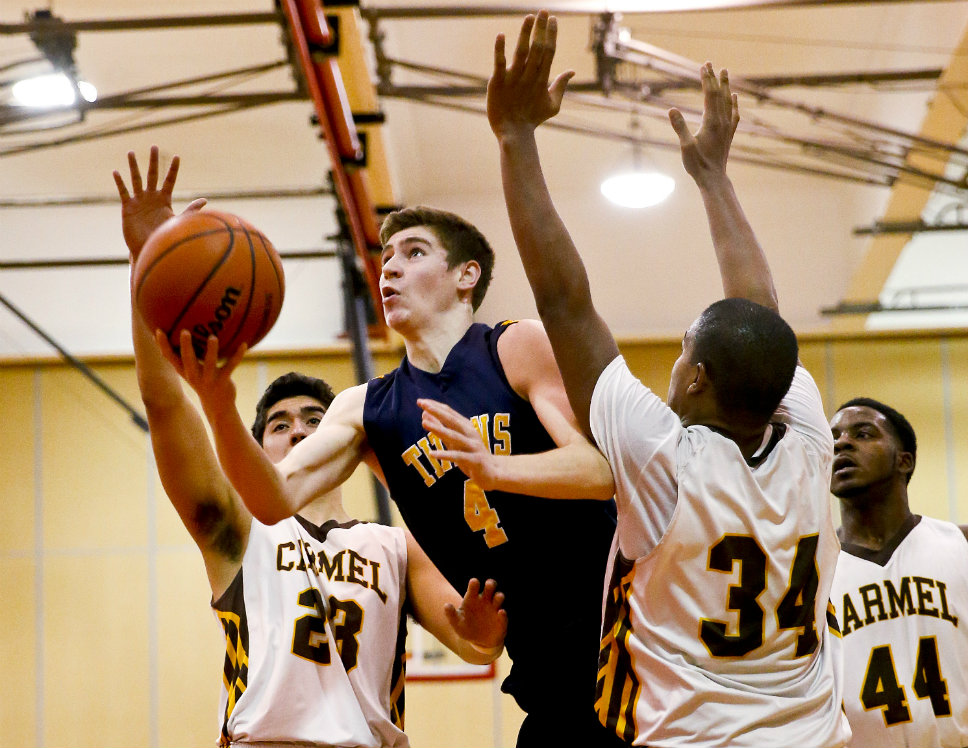 Glenbrook South’s George Mavrakis drives to the hoop against Carmel Catholic in a regional play-in game at Mundelein. Photography by Joel Lerner 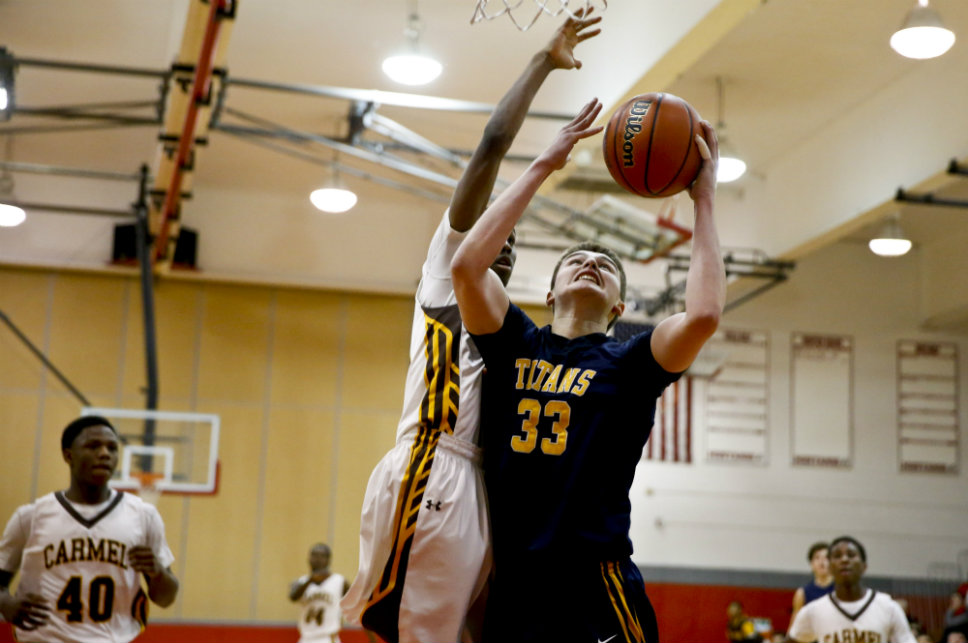 Jimmy Martinelli of the Titans tallied 20 points in the win over Carmel Catholic. Photography by Joel Lerner 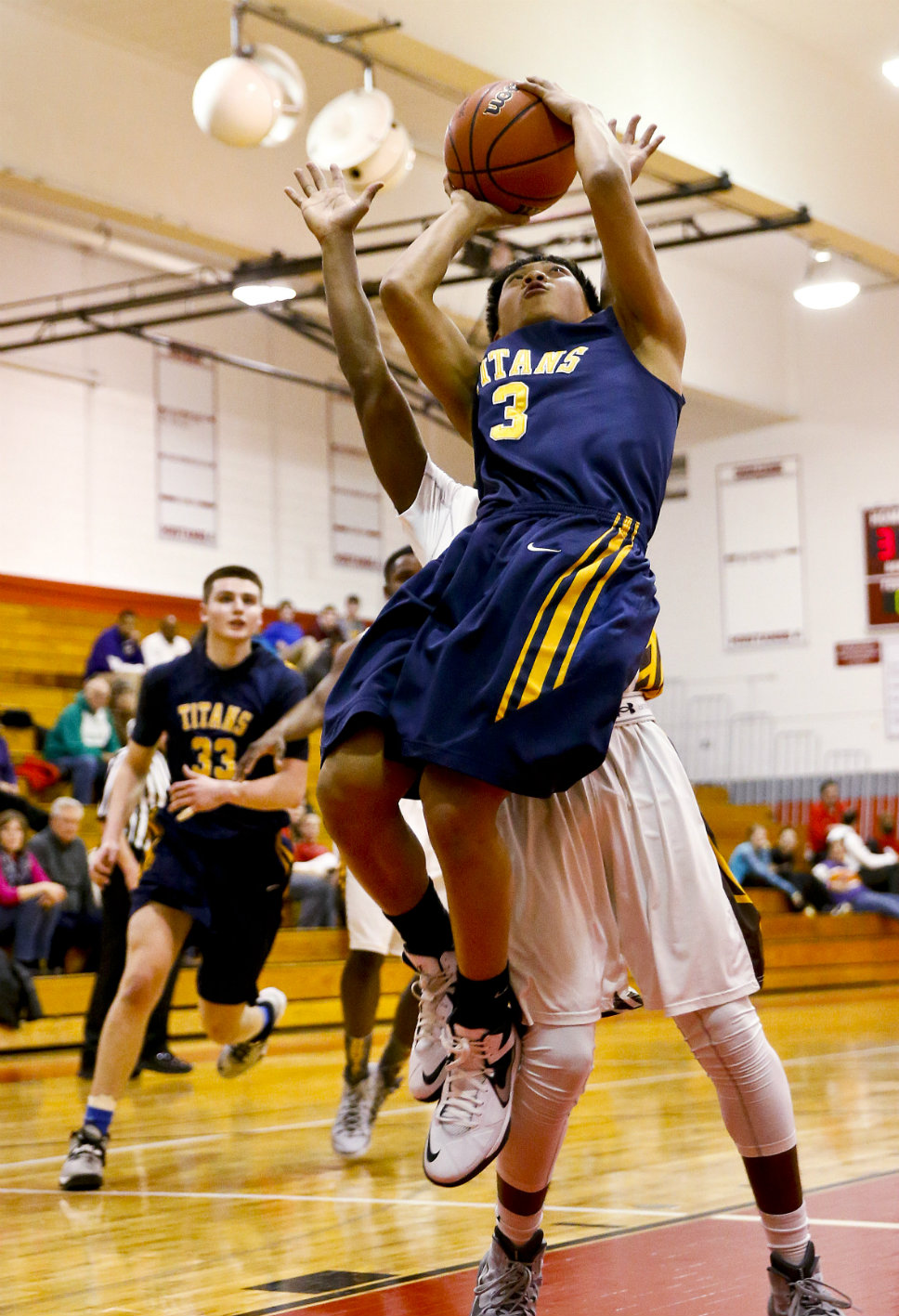 Glenbrook South’s Coby Racho shifts his body to score a bucket inside. Photography by Joel Lerner 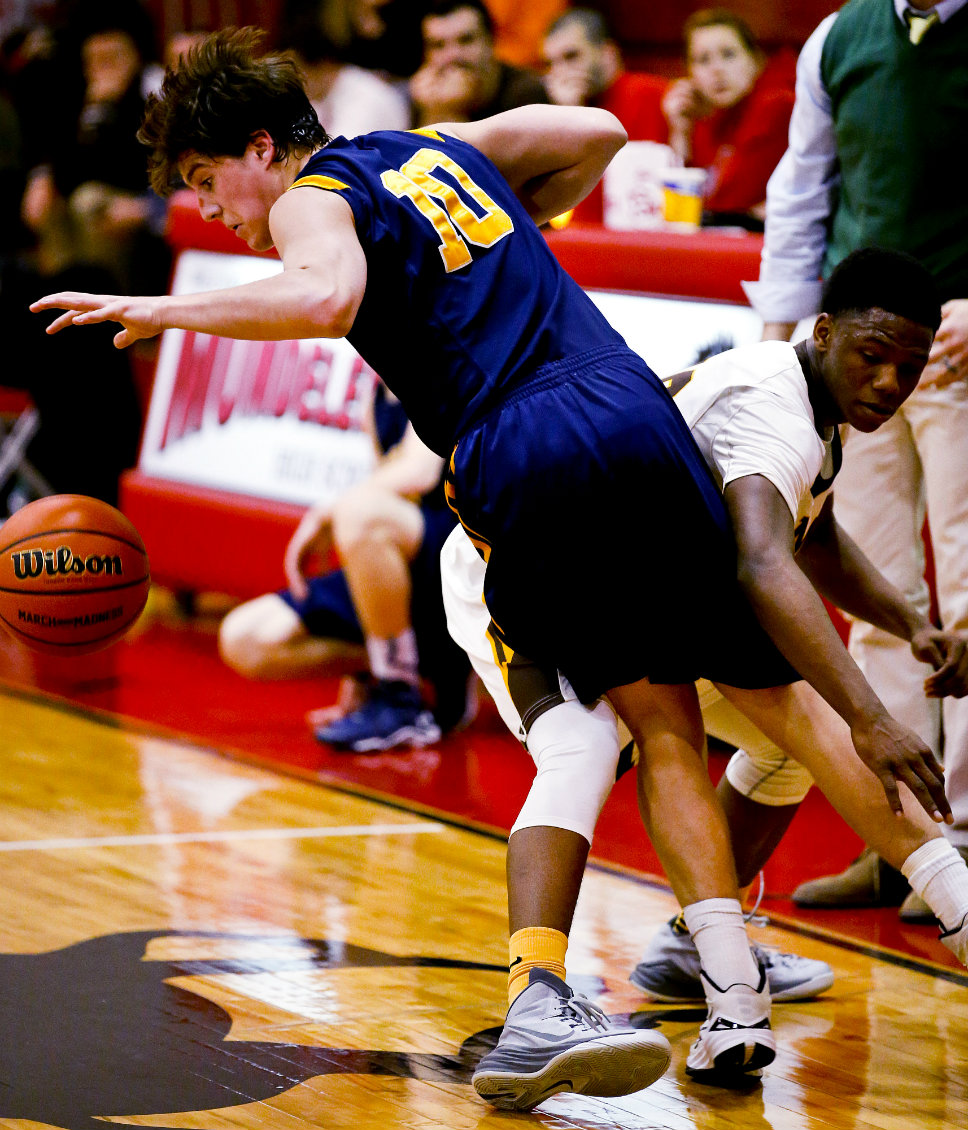 Chase Daniel of the Titans (No. 10) retains possession during action against Carmel Catholic. Photography by Joel Lerner 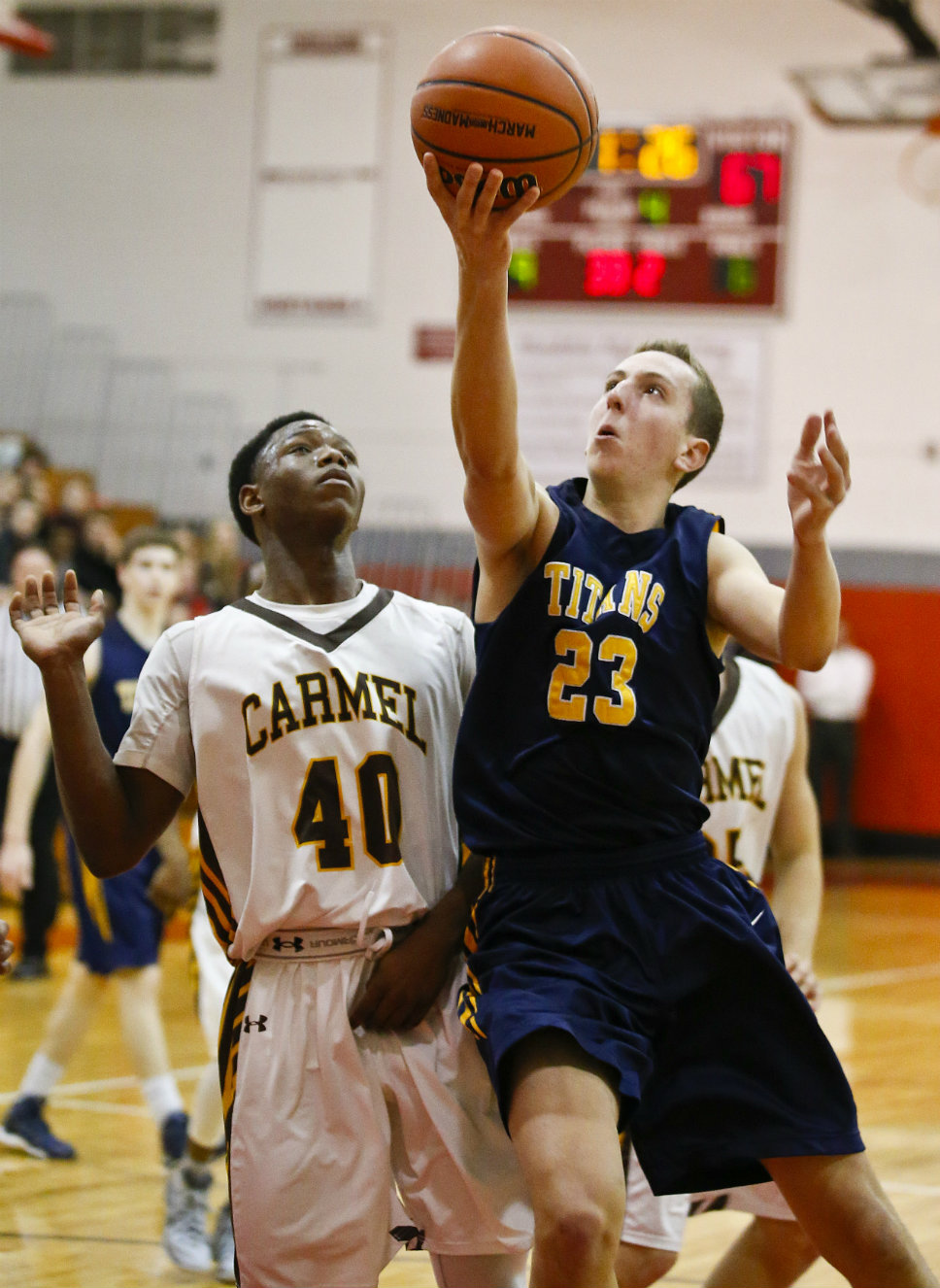 Evanston Regional: James Karis continues to be a “future” player to watch for Glenbrook North.

The 5-foot-9 sophomore guard proved why on March 2, when his reverse layup and free throw with three seconds left in regulation lifted the Spartans (12-15) to a 62-60 victory over Mather (14-9) in a play-in game at the Class 4A Evanston Regional.

With that three-point play, GBN earned the right to take on Maine South in a regional semifinal on March 3 (6 p.m.). Karis finished the game with 14 points to go along with six rebounds. 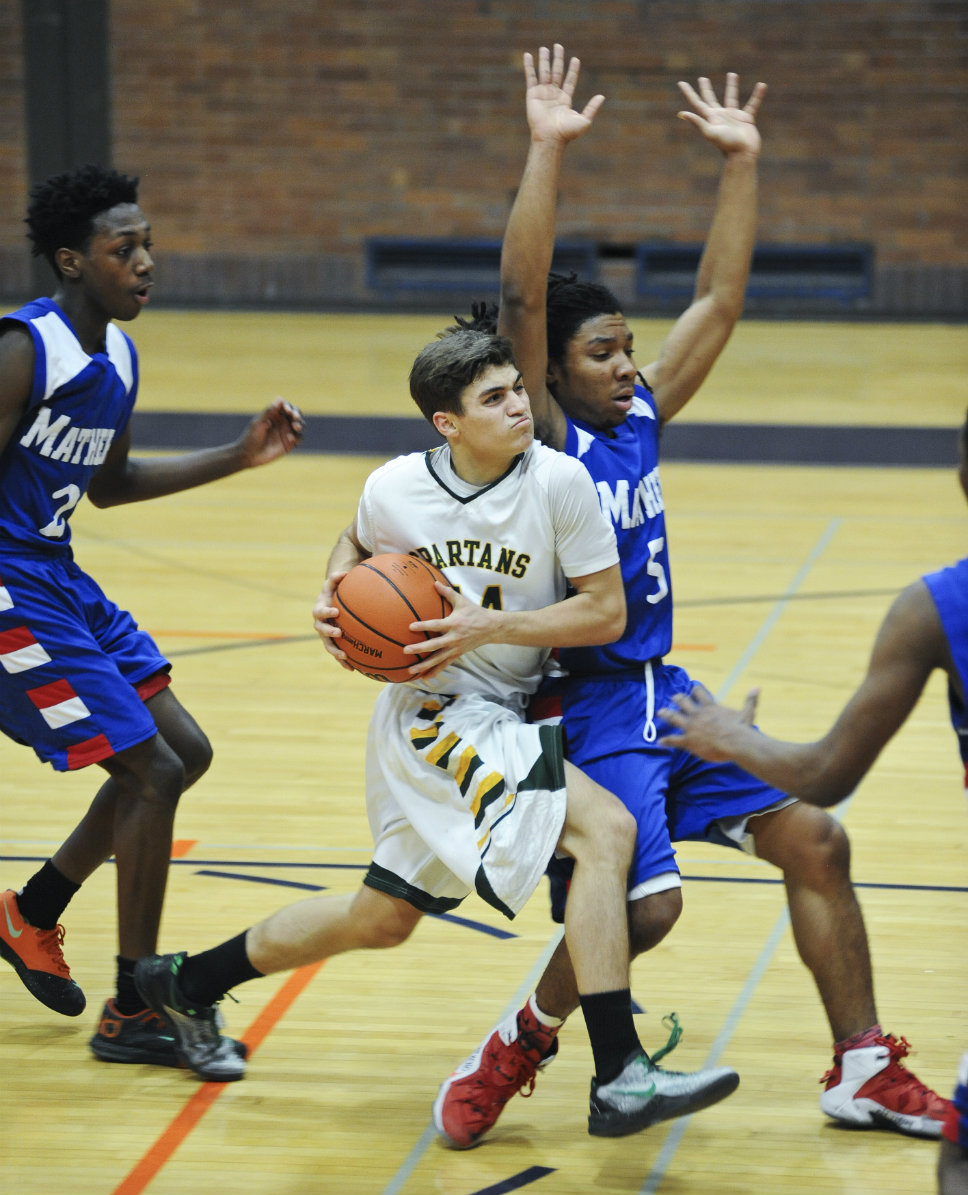 Glenbrook North’s James Karis drives to the bucket in his team’s win over Mather in a play-in game at the Evanston Regional. Photography by Joel Lerner 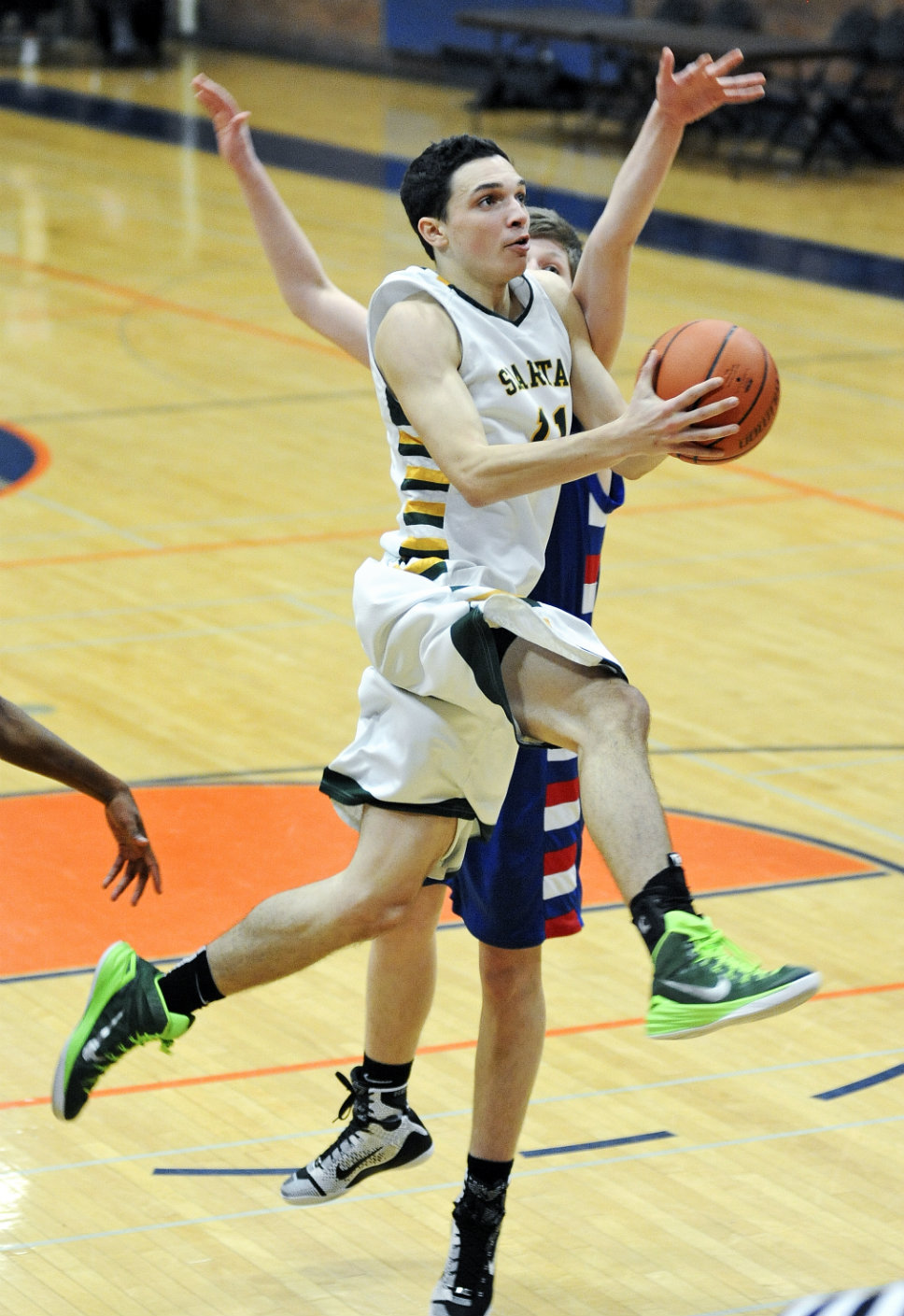 Jonathan Simon of the Spartans flies to hoop against Mather. Photography by Joel Lerner 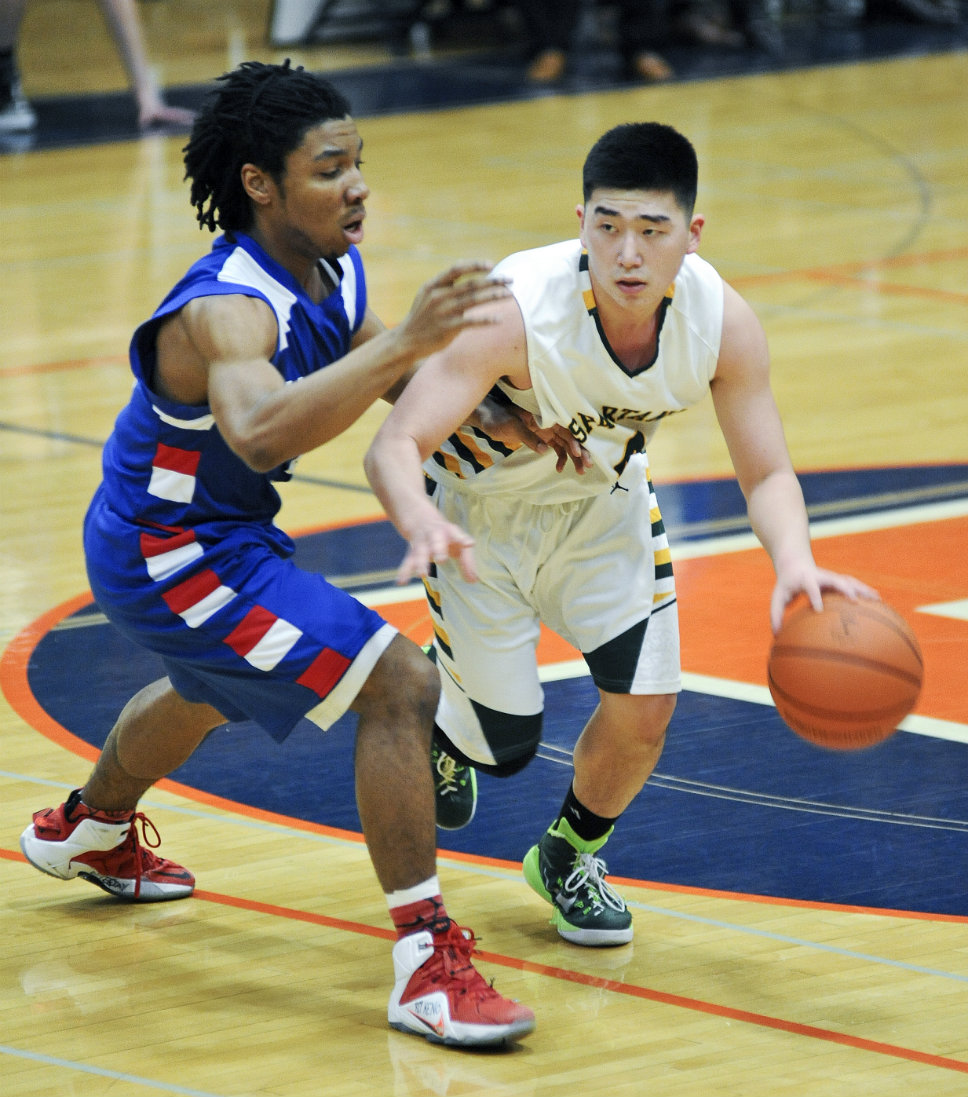 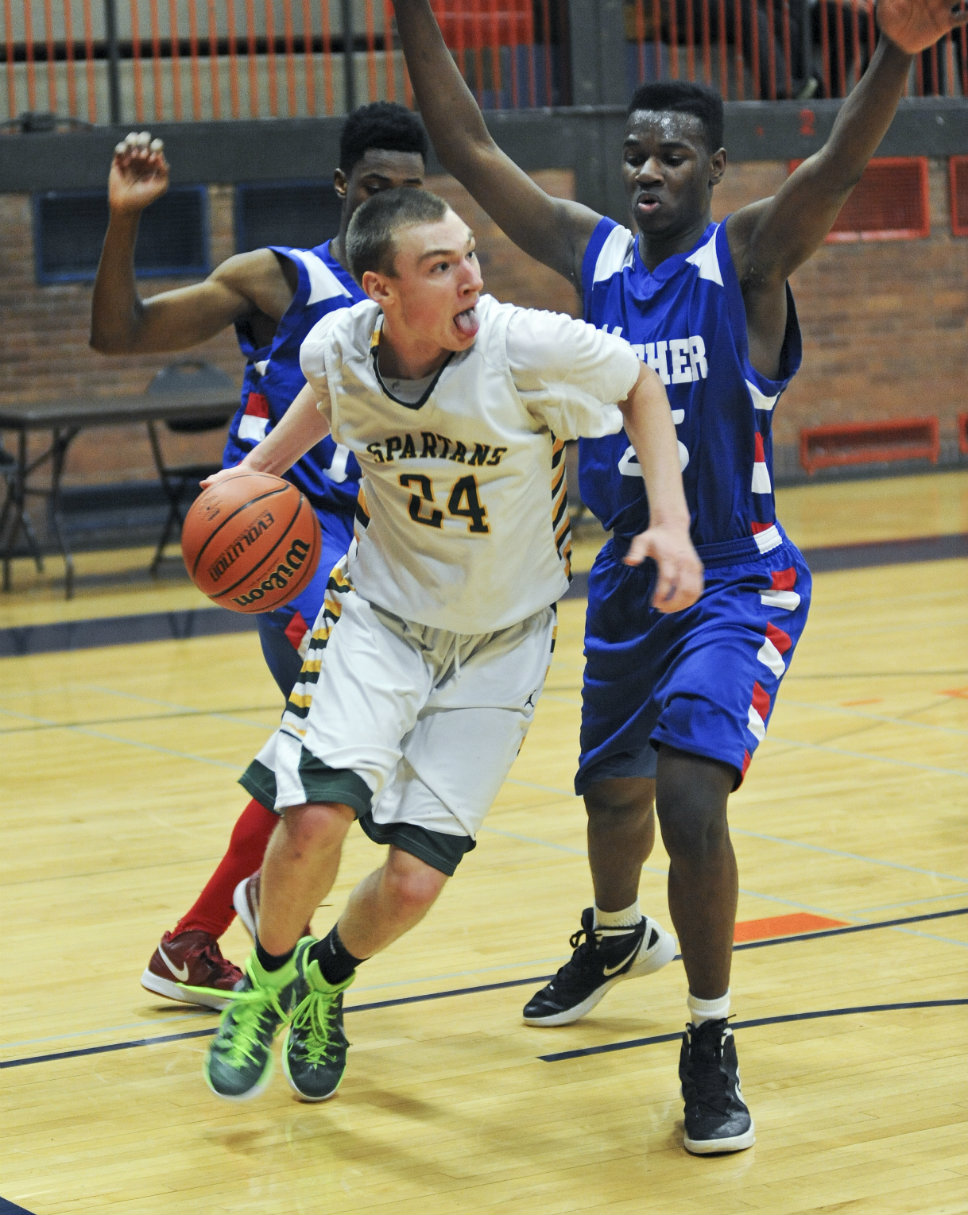 Pat Hamilton of the Spartans works the baseline against Mather in the play-in game at the Evanston Regional. Photography by Joel Lerner

Evanston Regional: In the other play-in game at Evanston, Loyola Academy claimed its fifth straight win with a 62-52 decision over Taft. 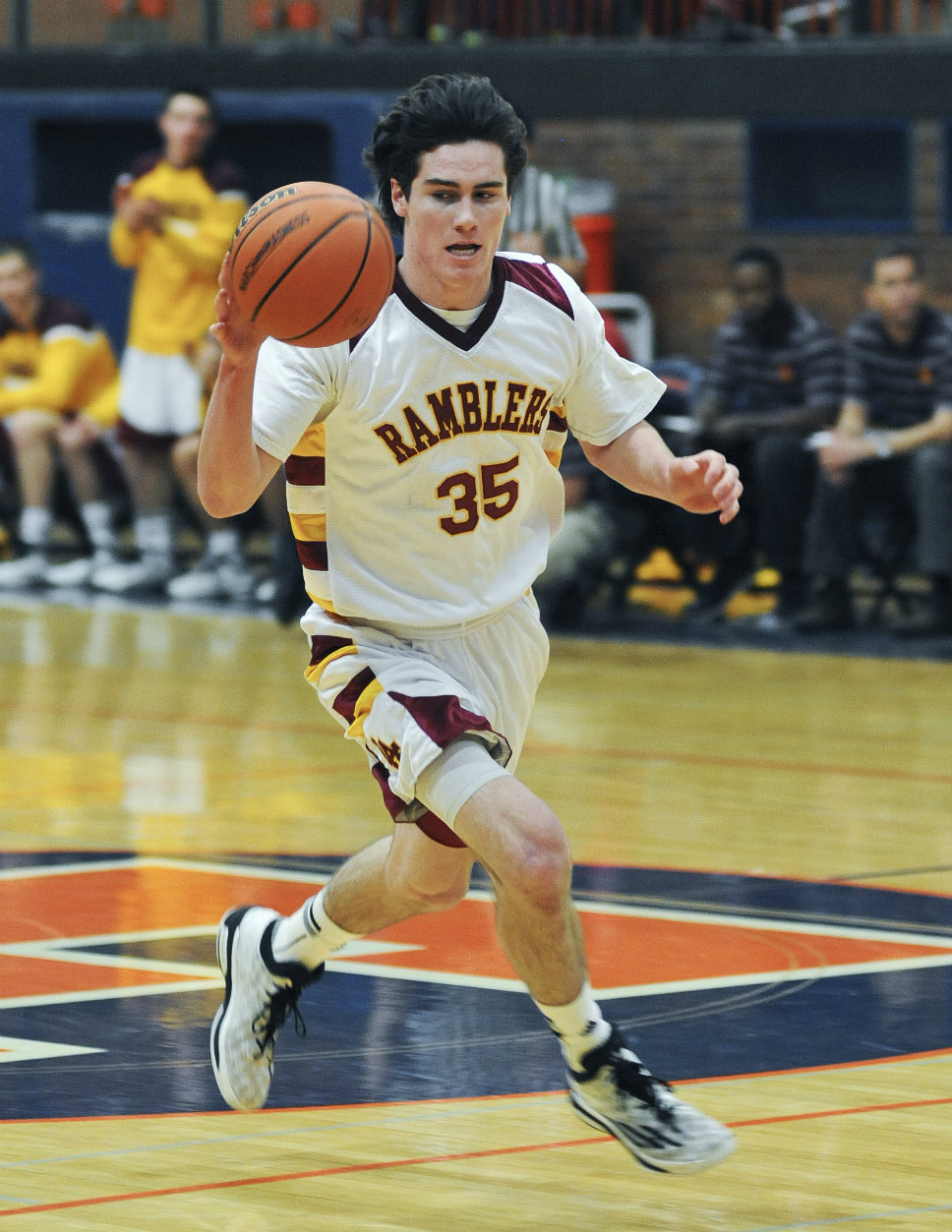 Loyola Academy’s Mark Dowdle takes possession of the basketball during a play-in game against Taft. Photography by Joel Lerner 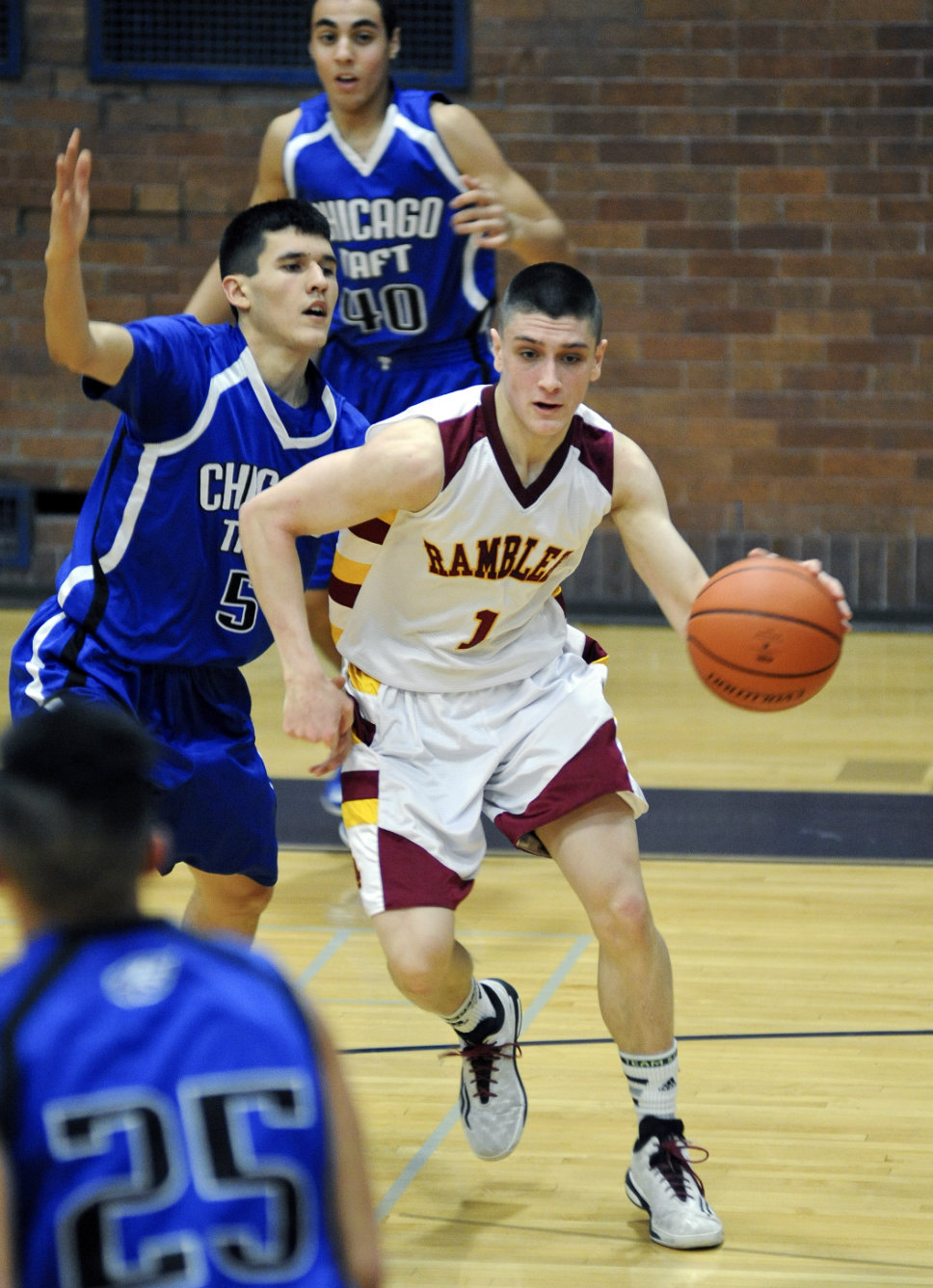 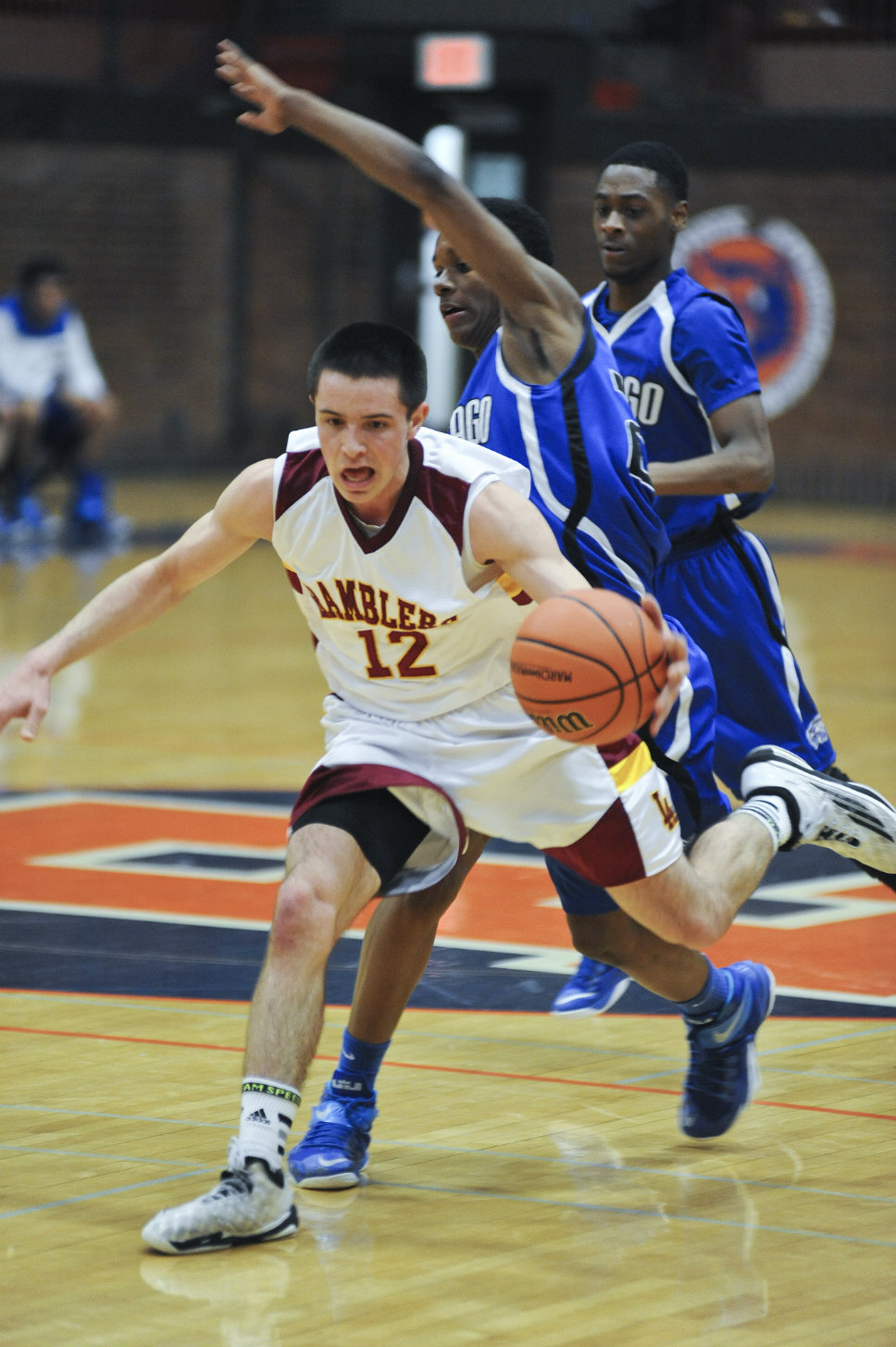 Senior Paul Cushing of the Ramblers handles the rock during Monday’s contest. Photography by Joel Lerner 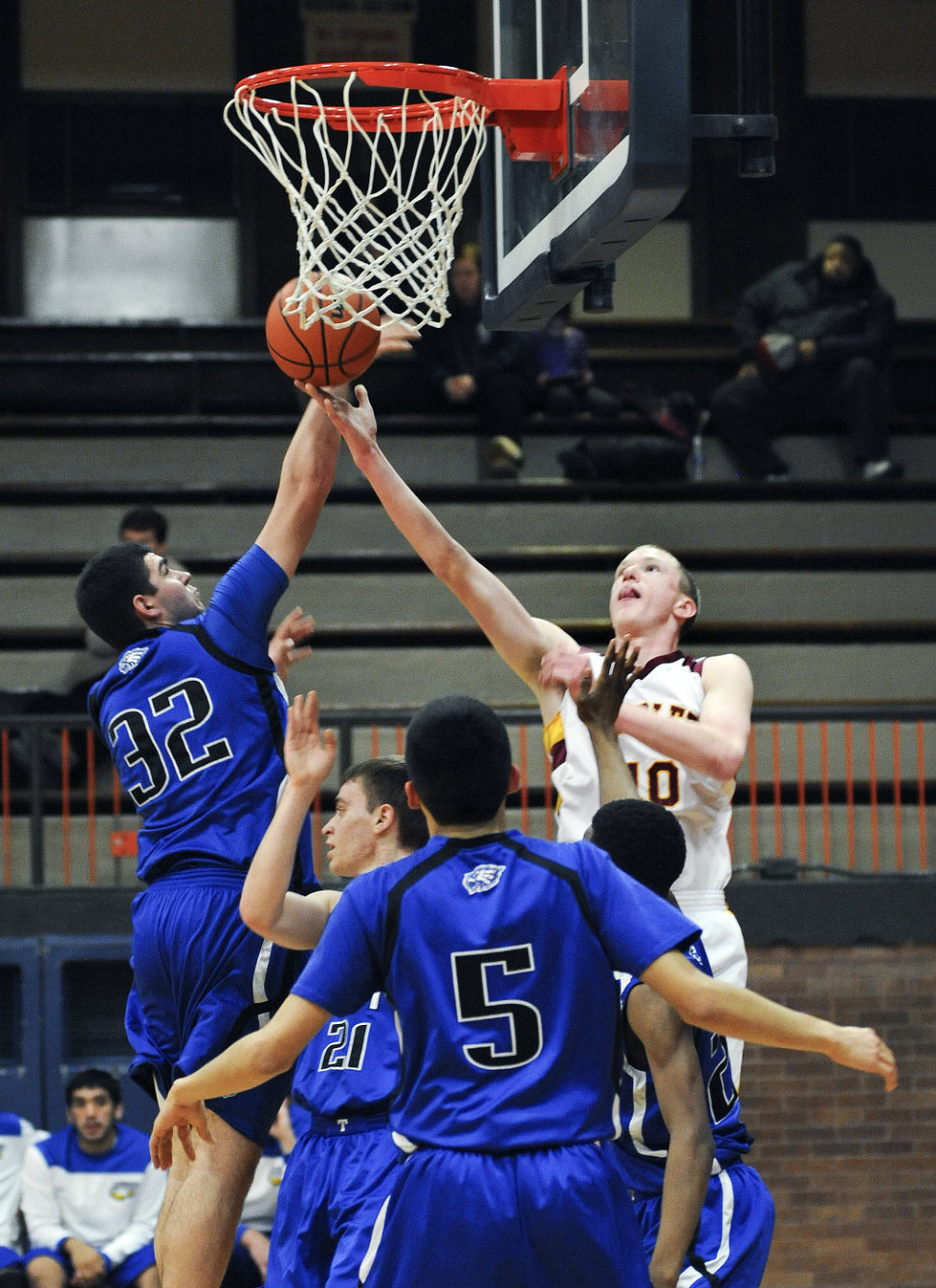 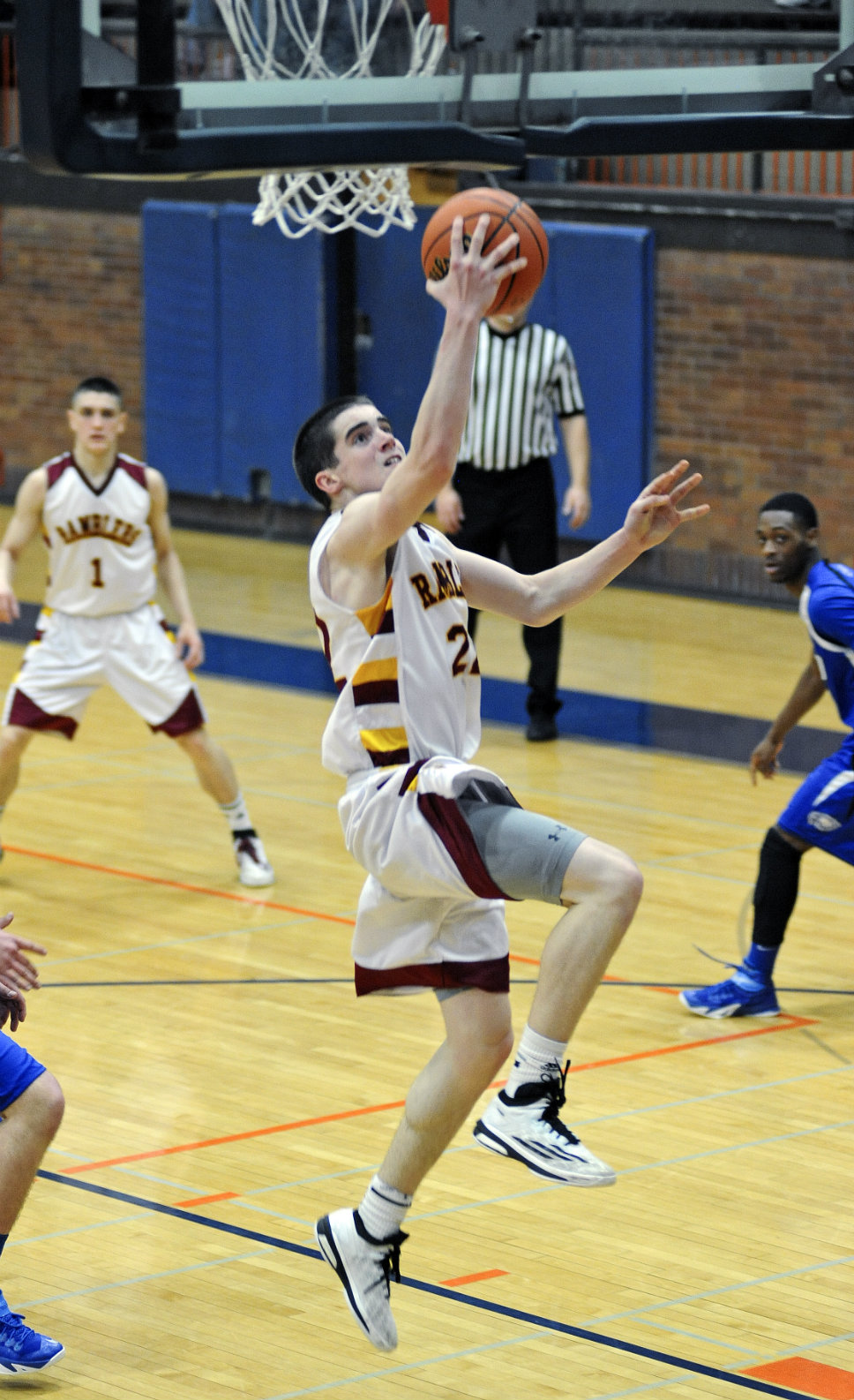 Michael Mangan of the Ramblers drives to the hoop against Taft. Photography by Joel Lerner