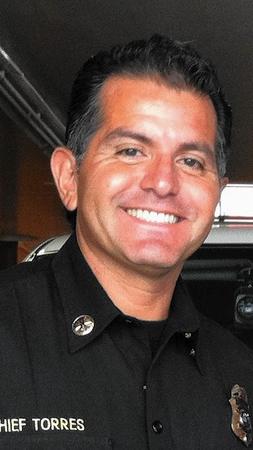 Northbrook’s New Fire Chief Jose Torres was sworn in to his post by village officials and pinned with a badge of honor by his wife, Leanna, at the Village’s Board of Trustees meeting on February 24.

Torres is a 34-year veteran of fire service and comes to Northbrook most recently from the department in Santa Monica, California.

“I’m very honored, privileged and blessed to be your fire chief,” he said. “I will do my best to serve you in this community and give 100% of what I have in my talents and skills as a fire professional. Thank you for the opportunity.”

One of the trustees joked with Torres about the town’s “hazing process” and gave him the option of telling his favorite surfing story from Venice Beach or having his wife sing the Ohio State Football fight song.

Torres played along: “I’ve traveled the world surfing, but my best session was probably in South Africa where I almost drowned. Now if that happens, I have a good team of people to pull me out of Lake Michigan.”

The other major point of business at the meeting was the much-debated special permit approval for a drive-through Dunkin Donuts facility located at 2775 Dundee Road where it intersects with Pfingsten Road. A previous meeting by the town’s plan commission asked the builder to redesign the original configuration, which now opts to demolish the old property at the site in favor of a new building that designed to alleviate on-site circulation and allow for a greater queue of cars in the drive-through line. The new renderings were largely approved by the commission.

However, the Board of Trustees had their own concerns about the proposal related to the implied traffic congestion that would further swell at the intersection, noise pollution from the drive-through speakers and the request for a 24/7 operation. One Trustee feared the property would resemble the Starbucks and Potbelly drive-through complex on Skokie Boulevard, which he said “doesn’t work well” while another was concerned that overnight hours would inspire more armed robberies such as those that two local businesses were victim to in recent weeks.

While the indecisive board was not initially keen to vote on the matter on this night, a “humble” request from the business owner to move the process forward after six months of delays apparently changed their minds.

The board unanimously voted to approve the special permit application with the provisions that the 24/7 hours of business could be restricted to 4 a.m. to 12 a.m. after a 60-day trial, that drive-through speakers be limited to use between 5:30 a.m. and 10 p.m. and that a menu board moves slightly to decrease car stacking. The village welcomed the Dunkin Donuts owner and said the spot would be “a great addition to Northbrook.”

Before concluding, new matters of business were put on the agenda for upcoming meetings, including discussions related to the burial of overhead lines, water management and a refreshed look at parking codes. The village also announced a workshop on the new state budgets to be held Tuesday, March 10 at 6:30 p.m.