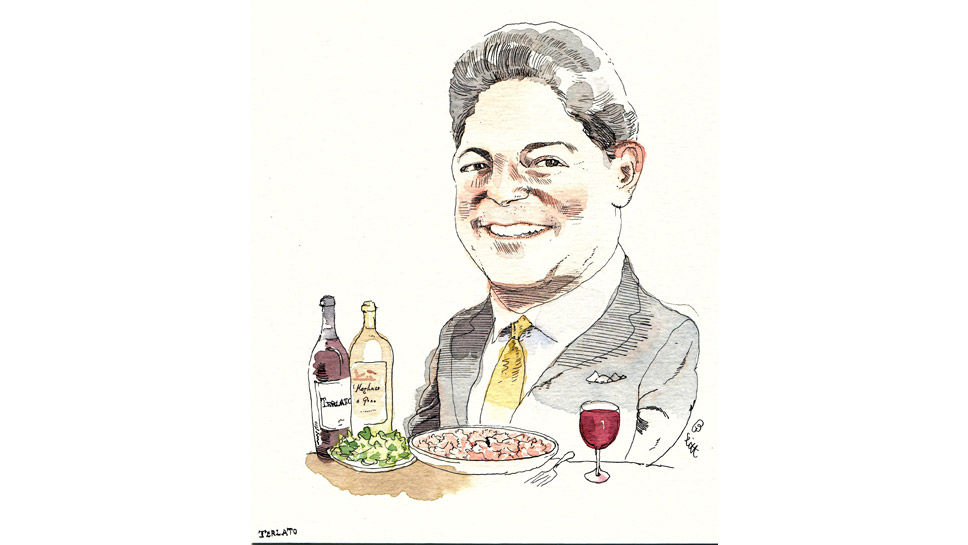 Whenever Jack Nicklaus flies into Chicago, he partakes in a ritual.

Driving an hour north to Lake Bluff, the golf legend stops at a 26,000-square-foot estate finished during the Great Depression. Once there, a large table is set. Each guest takes a seat at his or her place card. Then, as if to test the hinges, the adjoining door to the dining room endlessly swings open, revealing course after course from the kitchen.

Nicklaus has not been the only well-known person to show up for lunch. Professional golfers Ernie Els and Luke Donald have as well. Business tycoon Johann Rupert, winemaker Michel Chapoutier — the list goes on and on.

“You can’t make a reservation,” says Bill Terlato, president and CEO of his family’s eponymous wine company and private lunch table. (One exception: When he was mayor of Chicago, Richard Daley took his wife, Maggie, here each year for their anniversary after calling to make sure it was OK. “He said it was his favorite place for lunch,” notes Terlato.)

Nicklaus, Els and Donald have all launched wine brands by partnering with the Terlatos. Though I am not in that category, Terlato and I are seated at the same table. Looking every bit like a modern interpretation of the Knights of Camelot, Terlato is flanked by well-dressed business associates, coworkers, and clients, some of whom will be leaving soon on journeys around the world.

Terlato himself spends over half the year traveling to vineyards and wineries, but right now he’s indulging in the lunchtime ritual. Grilled Berkshire Pork and Saffron Farfalle have just paraded out of the kitchen. Terlato, deep in thought, masterfully decants, swirls, and sips a pinot noir.

“People always ask me, ‘What’s your favorite wine?’ And I tell them, generally speaking, it’s the one I’m currently drinking,” says Terlato. (His current preference: a 2011 Terlato Family Vineyards Pinot Noir from the Russian River Valley.) The table laughs and Terlato gives a toast, followed by a refined clink of glass.

Behind him, bottles of wine representing almost every continent cover the mantelpiece. Bottles line the table in front of us, and a cursory count has them in the hundreds — practically obscuring a side table — as if in preparation for an epic bacchanalia.

Though there are achievements galore to celebrate, such merrymaking is rare. The family’s crest — a unicorn with the beard of a Billy goat — has come to represent four generations of Terlatos in the family business. Adopted from the Armour family (the original owners of Tangley Oaks), the symbol is emblematic of the Terlatos’ hard work, determination, and sacrifice it took to be able to walk the same stone halls as those meatpacking scions.

At the end of a cul-de-sac surrounded by well-manicured lawns and a copse of barrel-chested oak trees, the Tudor Gothic castle now stands as the international headquarters of Terlato Wines. The family’s history, however, is more humble. In the beginning, there was a retail store at Clark and Ridge avenues in Chicago. With Pacific Wine Company, a local bottler of California wines, it evolved into the industry’s leading fine wine distribution company under the business acumen of Bill’s father Anthony Terlato, whose father-in-law owned the firm.

As the years went on, Bill’s father became known by another title: the “Father of Pinot Grigio.”

“Somebody has to be the pioneer,” says Terlato, “and what my Dad did for Pinot Grigio was remarkable.”

A 1980s commercial recounts the story. “Have you ever ordered a plate of pasta and 18 bottles of wine?” asks the narrator, as the scene opens on a smiling waiter taking a dapperly gentleman’s order. “I did in a restaurant in northern Italy. I’m Anthony Terlato, and I import premium Italian wines.”

In 1978, few people in the United States had ever heard of — let alone tasted — Pinot Grigio. Tony Terlato changed all that. After tasting subtle differences and notes in 18 bottles that year, his palate settled on the Santa Margherita brand, which was introduced in the United States in 1979.

“People couldn’t pronounce it,” explains Terlato. “They said, ‘Nobody is going to buy this.’ But he believed in it. He believed in the quality of the wine.”

Today, Pinot Grigio is the fastest-growing varietal, and Santa Margherita is the best-selling imported wine over $14 in U.S. history.

The sun never sets on the Terlatos’ wine empire. Winery investments and partnerships include vineyards in the Napa Valley; Victoria, Australia; the Rhone Valley in France; and Montalcino, Italy. Most recently, the company acquired 60 acres of the Juliana Vineyard, in Pope Valley, Calif. The property’s crops, planted primarily with merlot and cabernet franc grapes, are used in Terlato’s Rutherford Hill Merlot and select Rutherford Hill Bordeaux-style blends — only two of over 80 brands within their portfolio.

Like his father before him, Bill has made sure the company has become the leader in premium brands, from handcrafted spirits to the wines that have made the Terlato name synonymous with luxury wines in the United States.

“One of our greatest assets as a family is being able to understand what people are going to like before they even know it exists,” says Terlato, who along with his brother, John (vice chairman) and daughter Jo (Illinois regional manager), represent a multigenerational family business.

Currently, the Anselmi brand, from vintner Roberto Anselmi in Northern Veneto, Italy, is exploding due, in large part, to the prescience of the Terlato’s palates.

“We tasted his wines, and they were remarkable,” says Terlato.

But the afternoon’s wisest words of wisdom come at the close of our final dish. It’s then that Terlato fills the lunch party in on a little secret. There’s only one way to truly distinguish a great wine, he notes. Whether you’re sitting with Jack Nicklaus, Michael Jordan, or the Queen of England, “a great wine is when you’re out to dinner with friends or family, and you’re wondering how to get more wine in your glass than everyone else.”

The table laughs, nodding in agreement and exchanging stories. Looking over the bottles on the table, it’s easy to note the obvious. For its part, Terlato’s wine glass is decidedly, unabashedly full.