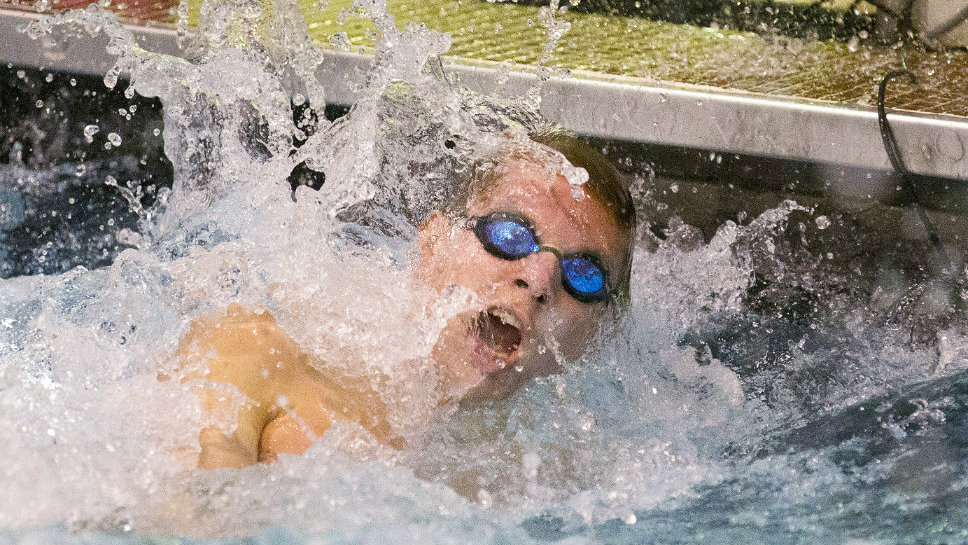 Alex Grant, a senior, did not qualify for state in his two events at a sectional swimming meet last weekend. Tough news, heartbreaking news. The New Trier sprinter/breaststroker would seemingly have to turn in his suit and goggles and wonder what if — “What if I had shaved and tapered for the sectional?” — for months, maybe years.

But Grant was downright upbeat after taking third in each of the 50-yard freestyle (life-time best 22.4) and 100 breaststroke (1:00.9) races at the Glenbrook North Sectional on Feb. 21. His season did not end in Northbrook. He would not have to wonder. He would get to serve as a relay member for at least two of NT’s three relays at this weekend’s state meet in the home water, even though he did not compete in any of the relays at the sectional.

“We’re taking a gamble,” Trevians coach Josh Runkle, minutes before the start of the sectional, said of opting not to rest Grant, a relay regular all season, in the week leading up to the sectional.

Grant understood the gamble. Runkle had explained it to Grant more than a month ago.

“It could pay off in the long run,” Grant said after his final race at the sectional.

It certainly could. A shaved and fully rested Grant will likely serve as the anchor of New Trier’s 200 medley relay, a unit (freshman Charlie Scheinfeld and seniors Drew Keenan, Murphy McQuet and Tomo Sharpee) that clocked a pool-record 1:34.98 at last weekend’s sectional. Look for Grant to also line up as a member of NT’s 200 free quartet at state.

“I love competing,” said the 6-foot-3, 170-pound Grant, the leading scorer on last year’s NT water polo team. “I’m looking forward [to the week before state]. Everybody will be smiling in practice. We’ll have more energy. We’ll be motivated, really motivated, to swim fast and do well at state.”

New Trier’s boat of participants will be crowded at state. The Trevians qualified 18 entries, including divers George Owen (9th, 404.15 points) and Drew Parkinson (10th, 403.3). NTHS captured the sectional title with a 287-point effort, well ahead of runner-up Glenbrook North (181.5).

At this time last year, Grant’s junior season had ended. His “state meet” was the Central Suburban League South Meet, where he hit the water as a fully tapered relay leg.

“It’s exciting to see a guy move up the ranks like Alex has,” NT assistant coach Mac Guy said at last weekend’s sectional. “He takes his leadership roles [on the swim and water polo teams] seriously. He has developed as a sprinter, as a breaststroker. I remember seeing him go 49 [seconds] in the 100 [free] early this season. I remember thinking, ‘Oh, he’s ready, and he’s here to compete.’ ”

Just ask Ramblers sophomore Daniel McGowan. Shortly after qualifying for state in the 500 free at the Glenbrook North Sectional, he mentioned his teammate and lap counter, Nathaniel Guenther. He then praised Guenther.

“I knew I had to hold 28.6s (50-yard splits),” said McGowan, whose third-place 4:46.21 was more than 11 seconds faster than his seed time in the event. “Nathaniel did a good job. He was keeping track of how I was doing, and before my 11th lap, he started shaking [the submerged counter] pretty quickly.”

That’s swim code for, “Pick up the pace.”

McGowan followed the order and secured one of LA’s five state-qualifying berths.

As a freshman last winter, McGowan never broke 5:00 in the distance event. He is well under that now, well on his way to melting more time.

“I swam every day last summer,” said McGowan, a fixture in the offseason at the Leaning Tower YMCA in Niles.

LA junior Christopher Kearney qualified for state in the 200 free (second place, 1:42.5) and 100 free (second, 46.81). His time in the 200 free ranks seventh among all state qualifiers in the event. Loyola divers Christopher Canning (second, 523.15 points) and Ryan Nash (third, 495.4) also advanced. Only six other divers in the state amassed more points at sectionals than Canning did.