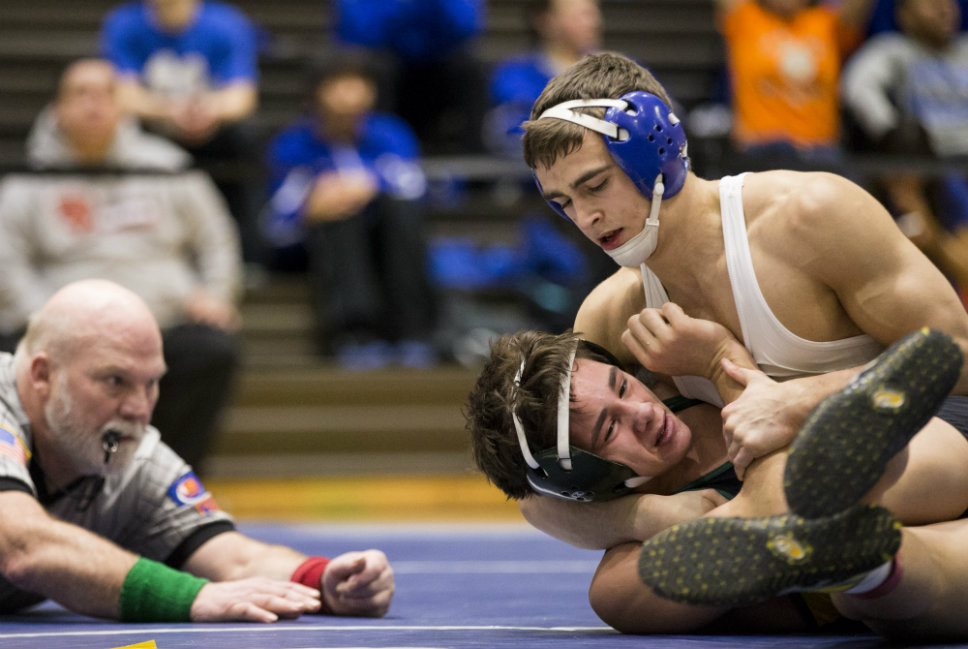 Alec McKenna of the Trevians, seen here pinning his man at the Glenbrook South Regional, claimed runner-up honors at 132 at the state meet. Photography by Ting Shen

They went at each other often at the end of wrestling practices, New Trier High School senior teammates Alec McKenna and Luke Iida. McKenna grappled in the 132-pound class, Iida in the 138-pound division. Good friends. Competitive wrestling partners, hyper-competitive partners … in a takedown drill.

McKenna took shot after shot. So did Iida. Finishing a shot was the quest. Finishing a shot was difficult. A typical McKenna-vs.-Iida drill went on and on and on, exhausting the pair, making one minute feel like a week at times, like a month at other times. It was must-see action in the Trevians’ wrestling room.

One nearly won a state championship last weekend in Champaign. Northwestern-bound McKenna finished runner-up to St. Rita sophomore Austin O’Connor (45-1) in the Class 3A title bout at 132 pounds on Feb. 21. O’Connor, the 3A reigning state champ at 106 pounds, solved McKenna 14-6.

“He stuck to his strategy, wrestled very well,” said the 5-foot-7 McKenna, a state quarterfinalist (at 126 pounds) a year ago. “I wasn’t in a good position to do what I wanted to do. I wanted him to tie me up; I work better from that position. He took shots after creating space.”

McKenna ended his stellar senior year with a 43-2 record, a program mark for victories in a season. His only other loss was a 1-0 decision to Montini junior Dylan Duncan, the Class 2A state champ at 132 pounds.

McKenna will also graduate as the program’s leader in career wins (137). His appearance in a state final last weekend was the first by a New Trier matman since Rick Bickert, a New Trier East product, captured the title at 185 pounds in 1975.

“Stay offensive … that’s what I worked on all season,” McKenna said. “I focused on getting out from the bottom, staying in good position and setting up my shots well.”

“First 10 seconds of the second period, I got out from the bottom,” McKenna said. “That helped me. He’s good, very good good, on top. He rode me last year.”

McKenna then defeated Marmion Academy’s AJ Jaffe 8-3 in a state semifinal on Feb. 20. A four-point sequence, capped by a cradle at the end of the first period, buoyed the Trevian. Momentum was his, for good. He rode it. He reached a final at State Farm Center, home of the Illini.

The result meant McKenna would get to march in with Tadelman. They turn down most of the lights in the arena during the Grand March. A spotlight hits each wrestler, each accompanying coach. Goosebumps appear. Goosebumps linger.

“It was an honor to be with him during that march,” said Tadelman, McKenna’s coach for seven years, including three at the youth level. “Alec had a great season, a great career. I am proud of him. He was always looking to get better, technique-wise and strength-wise.”

McKenna and his father, Bill, headed north after the championship finals, arriving home on Feb. 22, at around 12:45 a.m. They discussed Alec’s prep career. They looked ahead. The son plans to take a little time off and freestyle wrestle in the summer. Then it’s off to Evanston, for the start of a Big Ten career.

“It didn’t end the way I wanted it to end,” Alec McKenna said of his career in a New Trier singlet. “But this season … Coach Tadelman had a huge impact. He kept pushing me, kept believing in me. He and his assistants were fully invested. They all were great. Luke Iida, he had a huge impact, too. Tough kid, good friend.”

Iida was a hockey player until he ceased playing the sport in the sixth grade. He wanted to battle in a sport, any sport, in the winter of his seventh grade. McKenna proposed wrestling.

Iida gave it a shot.

Only one other wrestler from New Trier qualified for state this year. It was none other than Iida. McKenna’s wrestling partner finished with a 30-12 record at 138 pounds.

“We did a lot of conditioning together before state,” Iida said. “The way we helped each other in wrestling, as friends — that meant a lot.

“Alec,” he added, “did a really good job of moving this year, of staying offensive in his matches. He took a lot of shots, and he never let up.”