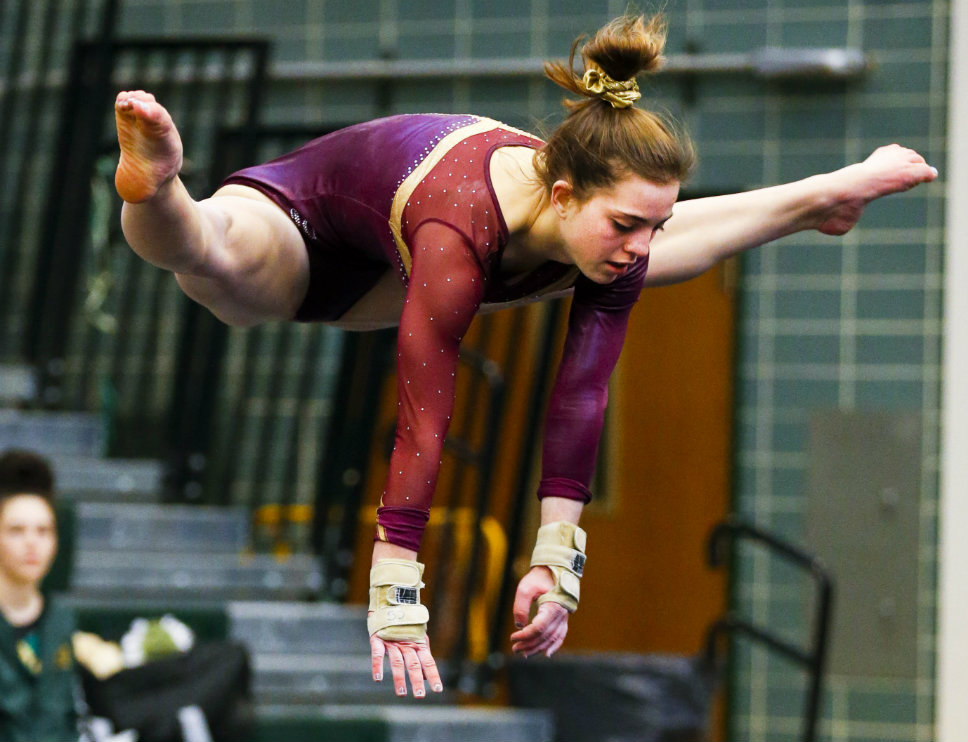 Loyola Academy’s Claire Sullivan competed in the all-around at the state meet. Photography by Joel Lerner

It made Claire Sullivan laugh last weekend. It also eased the Loyola Academy junior’s nerves at a tense gymnastics meet.

Many of Sullivan’s supporters, at least 20, showed up wearing maroon-and-gold T-shirts at the state meet at Palatine High School. Maroon and gold are LA’s school colors. Those fans, though, attend New Trier High School. They competed for the school’s gymnastics program in the 2014-15 season. Many have trained at Wilmette Gymnastics, where the likable Sullivan, a Wilmette resident, hones her skills as a club gymnast.

NTHS is home of the Trevians, home of the blue, green and gray Trevians. It is half of the intense New Trier-Loyola sports rivalry.

Has a group of Yankees, wearing Red Sox colors, ever attended a World Series involving the Red Sox? Has a Hatfield ever rooted for a McCoy?

“That was awesome and completely unexpected, seeing them and what they were wearing,” said Sullivan, the lone Rambler in LA’s gymnastics program since her sophomore year. “That was sweet of them.”

NT senior gymnast Sara Hummel came up with the T-shirt idea. Printed on the back of each shirt : THERE’S NO ‘I’ IN TEAM UNLESS YOUR NAME IS CLAIRE SULLIVAN.

Claire Sullivan was clad in a maroon leotard — and a wide smile — after performing a 9.25 routine on the balance beam in the state preliminary session on Feb. 20. It ranked sixth among the 34 qualifiers in the event. It landed her a berth in the finals session on Feb. 21.

A fall on her difficult beam dismount (aerial back-tuck full) marred an otherwise clean show on the second day of the state meet.

Her daughter ended up in 10th place, with an 8.925, a year after qualifying for state (all-around, beam, floor exercise) but not for the championship finals.

Shortly after her championship finals routine last weekend, Sullivan’s vocal contingent in the bleachers shouted, “We love you, Claire!”

Claire Sullivan had felt good about her dismount in midair. Felt confident. She was all poised to stick her landing and earn a healthy score north of 9.0.

“I didn’t expect the ground to come so soon,” a smiling Sullivan said. “I guess I was a little crooked coming off the aerial.”

Sullivan also finished 22nd in the all-around (36.05) and 32nd on the uneven bars (8.475) last weekend. During the floor exercise finals, she stood near a set of bleaches, reflecting. Her two days at state were festive, full of memories. Loud and pro-Claire Sullivan, too, especially from a certain section of bleachers at the other end of Palatine High School’s main gym.

“It was a cool experience,” she said. “[The second day] was a completely different atmosphere. What an awesome experience, getting to be with all these great gymnasts.”

Notable: Sullivan attempted to become Loyola Academy’s second state medalist (top five in an event or in the all-around) in girls gymnastics for a second straight winter last weekend. She missed the achievement by 0.35 on beam. Former Rambler Jenny White finished fourth on vault (9.625) at the 1999 state meet.