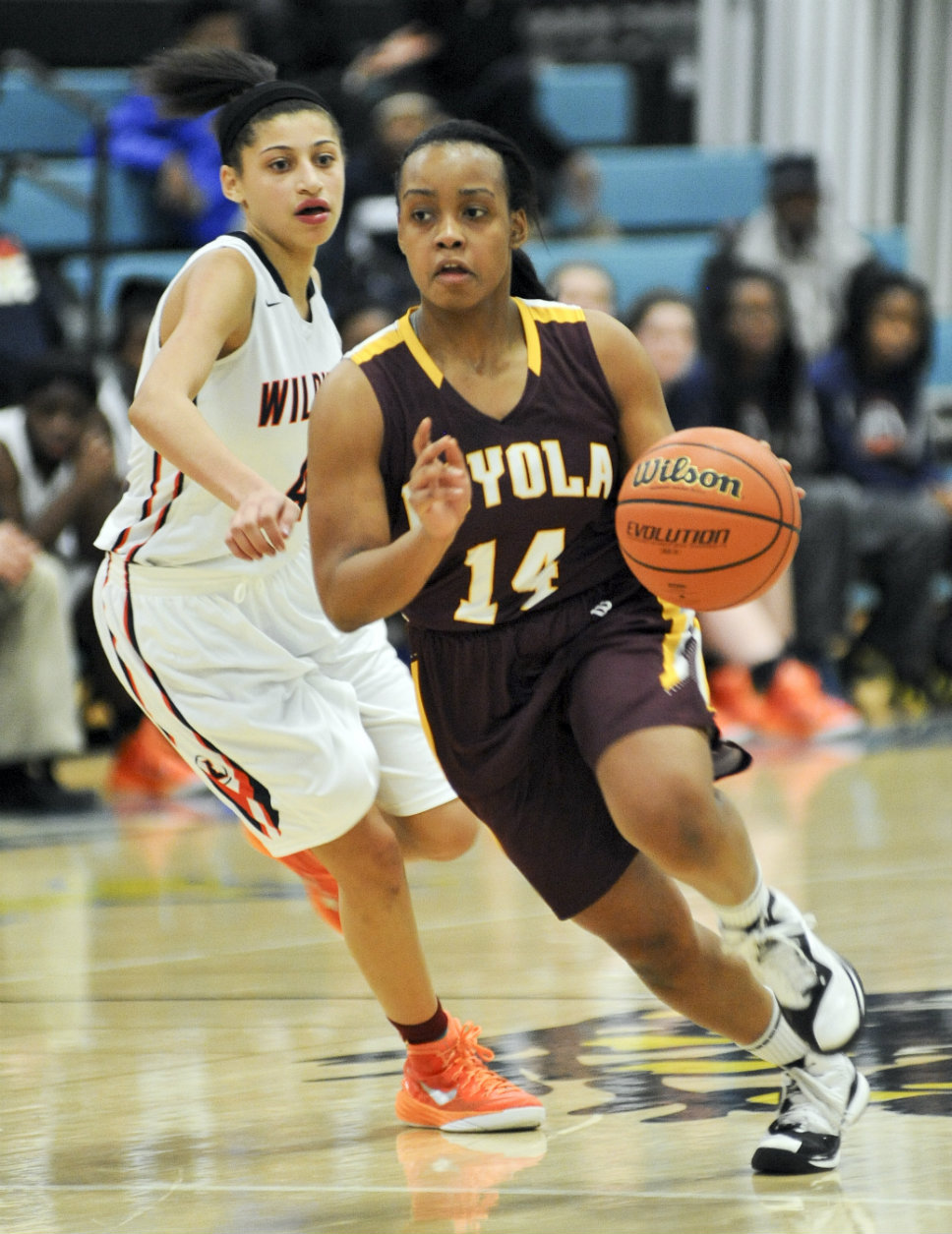 Loyola Academy’s Tyra Mills beats an Evanston defender off the dribble during the sectional semifinal at Maine West. Photography by George Pfoertner

Usually, Tyra Mills is content with playing to her strengths.

The Loyola Academy senior excels on the defensive end, and her ball-handling — especially against the press — is top-notch.

But on Feb. 19, in the title game of the Class 4A Maine West Regional, there was a paradigm shift in Mills’ game.

The 5-foot-5 point guard stepped out of her comfort zone and went on the offensive in LA’s 47-41 heartbreaking overtime loss to Evanston.

Having a sense of urgency worked in her favor

“A regional title game was on the line,” said Mills. “You’ve got to make something happen.”

Mills used an array of shots, including two threes, to tally a team-best 18 points.

“I knew she had it in her,” said Loyola head coach Jeremy Schoenecker. “I know that she’s a very unselfish player, but I wish we could have seen more of this from her all year.”

Mills was put on the spot at the end of the game.

With 6.1 seconds left in regulation, she went to the foul line for two shots, looking to give the Ramblers (17-12) a three-point advantage.

“She’s the one we wanted at the line in that situation,” said Schoenecker, who watched Mills go 10-for-10 at the foul line in a game against Trinity in January. “She’s the reason we stayed in the game.”

Mills got the first one — the tough one — to fall.

“I was skeptical,” said Mills, an 82.4 percent shooter from the free-throw line this season. “I really didn’t think the first one was going in. It didn’t feel right.”

And the second one?

“It went a little too far to the right,” she said.

Her real disbelief came 6.1 seconds later. That’s when Evanston standout Leighah-Amori Wool dribbled the length of the floor and banked in a 10-foot shot.

“I credit Wool for making the tough shot,” said Schoenecker, who watched his team get outscored 12-6 in the overtime period. “But we can’t let her go coast to coast like that.

“We were 6.1 seconds away from winning a regional title,” he added.

Heading into the Glenbrook South Sectional final, which was scheduled to be played on Feb. 26 against Evanston, the Trevians had yet to be challenged in the playoff run.
In three Class 4A tournament games, including a 60-40 decision over Maine South in a sectional semifinal game at Glenbrook South on Feb. 23, they had outscored their opponents 183-75.
There were no surprises in the Maine South game.
“The kids just went out and executed,” said NT head coach Teri Rodgers.
In fact, during a five-minute stretch in the second quarter, the Trevians’ execution was close to perfection. They converted points on eight of nine possessions to break open a tight game.
Five different players scored points during the barrage, while 18 of the 22 points came on long-range missiles from Haley Greer (2), Jackie Welch (2), Kathryn Pedi and Autumn Kalis.
Junior center Jeannie Boehm, who has been named the CSL South Player of the Year, didn’t knock down any threes during that stretch, but she did score two baskets, including a 10-footer at the buzzer.
“All year, we’ve prided ourselves on having a balanced scoring attack,” said Rodgers.
That certainly was the case against the Hawks (18-18). Three players ended up in double digits: Boehm (19), Greer (17) and Welch (10). Pedi had seven points, while Kalis added five points.
The Trevians, as expected, completely dominated play in the Niles West Sectional. In the title game on Feb. 19, they had four players in double figures — Boehm (16), Greer (10), Kalis (10) and Pedi (10) — in a 65-29 win over Taft.

Two days earlier, NT topped Mather 58-6 in a regional semifinal. Boehm had 17 points.
In addition to Boehm, NT’s other all-conference selections include Greer, Pedi and Welch.

Maeve Degnan put on a show in Regina’s 51-38 victory over Johnsburg in the Class 3A regional title game at Elmwood Park on Feb. 19.
The senior standout went 7-for-10 from beyond the three-point arc to finish with a game-high 27 points. She also had seven steals in the contest.
The Panthers (18-11), who were scheduled to play host Sequoits in the semifinal round of the Antioch Sectional on Feb. 24, also received solid efforts from the Palmer sisters in their win over Johnsburg. Sophomore Colleen Palmer came up with 12 points and five rebounds, while senior Maggie Palmer, who advanced in the three-point shooting contest, had six points and five rebounds.
Regina had very little trouble against Amundsen in the regional opener on Feb. 18. Degnan (13 points) and Maggie Palmer (12 points) led the way.

The Giants, who finished the season 4-23, had one player earn all-CSL North honors this winter: Grace Quirk.
The senior, who will play college soccer at the University of Wisconsin, averaged 11 points, 10 rebounds and two steals per game.