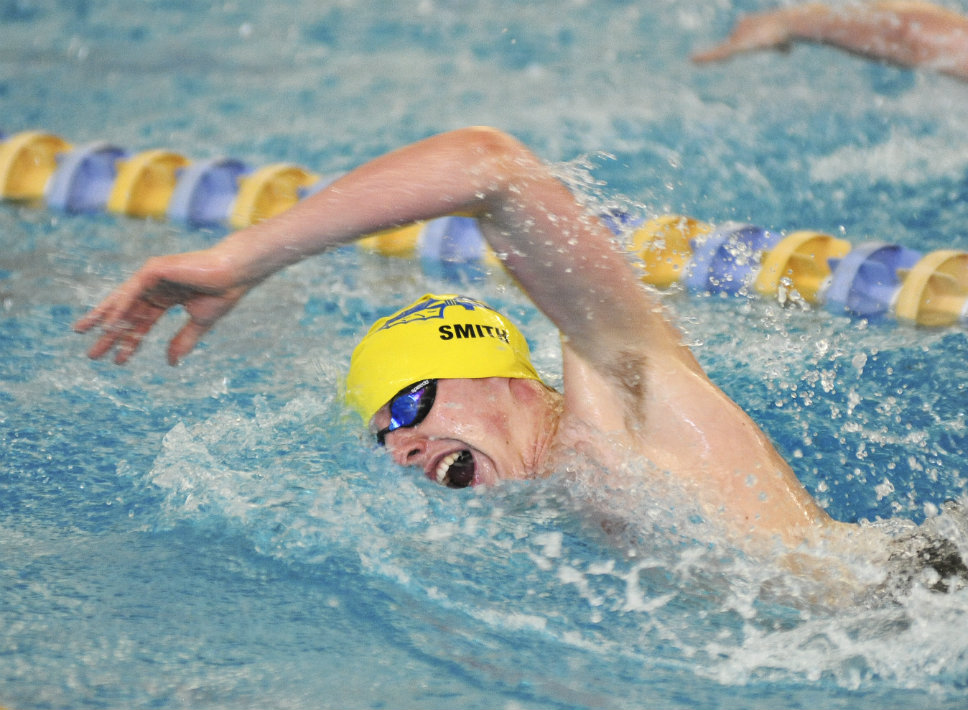 It was like a night at the Oscars for Cindy Dell.

Minus the red carpet.

On the eve of the 87th Academy Awards, the Lake Forest High School swim coach was one of the master presenters at the Vernon Hills Sectional on Feb. 21.

The Scouts won seven of 12 events, which meant Dell had the duty of doling out individual medals seven times.

Winning has its perks.

“She was up and down like a yo-yo,” said Scouts senior Daniel Smith.

Once again, it was the Fab Four — swimmers Dylan Boyd, Michael LeMay, Symen Ooms and Daniel Smith — and the Dynamic Duo — divers John-Michael Diveris and Alex Streightiff — which carried the day for the Scouts, who were awarded the first-place plaque by outscoring Libertyville 276-226.

“We know … next Saturday (state finals at New Trier on Feb. 27-28) is what it’s all about,” said Dell. “Today was about making a statement.”

Ooms truly was “ooutstanding”. He gets the Best Performance award for going home with four first-place medals.

“He (Ooms) was pretty incredible at the end,” said Smith, who was part of that relay along with Boyd and LeMay. “He’s such a great racer. He hates to lose, which is a really good trait to have when you’re an anchor.”

And beating a tough swimmer like Grayslake North star Brendon Bolman (47.14), who came in as the favorite, made it even better for Ooms.

Lane 4 also wasn’t safe in the 200 free. Boyd proved that when he blasted to a 1:39.42 clocking, which allowed him to beat Libertyville standout and event favorite, Matt Harrington (1:40.06).

And, along the way, Boyd broke a pool record, which was owned by former LFHS star Mitch Stoehr (1:40.22).

The 200 medley relay was another showcase event for the Scouts. Smith (backstroke), Ooms (breaststroke), LeMay (butterfly) and Boyd (freestyle) blew by everyone in a time of 1:36.83.

“The medley relay plays to our strengths,” said Ooms. “Daniel is known for his backstroke, and he was phenomenal. Michael looked good in the fly, and Dylan killed it the freestyle. It was a nice collaboration.”

Streightiff and Diveris continue to ascend in diving competition. They set the tone for an LF team victory, when they went 1-2 in the morning diving session. Streightiff registered a lofty 534.80 total, which shattered the pool record (470.80). Diveris claimed runner-up honors with a 473.30.

Highlighted by the first-place performances of junior Allen Tran and sophomore Levy Nathan, the Giants tallied 181 points to finish fourth at the VH Sectional.

“He improved his time, even though he went out a little conservatively,” said HP head coach Tim Sirois.

“Levy got after it,” said Sirois. “That was nice to see.”

“He missed it by a hair,” Sirois said.

HP’s other near miss came in the 200 medley relay. The foursome of Tran, Nathan, Hugh Laedlein and Eddie Kochman recorded a third-place time of 1:38.0. They needed a 1:37.95 to qualify.

It was Kochman’s last hurrah.

“Eddie has been a great leader for us,” said Sirois. “He’s a true team player, who is always concerned about his teammates. I’m real proud of the way he carries himself.”

This also was Sam Dotson’s final high school meet. The senior finished fifth in the 100 breast in 1:02.52.