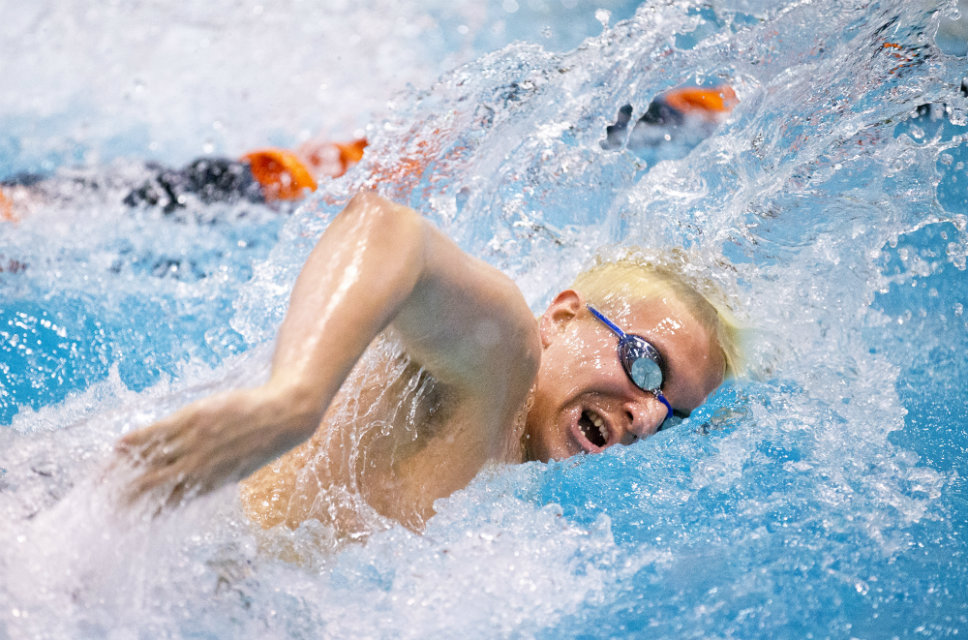 Glenbrook South junior Sam Salganik’s most important swims this season likely were against Jon Salomon, who, incidentally, is Salganik’s teammate.
In recent years, the University of Wisconsin-bound Salomon appeared to be swimming on a whole different level than Salganik.
Then, during the team’s winter break training trip to Iowa City, Salganik found himself not only closing the gap on Salomon, but in some cases keeping pace. Suddenly, Salganik’s confidence began to soar.
“Coach Mac (Keith McDonald) had been saying he knew I had the skill to go faster and that I just had to push myself harder,” Salganik said. “I tried that during the Iowa trip and felt like I have been swimming really well since then.”
Salganik continued: “Once you know you can keep up with Jon during sets, it really boosts your confidence because he’s one of the top swimmers in the state. I was staying with him during 100 freestyle sets and realized Jon was not as (difficult to swim against).”
McDonald said Salganik’s talent had never been in doubt, but that the swimmer sometimes needed a little boost in motivation, perhaps due to a lack of belief in himself.
Much of that has changed in the last few months.
“It’s my third year coaching (Salganik), and in the past he was very awed by Jon Salomon. Sam never gave himself enough credit in practice,” McDonald said. “But he’s been challenging Jon, and it’s been exciting to see that transformation. It’s paid off. He’s gained a lot of confidence and has gotten faster.”
With Titan standouts like Salomon and sophomore Sam Iida expected to shine at this weekend’s state meet at New Trier, performances by swimmers like Salganik will be crucial to Glenbrook South’s hopes of earning the school’s first top-three finish since 2009.
The Titans came in fifth at last season’s state meet. Like in 2014, Salganik is scheduled to swim the 100 butterfly and all three relays this weekend. Though a talented performer in the 200 free, Salganik had little hesitation when asked to forego that race in favor of swimming the third leg (fly) in the meet-opening 200 medley relay.
“Coach said the team needed me in the medley,” he said “In the end, it matters what’s best for the team and what can get the team a better chance of winning a trophy.”
The Titans (284 points) finished second to Evanston (302.5) at the Glenbrook South Sectional on Feb. 21. But McDonald said the Titans’ goals for the meet were mostly about getting swims through to state and still having room to improve this week.
Glenbrook South did win eight of 12 events. Iida was tops in the 200 IM (1:54.02) and 500 free (4:35.21). He has the best sectional 500 time in the state.
Salomon won the 50 free (20.83) and 100 free (46.60), and enters state with the third-best sectional time in the 50 and eighth-best in the 100.
Anchoring the 400 free relay, Salomon came from two body lengths behind to out-touch Evanston’s fourth leg. The Titans’ 400 free team, which also includes Iida, Salganik and senior Paul Salay, recorded the fourth-best sectional time in the state (3:09.88).

Notable: Glenbrook South senior Aaron Ach won diving (590.75), earning the second-best sectional score in the state. Salganik captured the top spot in 100 fly (52.69), while junior Byron Mandell was victorious in the 100 breaststroke (1.0014).
McDonald said the Titans are part of a small group of teams capable of securing a trophy, with New Trier, Hinsdale Central, Metea Valley and Naperville Central the other elite squads.
Salganik said the Titans have been on a mission to earn a top-three trophy, something the program did for three straight years from 2007-09.
“We’re in the running for a top-three trophy, and it would be a big deal because it hasn’t happened in a while,” he said. “That’s been our goal all year.”