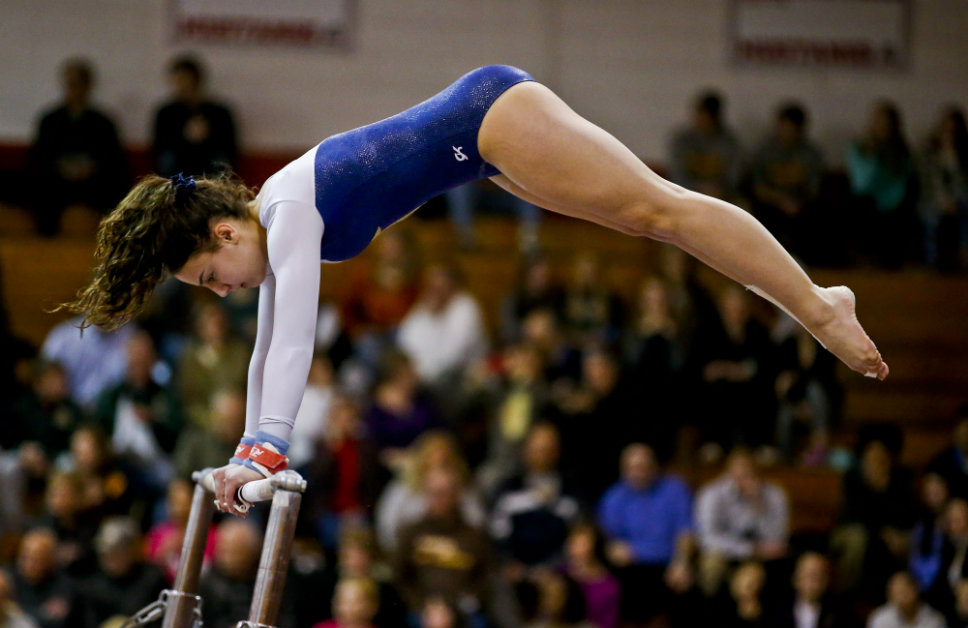 The Glenbrook South High School Titan could not work on her balance beam, floor exercise and vault routines.

“After working on bars for 30 minutes, sometimes 45 minutes, Hannah would hang out near the equipment at practice,” Glenbrook South coach Steve Gale recalled at last weekend’s state meet at Palatine High School. “She’d hang out, watch her teammates. She’d also give her teammates advice. It got to the point where I called her ‘Coach Hannah.’ There were times when I found myself saying, ‘Thanks, Coach Hannah.’ ”

Those times made the 5-foot-2 Hannah Hartley smile. Those times did not accelerate the healing process. Hartley, a club member of Dreams Gymnastics in Glenview, first felt pain in her right ankle near Halloween, about a month before the start of the season. An x-ray found nothing. An MRI discovered a stress reaction.

“Some days I’d wake up, and the ankle felt fine,” says Hartley, the Titans’ top all-arounder and a state qualifier last winter. “But it would start hurting again at school. Resting is always horrible when you love to compete like I do. Gymnastics … it’s a big part of my life. It has been for a while [13 years, including seven as a competitive gymnast]. I had to be mentally tough, push through the pain, stay positive.”

She got the OK to compete on bars, beam and floor at the Central Suburban League South Meet on the home mats Jan. 30. She begged for the OK to sprint and launch herself as a vaulter. Coach Gale denied “Coach Hannah.”

“Hannah,” Gale said, “probably would’ve nailed her vault that night. The safe move was not to let her do it.”

Hartley’s teammate, sophomore Kaci Castino, won the vault segment at the meet. Hartley? All she did was win bars (9.375). And beam (9.525). And floor (9.5). On a taped-up, barking right ankle. Three days later she made her season debut as an all-arounder, at a regional meet at Glenbrook South. Hartley won the all-around (37.55) and three events, including vault (9.55). A week after that, at the Mundelein Sectional, the gimpy and gritty Hartley qualified for state as an all-arounder, vaulter and floor competitor.

“Hannah is here [at the state meet, Feb. 20-21] because of her inner drive,” said Gale, whose Titans placed eighth (140.625 points) in the program’s first team appearance at state since the 2000-01 season. “To do what she did, to get the scores she got, when hurting — that proves how talented she is. That spoke volumes for her talent. It makes you think, ‘Oh, to be able to see her compete on two healthy ankles.’ How great would that have been? Teammates saw her pushing through, saw her doing what she could do for the team. They knew she was hurting. They saw her ice her ankle after practices, after meets.

“Hannah,” he added, “motivated her teammates whenever she competed.”

Twelve gymnasts advanced to the championship finals on vault at state last weekend. One of them was Hartley. The vault event is never kind to ankles, healthy ones included. Hartley qualified for the finals session with a 9.525. She ended up 10th (9.425).

“Hannah has a great attitude,” Castino said. “She’s upbeat about the sport, loves the sport. After my routines, she’s always happy and always smiling.

“I first met her at tryouts last year. She owned those tryouts. I was in awe.”

Hartley was in need of an outlet as a child. She bounced around the house at a young age, a kid with a surplus of energy. Ted and Marci Hartley signed their daughter up for gymnastics lessons. Their daughter was six. Their house soon became a second gym — without mats.

“I’d do handstands around the house,” Hartley recalled. “I’d walk that way in the kitchen, in any room, in the hallways. I probably came close to breaking things. I even tried walking up a stairway that way. I climbed one or two steps.”

Two Glenbrook South gymnasts, Hartley and Castino, are in the same Food II class at the school. It is their last class of the day. The pair got into a fun flour fight one day. One threw flour at the other. The other retaliated. Maybe they staged a rematch in gymnastics practice, chalk replacing flour as the weapon of gentle destruction.

“It’s fun being around her,” Castino said. “She’s such a unique person and a great friend, always there for you.”

Notable: Glenbrook South freshman Bebe Haramaras also advanced to an event final at state last weekend, taking eighth on beam (9.075) on Feb. 21. She was the lone freshman to survive the previous day’s preliminaries, a tidbit her mother, Sue, knew. The daughter did not know the tidbit until her mother shared it on the morning of the championship finals. “When I woke up [on Feb. 21], I was still so surprised, so excited about getting to compete again,” said Haramaras, a level-9 gymnast at The Gymnastic Shop, a club based in Mount Prospect. “My approach was to relax, have fun. I tried to treat it like it’s any other meet. Being at state, it was such an honor.” … Sophomores Julia Stadler and Katie Wahl and freshman Kylie Kruger also competed at state for Glenbrook South last weekend. Wahl tied for 25th place on vault (9.375), ahead of Stadler (27th, 9.35).