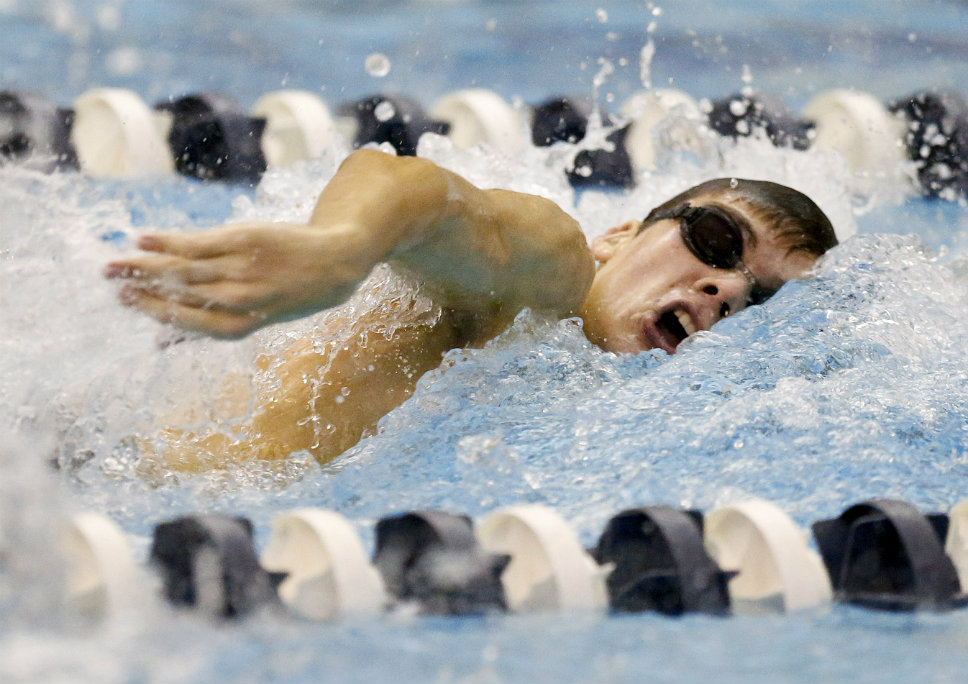 He races for Glenbrook North High School’s swimming team. He lifeguards and teaches swimming at the North Suburban YMCA in Northbrook. He trains with the Glenview Titans Aquatic Club. He knows — must know — that about 71 percent of the earth’s surface is water-covered.

Where there is water, there is usually Mark Schneider.

“Swimming?” the junior said after last weekend’s sectional meet in the home water. “This sport has made me tough. I don’t give up, if it’s in a race, if it’s a school thing, if it’s a personal thing. It’s internal with me, swimming. I always want to race. I hate losing.

“Our coach [Kirk Ziemke, the Spartans’ first-year water boss] tells us swimming is going to help us when have a tough test in college, when we’re in a job interview, when we have to face any kind of challenge.”

“Big, strong kid, a competitor,” Ziemke said of Schneider, a state qualifier on two relays (with 2014 graduates Victor Qiao, Jack Brierton and Patrick Gosciminski) last winter. “He’s a big force for us. He has developed his athleticism since last year. Only a junior, with a lot of talent.”

Max Schneider is six years old, with a big brother named Mark. The two spend time in the pool at the Y, Mark Schneider’s place of business. They splish. They splash. Max also plays soccer and executes gymnastics moves. Mark spends times watching Max play dryland sports. The brothers use sports to bond, to laugh together, to create memories.

“It gives me great enjoyment, being around him,” Mark says.

The same could be said about Mark Schneider, who sports a race face during meets and a friendly face during school days.

“Mark is super funny, a good dude,” said senior Abigail Rosenberg, among the best females to ever swim for Glenbrook North and another Glenview Titans Aquatic Club member. “He’s a good teammate … on a team that got hit hard [by graduation [’14]. He gets the boys revved up. His turnover [rate] has improved; his streamlines, too.

“In school,” she adds, “he’s fun and respectful, always a good addition to a group.”

Schneider and his teammates finished an impressive second (181.5 points) to New Trier (287) at last weekend’s 13-team sectional. The Spartans advanced six entries to this weekend’s state meet and received top-six efforts from five other entries. Glenbrook North junior Brendon Johnson sped to an astonishing time drop in the 200 IM, clocking a runner-up and state-qualifying 1:55.8 from an outside lane. The time sits atop Glenbrook North’s all-time 200 IM list. Johnson had entered the race with a seed time of 2:02, nearly four seconds slower than the state-qualifying standard in the event. The result turned Ziemke into an ecstatic, fist-pumping coach on deck. He roared after the swimmers in the final 200 IM heat stopped swimming. He raised his arms, hands still clenched. His joy was pure.

“Our team had an amazing day,” Schneider said. “Coming into this year, with a new coach, a bunch of juniors and a couple of underclassmen … and we lost three very good seniors. Look at what we did. Awesome. We had an awesome meet.”

Josh Khazanov, Glenbrook North senior swimmer, saw what Schneider did on Feb. 21. It made him think of Seattle Seahawks running back Marshawn Lynch. It conjured up a certain fairy tale character, the one who played opposite a beauty.

“Mark,” Khazanov said, “swam like a beast today. He brings so much positive energy. His work ethic is unbelievable. He’s a great teammate. He absolutely loves swimming.