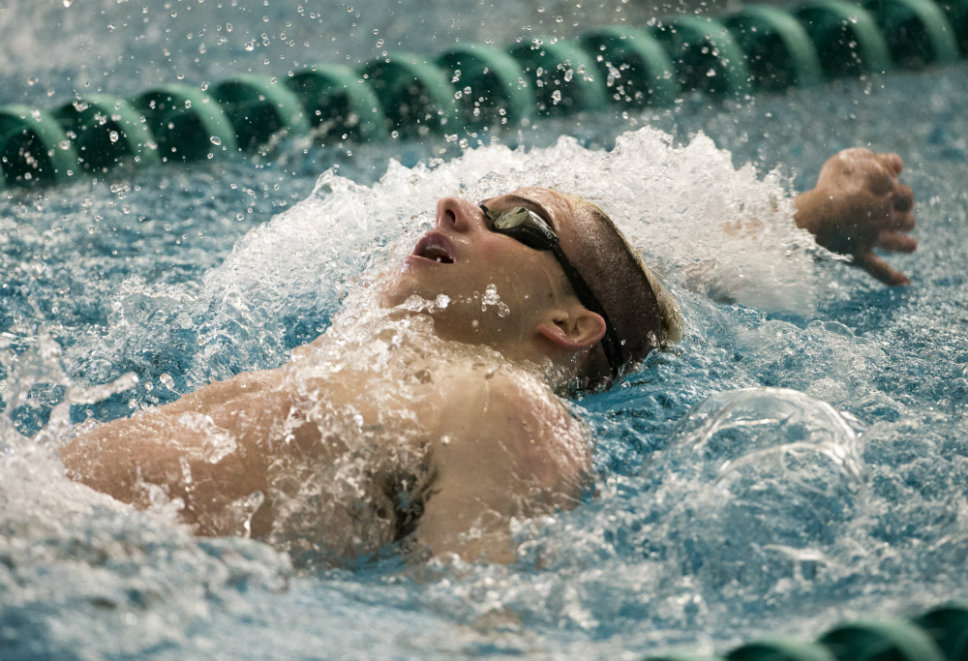 One of the first fists Smith bumped, after the 100 fly, belonged to a Northbrook policeman, sitting behind the starting blocks. You know you must be doing something right when you receive a congratulatory gesture from a cop. Moments later, one of Smith’s good friends and COHO club teammates, Loyola Academy junior Christopher Kearney, extended his hand. Smith shook it.

“Ryan loves big meets, understands what’s at stake at big meets,” Warriors coach John Sullivan said. “He knows the competition. He knows what he has to do. By the time the end of a season rolls around, he’s a bulldog, a pit bull. He’s dynamite in a small package. Nobody intimidates him at big meets. His attitude, his approach, is, ‘Bring it on; let’s go … I’m coming after you.’ He is aggressive underwater. He attacks his turns.”

He appreciates his teammates. He is proud of them, year in and year out. Smith lauded Stern, Fischoff and Scanlan for their roles in the 200 medley relay at the sectional. The foursome lopped more than five seconds off its seed time to qualify for state.

“I live for the big moments and the stressful atmosphere at big meets,” Smith said. “I remember saying to my COHO coaches, ‘I’m ready to do my state-meet kick today.’ They got mad at me, wondering why I hadn’t used that kick earlier.”

They did not stay mad at Smith for long. It is hard to be upset with success, consistent success. One of Smith’s COHO coaches is Jacob Weber, also an assistant swim coach at DHS.

“The big stage … Ryan loves it as a swimmer,” said Weber, who has worked with Smith since Smith was eight. “Has loved it for years. He does not have overconfidence; Ryan just doesn’t worry too much at big meets. He has a positive attitude. He just … races.”

What is particularly potent about Smith, the swimmer, is a combination: his racing mentality, his underwaters. Call it his 1-2 … kick.