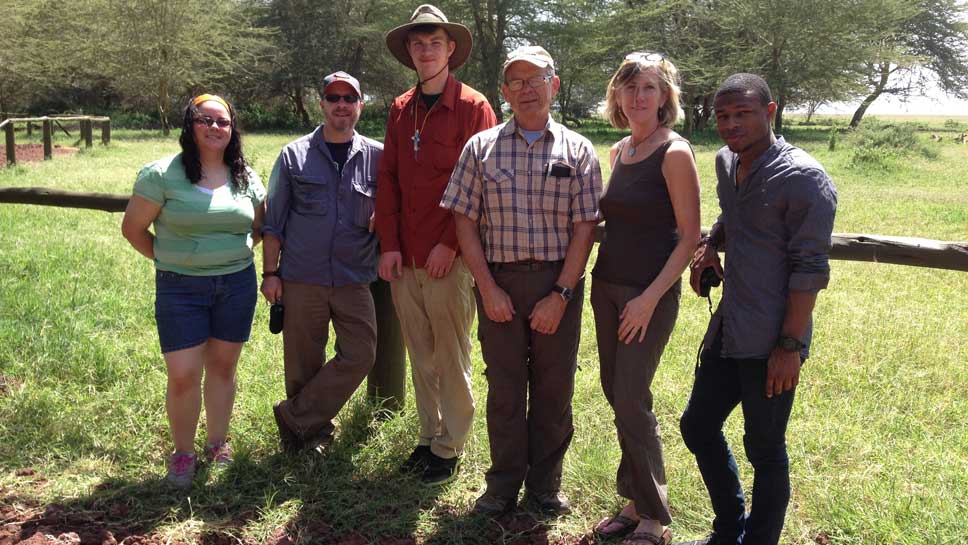 Meg Barnhart had done plenty of overseas trips and adventure travel. Nothing quite prepared her for a recently-completed trip to Africa.

Meg and her son, Douglas, were part of a group from First Presbyterian Church of Lake Forest that went to Tanzania to visit the Faraja Primary School, which the church visits each year. This is one of the few educational institutions exclusively for students with physical disabilities in an East African nation of nearly 50 million people.

The afflictions range from Spina Bifida and dwarfism to no limbs and polio. Many are in wheelchairs or need crutches or walkers for mobility, but the energy, joy, and curiosity shown by the students quickly engulfs visitors on the campus.

Saying she was “profoundly affected” by the experience, Meg added: “I went to Africa with an open heart and open mind, so I didn’t have a ‘to do’ list or a set of expectations. Having said that, I was surprised by how moved I was by the Faraja school.” Back at home in Lake Forest resident, Meg runs the Zen of Slow Cooking business. 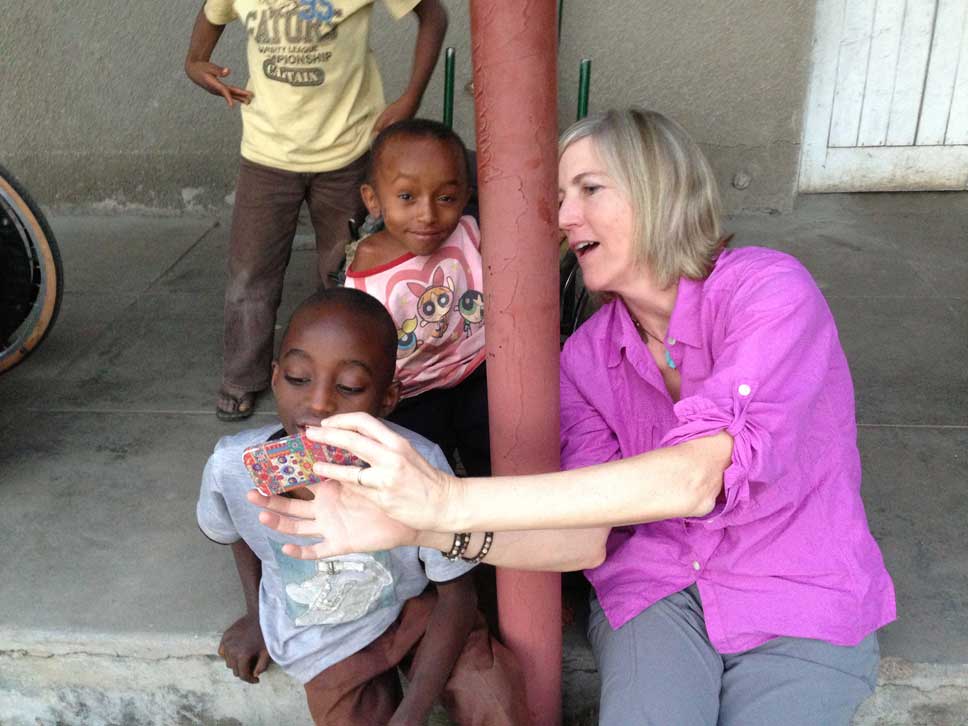 Faraja is a remote, residential institution with 85 students, mostly from primitive homes, and offers an accredited primary school (K-8) education. The programs support each graduate through additional education or vocational training to return to their community and hopefully lead a productive, self-sufficient life.

The school was started a little over 10 years ago by Joanne and Don Tolmie after his retirement as a railroad executive in Virginia. Their son, Dave, a member of the First Presbyterian Church in Lake Forest, now leads the Faraja Foundation with the help of wife Tracy and other family members.
The school receives financial aid from individuals and grants, and First Presbyterian Church’s mission committee, administered by the Rev. Corey Nelson, provides strong support. Several North Shore residents, including the pastor, serve on the Faraja Foundation’s board.

Faraja is in a rural setting an hour from Moshi, largest city in the immediate area, on roads mostly impassable in rainy season. Mt. Kilimanjaro, tallest peak on the African continent, looms in the background. 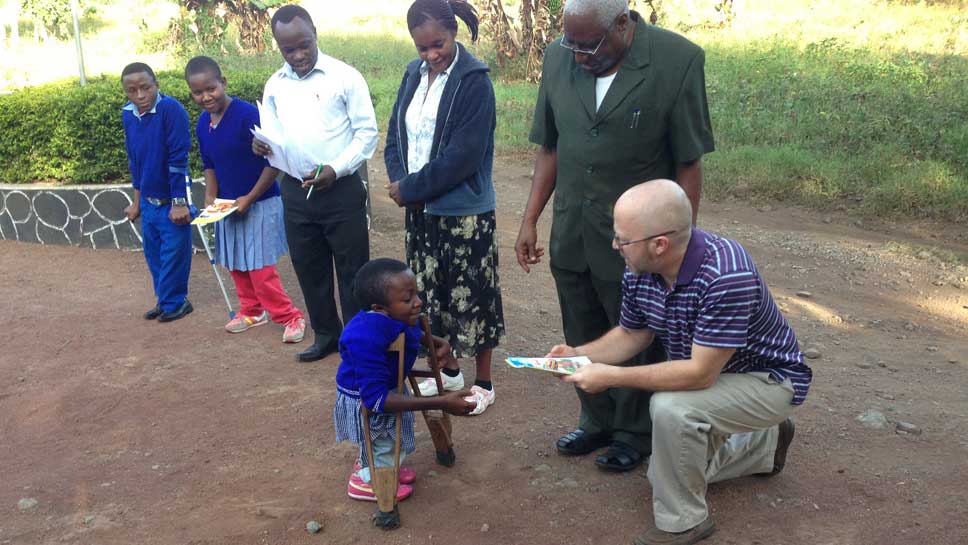 Rev. Corey Nelson accepts an official welcome on behalf of his Lake Forest group during Faraja School’s morning assembly. This was the fourth trip made by members of the First Presbyterian Church.

The school is part of the local Lutheran diocese in Tanzania, but in reality this is an ecumenical effort. Students and staff have a variety of religious backgrounds, including some from Maasai tribes with indigenous beliefs. Visitors often stay in a nearby Catholic conference center.

In its short history, Faraja has scored some excellent successes. Graduates consistently score high in national testing, finishing first overall a year ago among more than 40 district schools. Some grads have been placed in Tanzania’s best, private secondary schools.

The older alums are beginning to emerge significantly in the workforce. Two current students, Joseph Mungure and Corneli Paul, finished among the top five placers in the wheelchair division in last year’s annual Mt. Kilimanjaro Marathon despite lacking training facilities or coaching.

“The joy that radiated from the Faraja children despite the complexity of their physical challenges was amazing,” said Meg.” I was surprised by how moved I was with by school and how dedicated the people were in making a difference.” 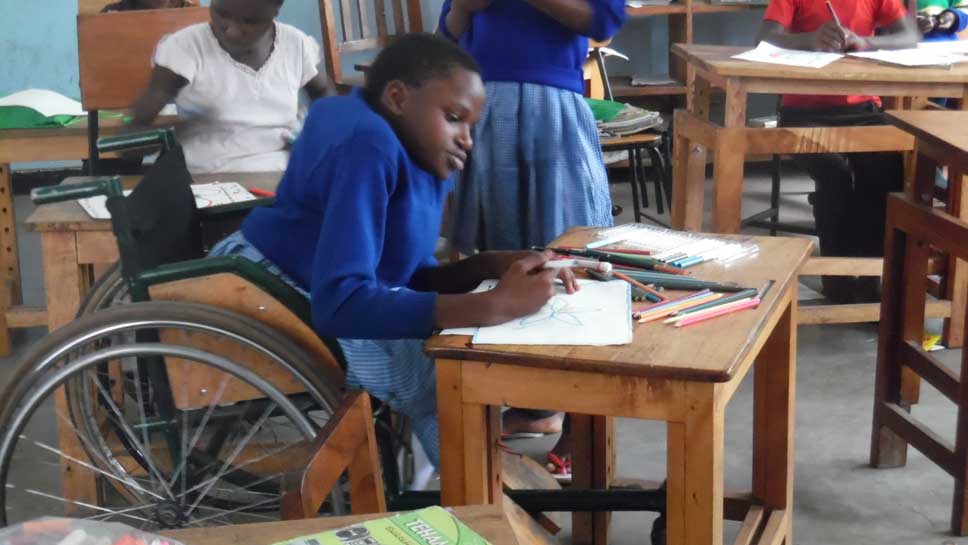 Students are eager, quick learners in the classrooms.

In addition to the school, the group visited two area hospitals, Machame Lutheran Hospital and Kilimanjaro Christian Medical Center, in and near Moshi. They provide specialized care for students that otherwise would be unavailable to them. 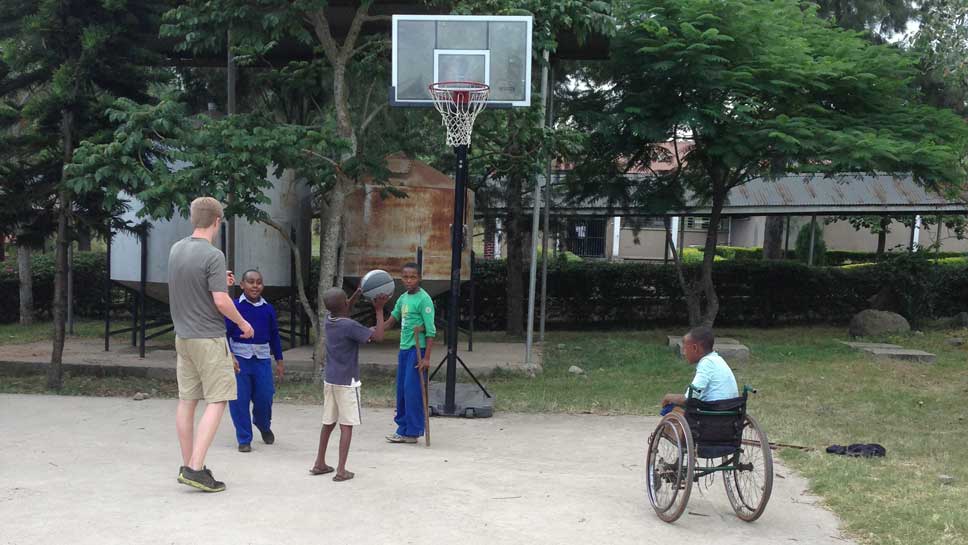 Doug Barnhart gives some basketball tips to students. The hoops were collected in Lake Forest and shipped to the school.

“I believe this is the beginning of a new journey for me and a country that I intend to visit again,” said Meg.

Next Story: A poignant side trip.

For more information on the Faraja School, visit any of these links: 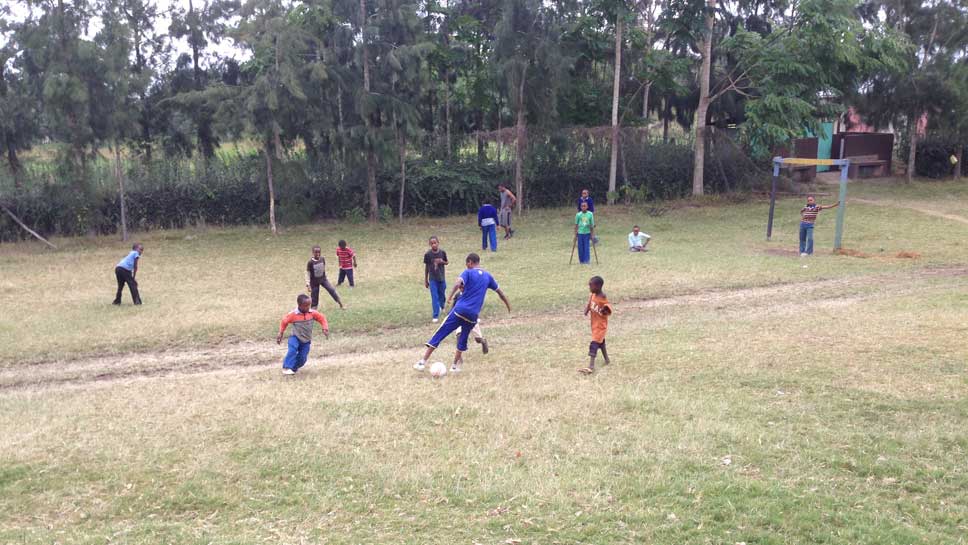 Soccer is big among Faraja students, no matter what their physical capabilities. Here in an informal game, a player puts on a move against an opponent.