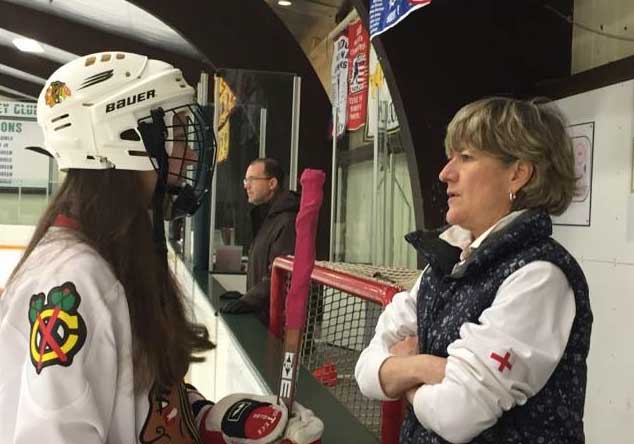 Alone in the middle of the skating rink, she experienced an epiphany: Executing the perfect double axel jump or flying camel spin was only half of the equation to success.

“It hit me that you really have to understand where your head is,” said Christie Southern, a former nationally ranked figure skater from the tender age of nine. “At that level, all skaters are good. I knew it wasn’t only my athleticism. What makes a person excel is mental toughness. The other muscle that matters is your mind.”

That realization fueled her drive to follow a path to integrate physical and mental training. “My greatest passion in life is combining Eastern and Western philosophies about fitness for both body and mind,” she said.

A native Winnetkan, Christie has owned the eponymous Christie’s Integrative Fitness in town for the past 20 years. Through personal training, group exercise, and a corporate fitness practice, she brings decades of research and experience to her unique approach.

Long before the lotus position and the sound of “Om” was commonplace, Christie was guiding clients to practice meditation. “For me, it’s not about hard bodies,” she said. “It’s about the whole person, so for 30 years meditation has been an important segment of all my fitness classes. I tell my clients to practice the art of being focused despite everything that distracts you. All of the wisdom of the East comes to bear in getting athletes into the right mindset.”

The ultimate test of her philosophy came when she coached Placido Domingo as he prepared for his starring role in Franco Zeferrelli’s film production of Otello.

“In that role he needed to look like he was carrying the burdens of the world on his shoulders,” she said. “At the time, I was working with people on integrating mind and body strength into performance. We had to get him feeling physically strong in order to play a character of such strength.”

Christie smiles when she recalls coaching the legendary opera star. “The thing I remember the most was his breathing,” she said. “I’d ask him to exhale and he would breathe out a tremendous breath that would go on forever.”

Beyond meditation, the former competitive skater has brought other cutting-edge maneuvers to Chicago. “In the late 80s, I made numerous trips to the Ashram training facility in California to study the fundamentals of strength training,” Christie said. At the time she owned Christie’s, The City Spa on Oak Street downtown. “My center became the first to teach women in Chicago to work with free weights to build strength.” What is commonplace now was novel back then. “Women said to me, ‘If I pick up a one-pound weight, won’t I bulk up?’” Christie remembered.

These days, Christie described her training as being truly integrative. “In one class, there is everything from top to toe,” she said. “Pilates, yoga, weight training, and cardio. I integrate all these different disciplines into one class.”

With a new certification as a Mental Game Performance Coach and her certification by the American College of Sports Medicine, Christie is returning to her roots while looking forward. “By going back to my days as a competitive skater, I want to help athletes maximize their performance,” she said. “Through a variety of techniques including visualization and meditation, we can help athletes to consistently perform in the upper range of their talent and skills – regardless of competitive circumstances.”

Looking into her telescope to the future, Christie sees another big wave of change. “We are now embarking on a renaissance of the mind that is similar to the fitness renaissance that took place 30 years ago,” she said. “Health clubs weren’t on the map back then, and today they are everywhere. Thanks to what neuroscientists are now beginning to discover, people understand the very tangible benefits and importance of training their minds. I believe mental strength training is the next big thing.”