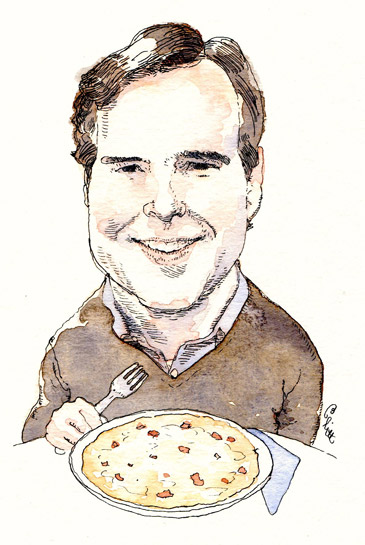 In the video, which is actually a vine — or a six-second video that replays itself ad nauseam —Cooper appears in the foreground, on the bench, wearing a silver-and-blue tie. He appears mindful but perturbed at the on-ice action.

What Cooper doesn’t realize, and what immediately becomes apparent to the viewer, is the real action is taking place directly behind him. His assailant, who happens to be a little girl with a mint green bow and St. Louis Blues sweatshirt, teases him without mercy behind the glass. Her hands (and blue fingernails) gesticulating wildly as if to say: What are you even thinking right now?

Making an appearance as the physical buffer between the two: a yellow-and-black advertisement for The Parking Spot, an airport park-and-ride service. For Lake Bluff’s Mark Wildman, chief marketing officer of The Parking Spot, this kind of unscripted moment is nirvana.

Something else you could describe as an ascent to a higher plane of existence? Wildman’s favorite Sunday breakfast, which is the Sir Dugan Frittata at Egg Harbor in Lake Forest. The three-egg, open-faced omelette is filled with diced bacon, tomato and spinach, covered with melted jack and cheddar cheeses and topped with a dollop of sour cream.

But after many attempts, we weren’t able to meet for that tasty breakfast. The alternative? Eight-ounce filet mignons at Chicago Cut. Covered with black peppers, the filets have been given the treatment: aged for 35 days and butchered on site. Wildman and I, for our part, are trying our best not to tear into them like wild men.

Like most of the dapperly dressed people at the downtown steakhouse, we’re talking business. The business of being visible.

“The sport signage puts us in a position to either be in the background for a highlight or ‘go viral’ on the web when something unusual like this happens,” says Wildman. Dropping the cutlery to swirl his vino, he explains that in the case of the little girl pantomiming coach Cooper, it’s the latter. But both tend to happen more often than one may think — in part, because Wildman has strategically positioned his brand to be noticeable.

The Parking Spot had similar good fortune last year. During the NHL playoffs, Joel Quenneville, head coach of the Chicago Blackhawks, didn’t like a call. He displayed his discontent with, what looks to the casual onlooker, like a barrage of disco-inspired hand gestures, capping off his tirade with the coup de grâce of gesticulation—a grab of his private parts — in front of The Parking Spot’s bench sign. (His “performance” generated millions of impressions, including a YouTube video set to Michael Jackson’s “I’m Bad.”)

It helps that it’s particularly easy to notice The Parking Spot’s . . . spots. The print, a contrast between a yellow background and black dots of various sizes, which look as if they are taken from the complexion of a Dr. Seuss animal, cover everything: advertisements and shuttles, but also coupons and reward cards, from New York City to Los Angeles.

According to the conventional wisdom, a leopard can’t change his spots. But that thinking never took into account an airport shuttle. When business mogul Penny Pritzker launched The Parking Spot in 1998, the off-airport parking service looked like the other shuttles. Drab. Dull. The only thing with which to distinguish it from the myriad competition being a large “P” centered on a yield sign. But the shuttles were gray. Boring.

While they already had the beginnings of a brand in a trademarked, distinguishably different name, says Wildman, “what they didn’t have was an icon that would stick in your mind like the Nike swoosh or the McDonald’s arches.”

At the time, Wildman was living in Lake Forest, working as a marketer for Miller Brewing in Milwaukee. He had already found success in dynamic, visually appealing brand placement: When MillerCoors replaced Budweiser as the official beer sponsor of the Chicago Blackhawks, Wildman had the Zamboni painted in the colors of Miller Genuine Draft, black and gold. Which gave it a look not unlike NASCAR legend Rusty Wallace’s racecar. The fans loved it.

Wildman eventually gravitated to Chicago, after being poached by Pritzker. Six months into the job, he was standing at Los Angeles International Airport, trying to understand how his customers viewed ground transportation and off-airport parking.

In an epiphany moment, he saw what he describes as “a sea of sameness.” Not only were his competitors doing away with the “and” in favor of “N” — Park ‘N Fly or Park ‘N Go — they were also being lost like a tired businessman in the minutia of parking lots. “The gestalt of the brand,” notes Wildman, was missing.

In 2000, The Parking Spot unveiled a new design. Working with the same ad agency he had used at Miller, Wildman spearheaded the updated look —the spots. Says Wildman, “It [made] us look really big without having to spend too much money.”

He’s also quick to add, however, that the eye-catching graphics and branding only worked because the service was operating at a consistently high quality. If not, such marketing has the potential to slide into the gimmicky realm of cheap tricks.

“Most people, they have a favorite airline. They probably have a favorite hotel chain. But for airport parking, before we came along, people never thought about it,” says Wildman. “We actually got people to think about where they park.”

In 34 locations around the country, (most recently at Baltimore-Washington International Airport) The Parking Spot — now owned by Green Courte Partners, LLC, with roots in Lake Forest — has taken over the niche marketplace that is off-airport parking.

And while yellow and black is the color of choice, sports teams’ sponsorships add funky flavors to certain airport shuttles. Wildman is to thank for that. A self-described hockey nut — he describes the period after the Minnesota North Stars left for Dallas as his “mourning period” — he has seen three Stanley Cups awarded in person. He has also inked sponsorship deals with 38 sports teams, everyone from the Dallas Mavericks, the St. Louis Blues, and even the New York Yankees (“there’s always a way to give somebody a better experience, even for the Yankees”).

In fact, Wildman was at the very Blues game where Coach Jon Cooper was being mercilessly taunted by a little girl. From the press box, Wildman watched the game; casually chatting every now and then with the Blues’ radio play-by-play man, Chris Kerber, during commercial breaks. After play resumed, Kerber surprised Wildman by taking a moment to welcome him on-air, telling everyone about the great service he repeatedly gets from the spotted fleet of shuttles.

Going viral is all well and good, but having an announcer talk up your business? Says Wildman, “It doesn’t get much better than that.”