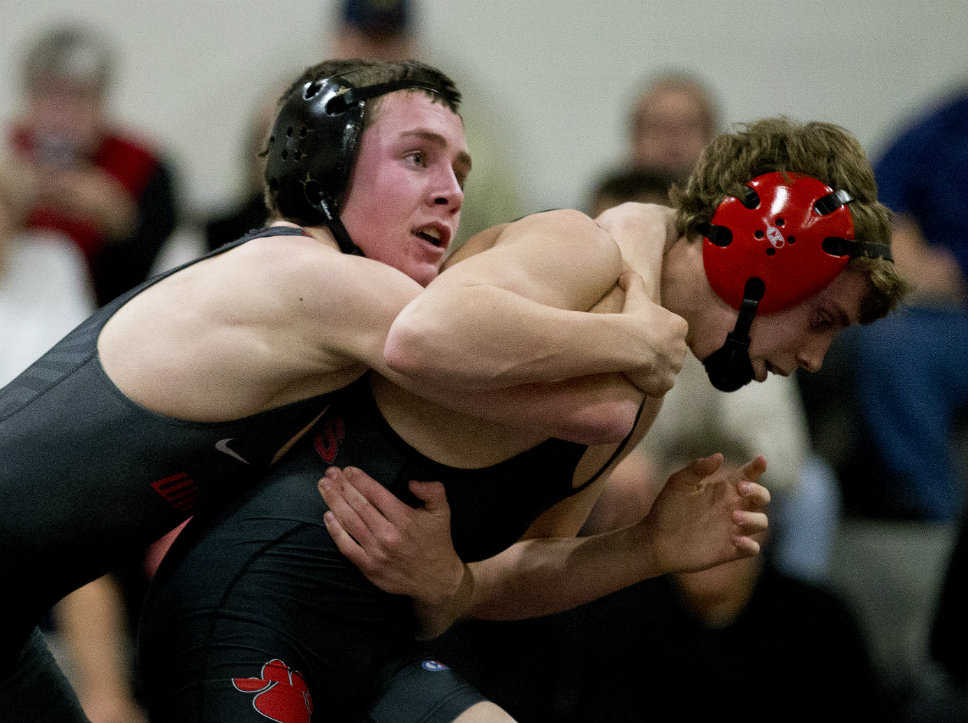 Deerfield High School’s Dylan Utterback (left), seen here in earlier action this season, has qualified to state along with five of his teammates. Photography by Joel Lerner

He might have been a little beat up. But no one could knock that smile off his face.

And then, he added: “I wouldn’t trade how I feel right now for anything.”

In other words, Pechter was as proud as a so-called peacock following his team’s impressive showing at the Class 3A Barrington Sectional on Feb. 14.

Highlighted by the first-place performance of junior Andrew Mehrholz, the Warriors scored a team-high 110 points and advanced six wrestlers to this weekend’s state tournament in Champaign.

Mehrholz, who took third in state a year ago, defeated DeKalb’s Brad Green 8-5 to claim the 138-pound title.

The junior will head to state with a 42-2 record.

Teammate Sage Heller (43-3) captured runner-up honors at 160. The junior gave Libertyville star Joey Gunther, who is ranked No. 2 in state by Illinois Matmen, all he wanted.

Heller, a junior, scored a two-point near fall against Gunther in a wildly entertaining third period. He eventually lost the match 11-7.

“I’m not sure if he (Gunther) has been put on his back this year,” said Pechter.

Deerfield certainly cashed in on the semifinal wrestlebacks, which is known as the “money round.” Four out of six Warriors claimed wins to earn state berths, including Dylan Utterback at 106, Kyle Clough at 113, Nick Kupets at 126 and Brady Glantz at 170.

Utterback will take a 41-6 record to state. The sophomore edged Wheeling’s Mason Skloot 5-2 in the third-place match.

Glantz (40-4) finished with a flourish. The senior scored a major decision (10-1) in the semifinal wrestleback and then pinned Highland Park’s John Ciancio for third place.

Clough, a sophomore, moved his record to 40-6 with his fourth-place showing.

Kupets, a junior, is now 38-13 after taking fourth in the sectional.

The near misses include freshman Kenny Kerstein at 120 and senior Christo Moran at 220.