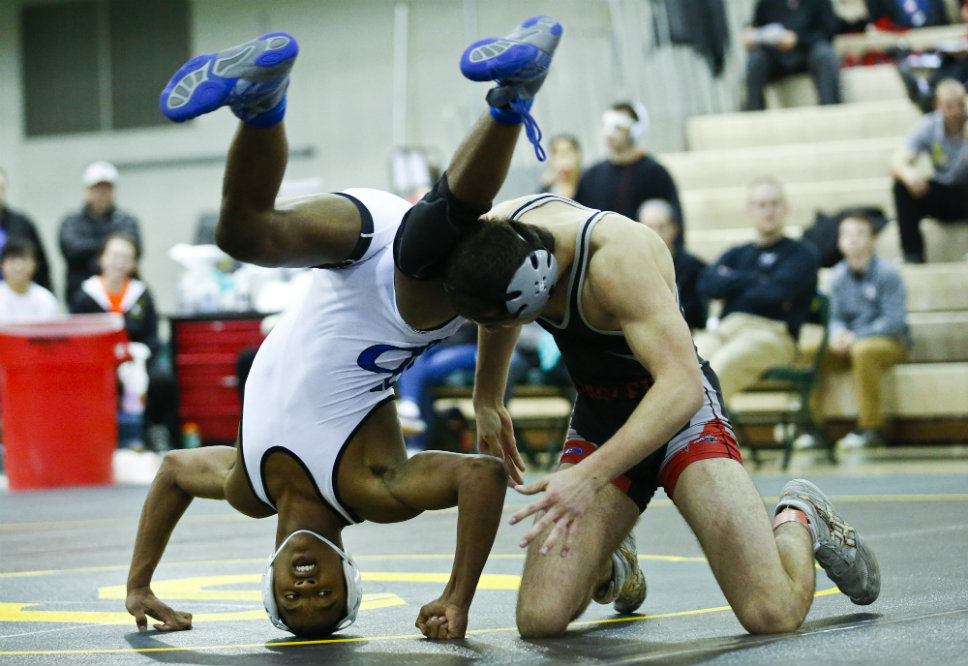 What unfolded next, on Feb. 7, was frenetic, crowd-pleasing, dizzyingly delightful and … confusing. The scoreboard indicated a 13-13 tie at the end of three periods, after Penick had executed a flurry of impressive moves.

The moves, in order:

One point, two points and three points, all of them unanswered.

That was how Giants coach Chris Riley saw it.

Penick should have been a 14-13 winner in Riley’s mind. The scoreboard still read 13-13. The wrestlers stood around. Riley and a referee met near the scorer’s table. Would an overtime period have to be staged? Would the referee grab a Penick arm and raise it for all to see who had won? Waiting, waiting, waiting. Everybody had to wait. Riley and the referee talked some more. More waiting.

“I was 99-percent sure that DJ earned a six-point swing there at the end,” Riley would say later.

“He’s a ridiculous athlete,” Riley said of Penick (32-2). “He does things his way. The part I loved about his effort [in the final] was how he kept looking for opportunities to score. He never stopped wrestling. Never. Those last nine, 10 seconds [after Penick’s six-point outburst], DJ had to maintain control, had to make sure he didn’t allow another point. I was proud of him for that, too.”

Rosenbloom (26-5) entered the final at 126 pounds a year removed from a frustrating moment. Illness had prevented him from advancing out of an Illinois Elementary School Association (IESA)regional as a Norwood Junior High School grappler.

“I knew what he had,” Rosenbloom said of his opponent (Libertyville senior Dan Schilling) in last weekend’s final. “I knew I had to wrestle my style.”

“Quick,” he said. “Be aware of my position at all times, set up my shots.

“I trained hard for this moment,” added Rosenbloom, holding a framed bracket of his weight class.

Next up, on the championship mat, was Cohen, who congratulated Rosenbloom with a quick back tap. Rosenbloom wished his teammate luck. Cohen did not need it. Cohen (31-5) trounced Stevenson senior Nathan Reinsdorf 8-0 for the title at 132 pounds and his first sectional berth.

“That motivated me, watching Alex do what he did,” said Cohen, fourth (at 126 pounds) at a regional last winter. “He got his title; I wanted one. Alex has worked so hard. He’s not intimidated. He’s a freshman, and he’s already doing special stuff. Our coach likes to say, ‘Age doesn’t matter.’ ”

“We wrestled as well as we could have,” Riley said. “Things fell into place for us. We won good matches, tough matches. We won toss-ups. I’m very pleased for the kids and for the program.”

HP finished fourth (111 points) at the nine-team regional. Five Giants vie for state berths at the Barrington Sectional on Feb. 14.

Notable: Riley, on Rosenbloom: “I thought he had potential at the beginning of the year. Freshman year … it is such a growth year. Alex did a great job. What he did [Feb. 7, at the Stevenson Regional], the way he won, didn’t surprise me.”