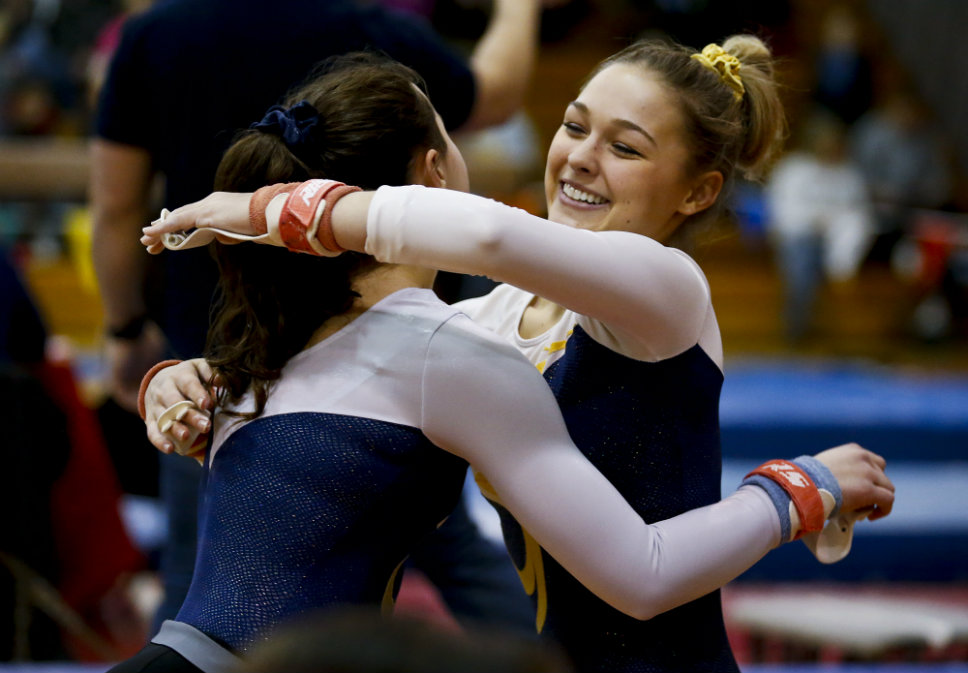 They scrunched and knelt together on a floor-exercise mat after a sectional gymnastics meet earlier this week, forming a tight circle. Glenbrook South High School’s girls gymnasts also bowed their heads as the Mundelein Sectional announcer read the final scores of the six participating teams.

Titans popped their heads up, looked at each other. They had done it. They had topped the field. But they did not erupt for joy and break up their circle to celebrate fully until they had heard their official total of 142.625 points.

“We had talked about not being concerned with beating other teams at this meet,” Titans coach Steve Gale said. “We were only concerned with what we do, what we’re supposed to do.”

His tunnel-visioned crew hit 19 of 20 events at a meet many consider more pressure-packed than the state meet. Titans sophomore Hannah Hartley, nursing a season-long right ankle injury (overuse), qualified automatically in two events, finishing third on floor exercise (season-high-tying 9.6) and fourth on vault (9.45). She took seventh in the all-around with a 36.325, which should be hefty enough to earn state at-large status.

“She’s been an inspiration to me,” Glenbrook South senior Kaci Castino said. “She’s made my senior year so special. Hannah loves the sport so much. You can tell. Just watch her. Watch her compete, and you’ll notice it.”

Castino, a captain, placed 16th in the all-around (34.85), hitting all four of her routines. The best gymnastics season of her career got better at the sectional.

“Kaci,” Gale said, “has blossomed as a gymnast this year. Her senior year, and she has not backed off, not backed off at all. She’s doing a wonderful, wonderful job for us. As a team leader, she is positive, upbeat, everything you’d ever want from a captain.”

South amassed a meet-best aggregate of 37.4 on vault — the Titans’ final event.

“A lot of good stuff happened tonight,” Gale summed. “The team did quite well, top to bottom.”

The two-day state meet starts at Palatine High School on Feb. 20. The Mundelein Sectional was the first of four scheduled sectionals this past week.

“That will gives us plenty of time to recover,” Gale said.

Notable: The last GBS girls gymnastics team to advance from a sectional meet finished eighth (142.425) at the state meet in 2001. … Gale, on Wahl, who went 4-for-4 at the Mundelein Sectional: “Tough, tough competitor.” … Hartley recovered nicely after falling off the beam and settling for an 8.225 (22nd place) at the sectional, scoring a 9.6 on floor and a 9.45 on vault. The slip did not douse her competitive fire in the least.

Carli Betman likes to bake every now and then. The Glenbrook North sophomore gymnast often distributes her treats to students in her peer group at the school.

The Spartan’s recipe for nailing her floor routine at the Mundelein Sectional on Feb. 9? A dash of atmosphere and immeasurable adrenaline.

“That [adrenaline] had a lot to do with it,” Betman said of her fourth-place and state-qualifying 9.55 floor show. “My tumbling was high. I also focused a lot on form.”

Glenbrook North, runner-up at the New Trier Regional on Feb. 5, finished sixth (139.075) at the sectional.

Warriors sophomore Brooke Buranosky finished 21st in the all-around (33.65) and tied for 15th place on vault (9.175) at the Mundelein Sectional.