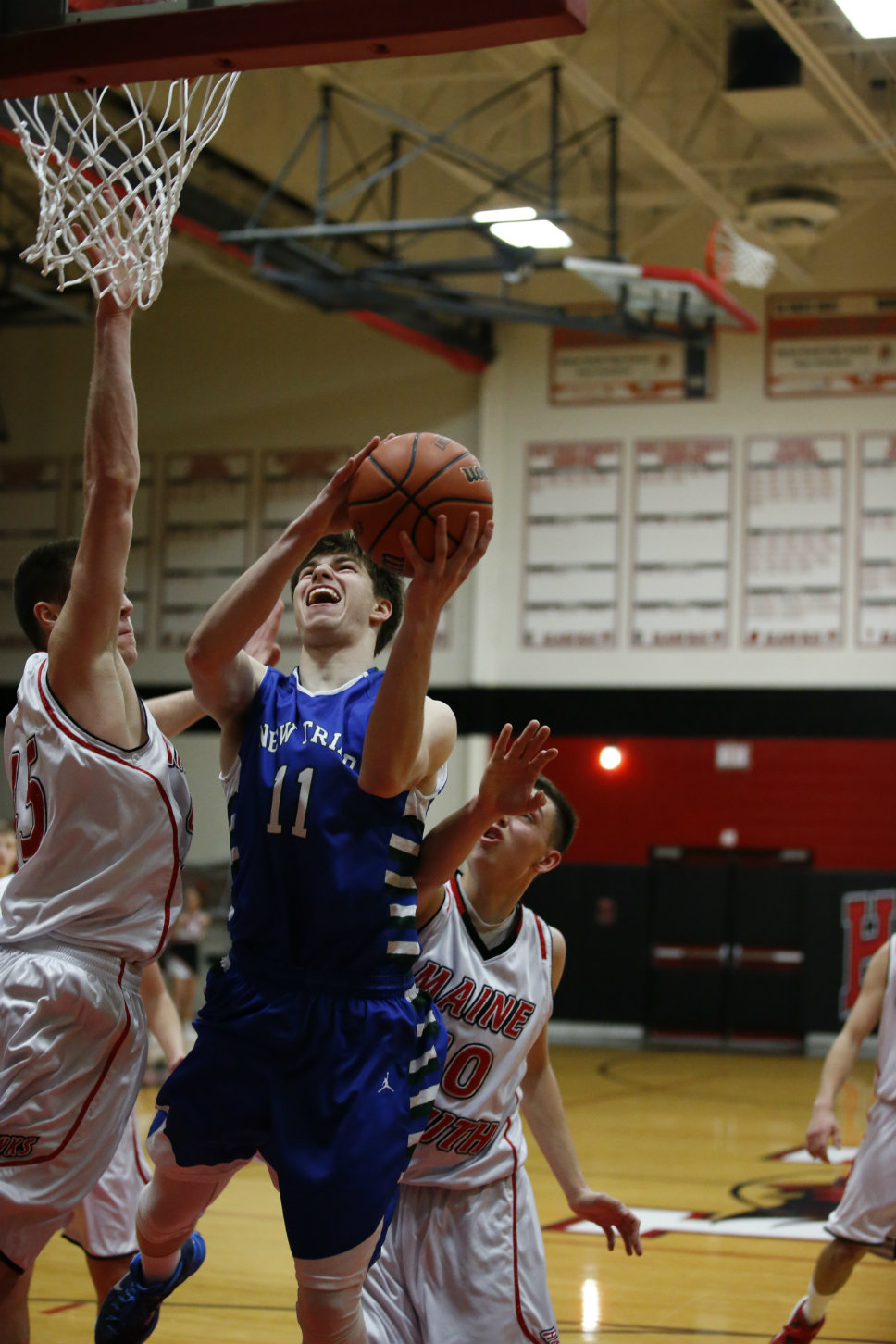 New Trier’s Sean Boyd takes it to the hoop against Maine South. Photography by Joel Lerner

It was the first day of New Trier High School’s boys basketball camp last summer. Sean Boyd ran around, dribbled, took shots, flashed his Hollywood smile. Life was good for the senior to be, a starting junior center for the Trevians’ varsity last winter. Life was fun. Life was full of sunny days and possibilities.

An hour later, in Skokie, Boyd prepared to … undergo surgery for a spontaneous pneumothorax. The Hollywood smile was gone.

“It got a little scary,” Boyd recalls. “Freaky. What happened that day was a freaky thing.”

Boyd had suffered a ripped lung on the basketball court that day. The rip collapsed his lung. The pain was searing.

“I twisted in a weird way,” the 6-foot-5, 190-pounder, still perplexed, says more than six months later. “That’s how I got hurt. My mom [Monique] happened to be at the school at the time. She’s a glass art teacher. She drove me to the emergency room.”

Sean Boyd recovered. The injury wiped out his entire summer of basketball, a crucial period of time for players interested in attracting the attention of coaches at the next level. Boyd, a wide receiver, went out for football. Mononucleosis took him down this time, ending his time in helmet and pads in the seventh week of New Trier’s playoff season.

Basketball season arrived. Boyd, in high tops, was not in tip-top shape. He had lost 15-20 pounds. He earned a spot as a starter, though, at the beginning of the season.

“I did get pulled from the starting lineup,” says Boyd, who has since regained his starting spot. “I understood that decision, because I wasn’t ready. I didn’t feel ready. It took about three weeks into the season for me to feel like I was in shape.”

New Trier and its coach, Scott Fricke, missed a 100-percent Boyd in the early going. The team won its first two games, lost its next four. It owned a 5-5 record on Dec. 22, a 6-6 mark four days later.

“He’s a key to our team,” Fricke says of Boyd. “He’s a valuable high school post player, a player who can score with his back to the basket, a player who can shoot and rebound and jump quickly. Sean can guard a point guard and a center. I like, I really like, guys who can guard different positions.

“We needed him to get his legs back.”

NT won seven straight games from Jan. 9-19. Boyd got his legs back. Boyd elevated, elevated, elevated for an alley-oop pass from junior guard Michael Hurley in a tournament game at Rockford Jefferson High School last month. On his return to the court, he threw down a dunk.

“Sean,” Trevians senior guard David Hammes recalls, “poster-ized a kid on that dunk. Sean gives us energy. Sean does a lot for us as an undersized big man. He’s good on defense, wherever he is on the court. We switch often on defense.”

Boyd’s offense sparked the Trevians at the end of the first half and at the outset of the second half in a 65-38 defeat of visiting Niles West on Feb. 6. The ‘5’ — he calls himself a “stretch 5” — nailed a three-pointer to beat the first-half buzzer, upping NT’s lead to 33-17. He then scored on a put-back bucket in the first minute of the third quarter and fed an assist to Hurley 1:09 later.

Boyd finished with seven points and a team-high nine rebounds. He was averaging 7.0 points and 7.4 rebounds for a 16-9 team (7-3 in the Central Suburban League South) after NT’s 48-37 loss to Benet Academy at Loyola Academy on Feb. 7.

“I’m not a big flashy scorer,” he says. “I don’t have to be on this team. We have the best shooters [in the CSL South]. I do the dirty work, clean up the boards, shoot when I have to shoot. I’m fine with my role. I enjoy my role.”

His role as a sudden patient last summer got him thinking about his future, as family and friends visited him in a hospital room. He observed his doctor. His doctor was professional and caring and friendly.

“A great guy,” says Boyd, whose half-brother is a surgeon in California. “What I experienced after the injury, the whole process … it made me consider majoring in pre-med, a career as a doctor. I’m looking at bigger schools [University if Illinois, for one]. I’m looking at Miami [of Ohio].

“Right now,” he adds, “I love what I’m doing, playing basketball in the second semester of my senior year, having fun with my friends.”

Taking a glass art class at New Trier, too. Yes, Sean Boyd is one of Monique Boyd’s students. He sits in the front row. Mom teaches. Son learns. Son tries to make his mom laugh. Mom continues to teach.

There is a light side to Sean Boyd, a side Hammes labels “goofy.” There is a serious side to him as well. You see that on basketball courts. Fricke recognizes that side, appreciates that side.

It is 30 minutes after a recent game at New Trier. Fans and players are milling around the hardwood and chatting. Boyd stands next to Hammes near midcourt, Hammes smiling and trying to capture the essence of Boyd, the teen, and Boyd the hoopster, in words.

“Sean is bubbly, charismatic,” Hammes says. “Sean is more comfortable on the court this year. Everybody knows Sean. Everybody who comes to our games, they’re here to see Sean.”