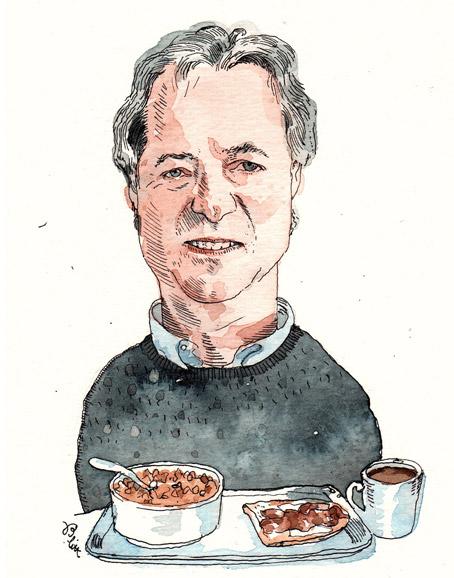 Ensconced in the Racquet Club of Chicago on a February morning, Englishman James Bruce talked about his plans for the day.
That afternoon, he would play a game of court tennis (called real tennis abroad). At nightfall, he would entertain the private club’s members, giving a talk about his recently published illustrated history, “The Neptune Book of Tennis and Rackets.”

Five years ago, there would have been no reason for Bruce to stop in Chicago. The Racquet Club, which had built a court tennis court in 1924, dismantled it in 1936 in favor of a lawn tennis court. But more than three quarters of a century later, thanks to Club President Ally Bulley and others, it was restored and is now one of 11 in the United States, with the possibility of a new one in Charleston, S.C., looming.

“I love anything to do with the game,” says Bruce. “It’s much more stimulating than lawn tennis and requires much more thought.

“Today, the world champion (Robert Fahey) is 46 — in other words, the clever older player can outwit someone 20 years his junior. You can’t imagine someone 46 winning Wimbledon. Real tennis, you can play until you drop dead.”

What, exactly, is this sport, one mentioned in Shakespeare’s plays, that played a role in the beheading of one of Henry VIII’s wives and whose heritage makes any lawn tennis snob look like a parvenu? It is a game with a small but zealous following. The original form of tennis, it is played indoors with somewhat heavy wooden rackets, hand-stitched balls that barely bounce, dark walls and a drooping net. Serves are attempted only from one side of the court. When a ball bounces twice, the point is not always lost; rather, a “chase” is called, and that point is played again once players switch sides. Most courts were built in this country more than a century ago, before the advent of radio and, in some cases, cars. Ones built today cost more than $500,000.

For Bruce, the game is in his blood. His grandfather, Clarence Bruce, played at Oxford University and captured the United Kingdom amateur championship. His father Morys, Lord Aberdare, was also a champion — and, in fact, Bruce’s work revises and adds the latest information to “The Willis Faber Book of Tennis & Rackets” originally put together by his father in 1980.

“People started to say to me, ‘We’d like to have an update,’ “ says Bruce, who plays court tennis twice a week at the Lords and Queen’s Tennis Club in London.

This offering is the first time color graces many pages. A new chapter discusses the building of courts, while another on disused courts has been expanded. The 448-page tome (which costs 35 pounds, plus shipping, at www.tennisbookshop.com) is extremely well-researched, tightly written yet covers great breadth. Ever wondered why tennis is scored 15 points at a time? Did you know it was first played with one’s hands? Bruce covers it all.

On the rackets side especially, “there were one or two rather fascinating discoveries,” Bruce says. He unearthed an open-air court in Newcastle, Jamaica. Because of the British Army, at one point about 70 rackets courts existed in India.

“They were seen as a vital ingredient for the officers — playing helped keep them healthy,” says Bruce of the game that features a rock-hard ball that flies at such high speeds off walls that men could be killed by it. Only eight courts remain in the United States of the game that gave birth to squash, though a century ago Chicago itself featured as many (Geoffrey Atkins, who reigned as world champion from 1954-1970, is a former resident of Lake Forest).

How does one help create the authoritative book on tennis and rackets? Bruce spent three years gathering materials and writing. Compared to his father, who was weighed down with files brimming with research, Bruce’s is only an inch thick — the rest is stored on his laptop. Bruce barely needed to travel, as the Internet provided great access for research. And, to top it off, he possesses arguably the best collection of court tennis and rackets books in the world, more than 200 volumes — including one published in 1550 — in a library that was started by his grandfather.

Asked what his father — a member of the House of Lords who passed away more than a decade ago — would think of his work, Bruce didn’t hesitate.

“I know he would have been thrilled that I’ve done this,” says Bruce, who is involved with tennis and rackets charities in England. “When his book came out, it was a cause of astonishment to his children how he did it all,”