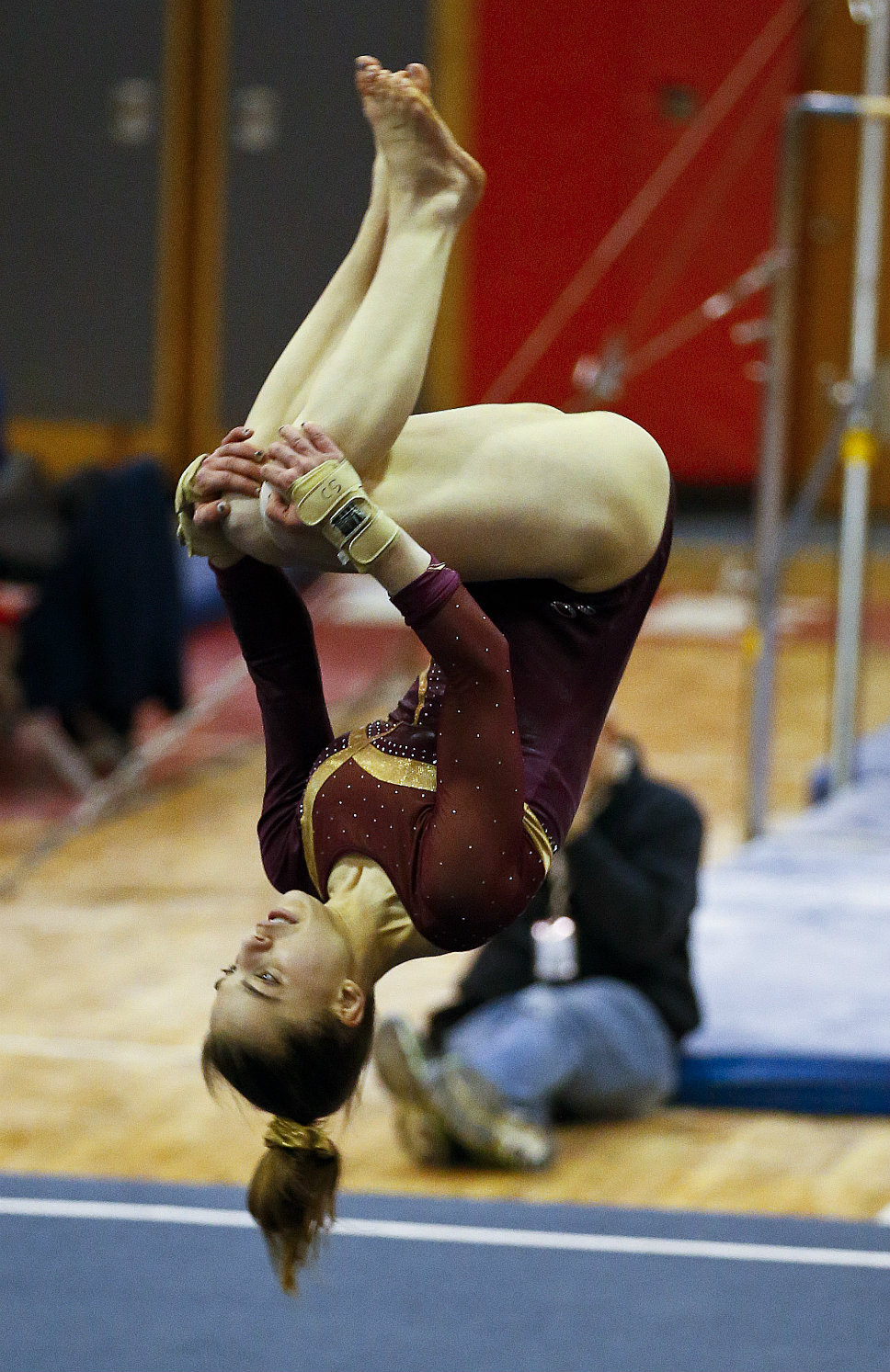 Claire Sullivan stood on a floor-exercise mat in a toasty gym earlier this week, thinking about the time she will get to spend in frigid temperatures this weekend.

The Loyola Academy junior gymnast, a Wilmette resident, has plans to settle herself into a snowmobile and zip around for hours in Wisconsin.

“I won’t be driving the snowmobile,” Sullivan said after the Mundelein Sectional on Feb. 9. “I’ll be in the back.”

She found herself at the top of the standings in an event at the sectional. Her score of 9.3 bested the 35-gymnast balance beam field and earned her an automatic berth to the state meet. The Rambler — the lone Rambler at the meet — also advanced automatically in the all-around (fourth place, 36.825) and on the uneven bars (fifth, 9.1).

Sullivan’s new beam dismount, an aerial back-tuck full, has given her a lift this winter. It certainly punctuated her runner-up score of 9.45 at last week’s Glenbrook South Regional.

“Lots of twists and turns,” she said of the dismount, though she also could have been referring to the typical path of a snowmobile.

The state meet does not start at Palatine High School until Feb. 20. That gives Sullivan plenty of time to refocus on her gymnastics after returning from a three-day break in Wisconsin on Feb. 15.

“I had a lot of fun at this meet,” she said at the sectional. “I wasn’t too stressed. I had a positive outlook.”

It had also forced her to miss the Central Suburban League South and a home regional meet.

“Hearing the national anthem today, that got to me, made me emotional, knowing I wouldn’t be able to compete with my teammates,” Stoddart said near the end of the sectional on Feb. 9. “Then, when I saw the floor routine of a club teammate [Libertyville freshman Rachel Weis], that was tough, too. Her routine is similar to mine.”

NT finished in a tie for fourth place (139.24) at the sectional, ending its run of consecutive state meet appearances at three. Senior Claire Egerter emerged as the Trevians’ top all-arounder, finishing 12th (35.475). Junior teammate Peyton Burns placed seventh on the uneven bars (9.025) and 11th on floor (9.175). Burns has a good shot at advancing to state as an at-large qualifier on bars.

“They’re doing everything we had asked,” Trevians coach Jennifer Pistorius said after three events at the sectional. “They added difficulty to their routines. They’re trying hard.”