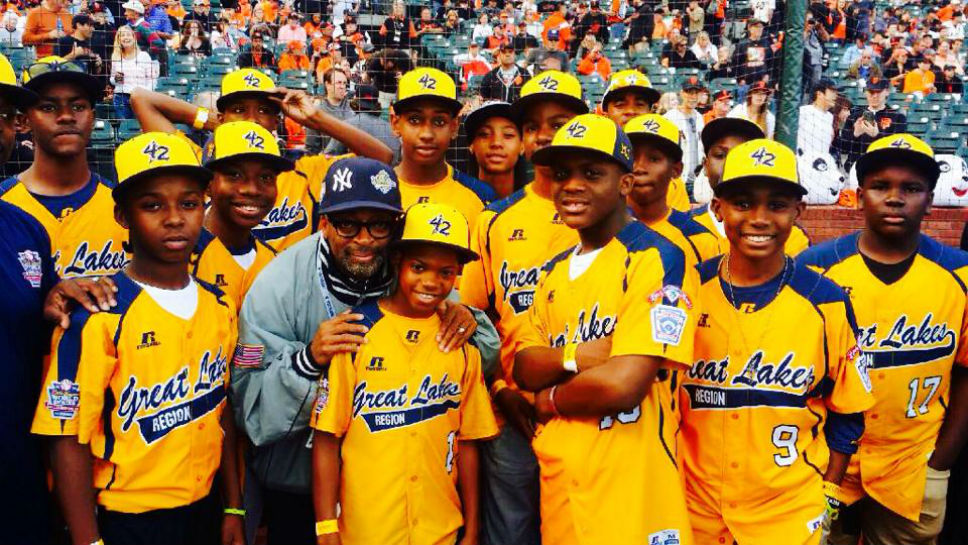 The team pictured with Spike Lee (photo courtesy of the Village of Northbrook).

Northbrook is not giving up on Chicago’s Jackie Robinson West baseball team, despite news that that the celebrated Little League National Champions were stripped of their title. It was a result of the international committee investigating allegations that had come forward (mostly fueled by the runner-up Las Vegas team) that JRW had abused powers in pumping up its lineup with all-star talent, including players from the suburbs, which violated league boundaries. Reactions were volatile at best, with many questioning how the actions of adults could lead to such an upset for a group of children who captured our collective attention over the summer.

Even Mr. T added to the conversation aligning with the general sentiment from the public when he tweeted: “I still support the Jackie Robinson West Little League!”

Another group echoing this perspective is the Northbrook Community Relations Commission, which planned—and is still planning on—hosting the Jackie Robinson West team in a special celebration, Q&A and meet and greet on February 21 as part of its annual series to honor Black History Month.

“Northbrook’s Community Relations Commission remains committed to fulfilling its mission of fostering and promoting understanding, mutual respect, cooperation and positive relations by hosting its annual Black History Month Event,” said Village Communications Manager Cheryl Fayne-dePersio in an official statement released to the media. She continued, “The theme of this year’s event is to celebrate America’s favorite pastime, baseball, and the history and accomplishments of America’s black players. The Commission expresses their sincere gratitude to the young players of the Jackie Robinson West Little League team for the drive, devotion and spirit they have brought to the youth baseball community. We fully support these incredible young athletes, and extend an open invitation for them to participate in our event.”

The special program will be held Saturday, February 21 from 12:30 to 2:30 p.m. at the North Suburban YMCA, 2705 Techny Road and is open to all ages. The day will include a meet and greet, free “ballpark-style” lunch and a short film about historical Black baseball players like the recently deceased Ernie Banks who helped change the game. A Q&A session with members of the Jackie Robinson West Little League Champions will follow.