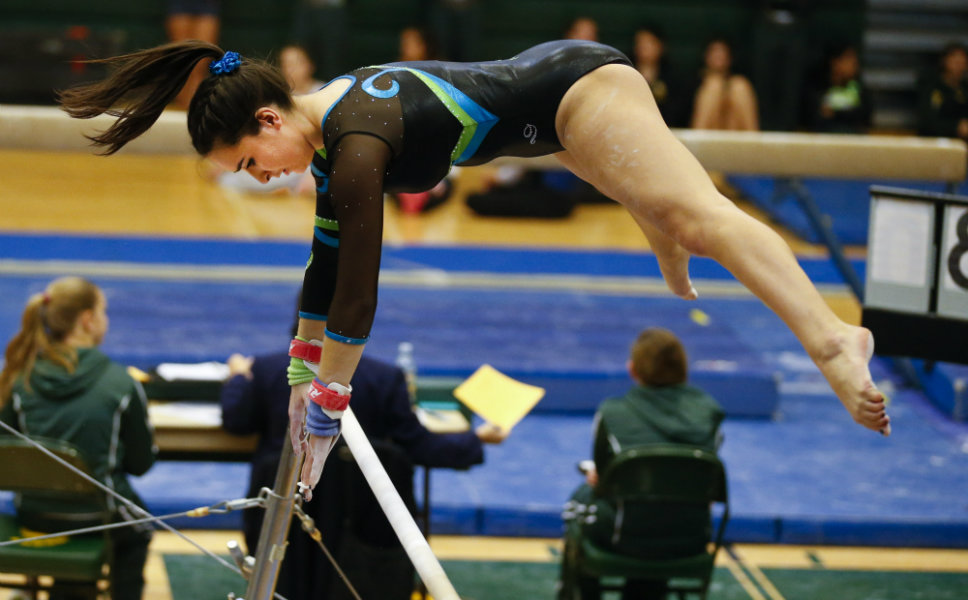 Claire Egerter competes on the uneven bars for New Trier. She took first in the all-around competition at the CSL South Meet. Photography by Joel Lerner

During her balance beam routine in a dual gymnastics meet at Glenbrook South High School last month, Claire Egerter fell. The New Trier High School senior rarely spills off the beam. The move that ejected her was a split three-quarters jump.

Egerter remounted the apparatus on Jan. 15, angry at herself, frustrated. She also was determined to make up for the hiccup by throwing a dismount she had never thrown before in a meet: two flip-flops, followed by a full.

Nobody at the meet expected Egerter to attempt such an ending, not even her coach, Jennifer Pistorius, who had competed that dismount during her days at Good Counsel High School in Chicago.

She ended up with an 8.4, but it probably felt more like a 9.4, given her breakthrough, given the resounding trick that reduced her slip-up on that silly trick to ancient history.

Imagine a smallish guard in basketball, driving a lane and, instead of settling for another safe layup, soaring and throwing down a dunk for the first time. In a game. In a game with basketball rims, positioned 10 feet from the floor.

“I’m glad I fell that day,” Egerter adds. “If I hadn’t fallen, I would not have chucked that dismount. When I landed on my feet, right away I thought, ‘I can add this.’ ”

She and the rest of the Trevians returned to Glenbrook South for the Central Suburban League South Meet on Jan. 30. Egerter had packed her still-new beam dismount. It would not stay in the suitcase in Glenview. Teammates, coaches and regular fans of the Trevians expected to see it again. All wanted to be wowed again.

Egerter mounted the beam. Everything looked clean, looked steady, as she executed her pre-dismount moves. Not one fall on this winter night.

She then stood still briefly, mentally measuring up her flip-flop-flip-flop-full. Egerter radiated confidence. Egerter threw it.

Her landing produced a feet-first thud, a gymnast’s favorite sound. Her sport’s slam dunk drew applause from the bleachers and tight hugs from teammates and coaches.

Judges gave her a 9.45, sharp enough for runner-up honors.

“Claire has always been a reliable gymnast,” Pistorius says of her fourth-year varsity performer and member of the Trevians’ three state teams from 2012-14. “She’s a huge component of the team. She’s been steady since her freshman year. We’ve had strong gymnasts [NTHS graduates Elana Benishay and Kerry Scafidi and current NTHS senior Sam Stoddart] during her time in the program. She’s been kind of under the radar. But Claire … what a great captain, a positive, smart kid, a kid who is always smiling.”

Egerter had exactly 35.95 reasons to beam while standing on an awards podium for the all-arounders at last weekend’s CSL South Meet. The figure was her winning total, highlighting NT’s runner-up showing (141.775).

“Amazing. I’m so proud of her, so happy for her,” Trevians junior Peyton Burns says. “Claire’s consistency … we count on that. You can always count on Claire in every event. If she makes a mistake, she doesn’t freak out. We also like that about her. She’s all about the team spirit, all about being friendly and bubbly.”

Her best friend is her twin brother, Colin, a soccer midfielder. Both enjoy Pink Panther movies, their dad, Dean, having turned them on to the series of comedic films featuring a clumsy, incompetent detective, Inspector Jacques Clouseau. Both will head to Vanderbilt University in the fall, Claire as a human organizational development major, Colin as a probable economics major and club soccer player. Colin attends Claire’s gymnastics meets. Claire floors Colin at her gymnastics meets.

“She is awesome,” Colin says. “It’s good to see how into she is and how confident she is. She gets into the zone at meets … that really competitive zone. But then, after getting out of the zone, she’s smiling. When you see her, you see excitement and energy.

“Claire,” he adds, “never approaches anything with a bad attitude.”

Claire Egerter would not dare perform her beam routine at a meet without first listening to “Stuck Like Glue,” a country song by Sugarland. Since her freshman year, Egerter has borrowed Pistorius’ iPod to listen to the tune. It’s a tradition. It’s an Egerter thing.

Only a handful of prep meets remain in Egerter’s gymnastics career. Wasn’t it just yesterday when a four-year-old Claire Egerter performed a somersault for Pistorius at Wilmette Gymnastics? Wasn’t it just last night when an eight-year-old Claire Egerter met a seven-year-old Peyton Burns and the two hit it off … after hitting routines? It’s been a comfy fit, Egerter and gymnastics, a match made atop mats. The sport has challenged her, thrilled her, steeled her. It will be a part of her, even after her final salute at her final meet later this month.

“I love high school gymnastics,” she says. “Every routine from every gymnast means something to the team. Knowing my score in an event could help my team achieve something motivates me; that’s not the case in club [gymnastics]. I love representing New Trier at meets. I love the opportunities to support my teammates at meets. Gymnastics has helped me see my potential.

“I’ve learned so much as a high school gymnast. Little things mean a lot in this sport. A little pep talk, before a routine, can make a big difference in this sport.”

Notable: Stoddart (illness) did not compete at last weekend’s CSL South Meet. … Egerter also tied for fifth place on vault (9.2) and tied for seventh on floor exercise (9.1) at the CSL South Meet. Top-eight finishers in each event and in the all-around earned all-league honors. Burns silvered on the uneven bars (9.25) and took fourth on beam (9.05) and floor (9.25). Trevians junior Taylor Kwok (seventh in the all-around, 35.025) placed third on floor (9.275) and fourth on bars (8.85). … New Trier was scheduled to host a regional meet on Feb. 5.