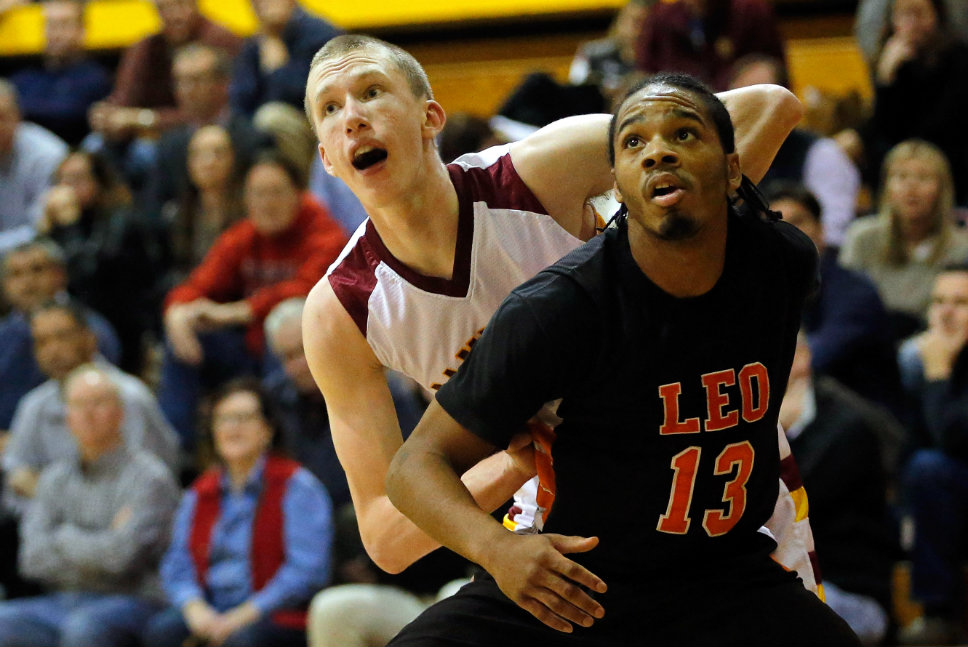 It’s fair to say that Peter Poggioli started the game in shaky fashion.

On his first two touches, the Loyola Academy senior tried to make something glorious happen on drives down the lane.

Both times he lost the handle — before getting to the rim.

“I just had to stay with it,” said Poggioli, following LA’s 43-42 heart-breaking loss to visiting St. Ignatius on Jan. 30. “But I didn’t lose my confidence. And I knew my teammates had my back.”

Flash ahead … to the second half.

In quarters three and four, he became larger than life.

“He grew up right in front of our eyes,” said Loyola head coach Tom Livatino. “I gave him a big hug after the game.”

“He’s a wonderful kid,” the veteran coach added. “And tonight, he was fun to watch.”

For Poggioli, this was 16 minutes of fame. In a flash, he became the wunderkind of Wilmette.

After a scoreless first half, the usually unheralded Poggioli tallied six points in the third frame and added 10 more in the fourth quarter. He took the ball to the hoop like a heavy-duty plow charging through 19 inches of snow. He either converted the layout or drew the foul. He was 7-for-7 from the charity stripe.

“His effort level is always phenomenal,” said Livatino. “Tonight, he broke through on the offensive end.”

The shot that made the gym shake — this game was played in front a highly excitable and boisterous standing-room-only crowd — was Poggioli’s three-pointer from the far left corner, right by the LA bench.

The basket that nearly brought the house down came 45 seconds later, when Dowdle — a cornerback on the LA football team — went all Tom Brady-like and rifled a pass inside to Poggioli, who quickly made it a five-point game.

Ultimately, the ending was bittersweet for Poggioli and his teammates. St. Ignatius (16-4, 8-1) went on a late 8-0 run and then survived a pair of potential last-second game-winning shots by the host Ramblers (12-8, 6-3).

“It’s tough to lose by one point,” said Poggioli.

But this game could have a lasting effect on Poggioli.
“It definitely adds a lot to my confidence level,” Poggioli said of his 16-point effort. “But I have to keep growing. Keep improving.”

Notable: Brandon Danowski was LA’s other offensive star. The junior guard scored his team’s lone two points in the opening quarter. He then popped in 10 second-quarter points and seven fourth-quarter points to lead all scorers with 19.

“Coach tells me to keep hunting for my shots,” said Danowski, who went 4-for-6 from three-point range. “He tells me to be aggressive on offense.

“It’s getting tougher to get open shots,” he added. “Teams are focusing on me (now).”

With the loss, the Ramblers relinquished the Jesuit Cup for the first time in three years.

The squad will play two games this weekend. The Ramblers travel to DePaul College Prep (15-5) on Feb. 6. Then, they host St. Patrick in a War on the Shore game on Feb. 7 at 6 p.m.

The other War on the Shore games include New Trier vs. Benet Academy at 3 p.m. and Evanston vs. Fremd at 4:30 p.m.