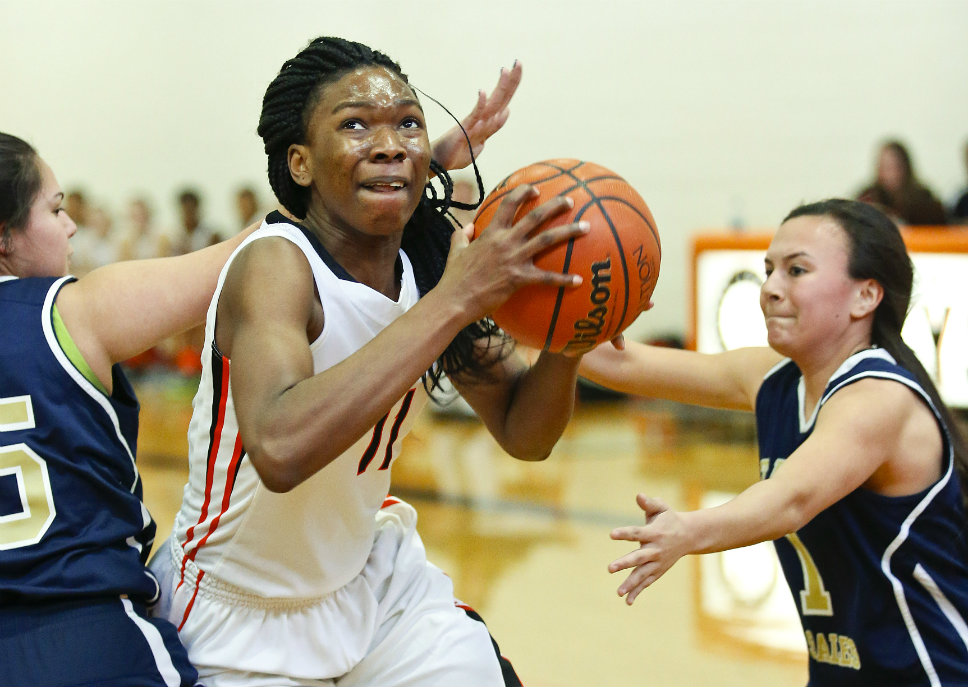 Lake Forest Academy’s Tessy Onwuka takes it to the hoop during win over St. Francis de Sales. She is averaging 20 points and 8.5 rebounds for the 17-2 Caxys. Photography by Joel Lerner

Lake Forest Academy’s girls basketball opponent, St. Francis de Sales High School, was running late. Most of LFA’s players warmed up for the game last weekend at one end of the home court, bouncing basketballs, making layups, shooting jumpers. One of their teammates, meanwhile, got down on all fours at the other end of the court, giggling and crawling quickly toward a giggling, scampering two-year-old named James Tennyson.

James, one of LFA coach Chris Tennyson’s three young children, and Theresa “Tessy” Onwuka, a 5-foot-11 power forward, enjoyed the impromptu chase for several minutes on Jan. 31. Both had an entire half court to themselves. Both would have been perfectly content had an official from St. Francis de Sales called to report that the team’s bus driver was lost. Or could not start the bus.

“Look at her,” Chris Tennyson said of the junior, a first-year LFA hoopster and native of Delta State, Nigeria. “Look at the fun she is having with my son. That smile of hers is electric, so genuine. She babysits my kids. She’s a great, happy-go-lucky person. She’s a difference-maker on the court. She’s a rock star.”

The team from St. Francis de Sales arrived. Onwuka rejoined her team. Li’l James had to search for fun elsewhere, after tottering to a spot behind the Caxys’ bench.

A close second, in the love department, is basketball, a sport she started playing at the age of 11 in Nigeria. The sport, along with her strong academic record, helped her find a home in another country. WorldPlayer ID initially matched Onwuka with Lee Academy, a private boarding and day high school in Maine. WorldPlayer ID’s mission is to connect the best African players with coaches around the world.

Onwuka transferred to LFA last spring. Tennyson first met his future high-scoring hoopster when Onwuka played for a travel team at a tournament held at McCormick Place in Chicago.

“Basketball gives me joy,” said Onwuka, who plays for All In, an AAU basketball team, in the offseason. “I’m here, in the United States, because of basketball. Basketball has changed my life a lot. I love it here at Lake Forest Academy. People ask me where I attend school. I tell them, ‘Lake Forest Academy.’ Then I always hear, ‘Oh, that is a tough school, so tough.’ I’m really challenged here. I like the challenges.”

Onwuka — averaging 20 points, 8.5 rebounds and nearly six assists per game for a 17-2 squad — played in only the first half of LFA’s 52-17 defeat of St. Francis de Sales. She scored 12 points, grabbed six rebounds, collected three steals and blocked a shot. How fast is the first step of her dazzling post moves? It is capable of seriously straining spectators’ eyeball muscles. Onwuka snared two offensive rebounds on one possession in the first quarter, securing the first carom while flying out of bounds; she passed the ball to an open teammate before returning to earth. The second offensive board of the possession preceded her put-back bucket at the 5:15 mark.

“Her athleticism is incredible,” said LFA senior guard Liza Tarr, a Winnetka resident. “Her spin moves, her shot fakes, the way she finishes … Tessy is strong, smart and unselfish. So many things make her a great teammate. She’s a great teammate, with a lot of energy.”

LFA trailed Deerfield High School 16-8 after one quarter on Jan. 27. LFA needed energy, lots of energy. LFA received it from Onwuka in the next two quarters. The Caxys outscored the Warriors 37-13 in the middle frames, 23-9 in the third.

Onwuka poured in 13 points in the third quarter of LFA’s 51-36 win. She finished with 24, two shy of her season high.

“She is not just a great scorer,” Tennyson said. “Tessy is also a great facilitator, a player who likes to get her teammates involved. That was fun, watching what she did [against Deerfield], watching a skilled player take over like that. She was impressive. She made things happen.”

She makes people laugh. Tarr accidentally bumped into one of Onwuka’s legs during a school day. Most would have kept on walking, chalking it up to an incidental clash. Onwuka responded dramatically, screaming, “Oh, my leg, my leg! I won’t be able to play basketball now!”

It was an act, nothing but an act. Fake an injury, look for a concerned reaction, laugh until the “offender” also laughs. If it startled Tarr for just a second, it was a win for Onwuka, a reason to celebrate a “Gotcha” moment.

“She can be a goofball,” Tarr said. “But everybody loves her, loves her smile. Kids and teachers love her. People enjoy being around her because she’s so engaging.”

Onwuka, a rookie volleyball player at LFA last fall, has received offers to play college basketball, Tennyson noted. She is looking at Ivy League and Patriot League schools. The nursing field intrigues her. She might want to become a doctor. Her favorite class this winter is chemistry.

Her favorite basketball player is former University of Connecticut star Maya Moore, a member of the Minnesota Lynx of the WNBA and the league’s reigning MVP.

“I like her post moves, the way she handles the ball, her shot,” Onwuka said of the 6-foot forward. “Her all-around game … it’s great. She works hard on the court. To be able to watch her play [in person], that would be the best day of my life.”

James Tennyson, 2, watched Tessy Onwuka play basketball on Jan. 31. Got to run around and play with her beforehand.

Days don’t get much better than that.

Notable: LFA’s Jasmine Sawyer scored all 10 of her points in the first half of the 52-17 defeat of St. Francis de Sales. Tarr and Aleeya Sawyer tallied eight points apiece, and Brianna Sturkey finished with a team-high four steals. Jenny Levitt paced the Caxys in rebounds, with eight. 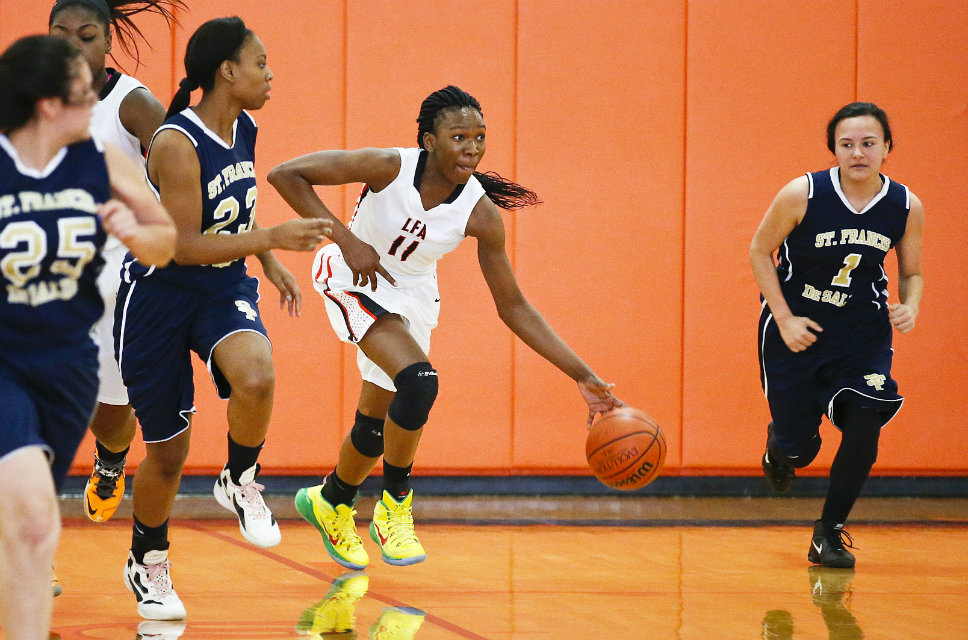