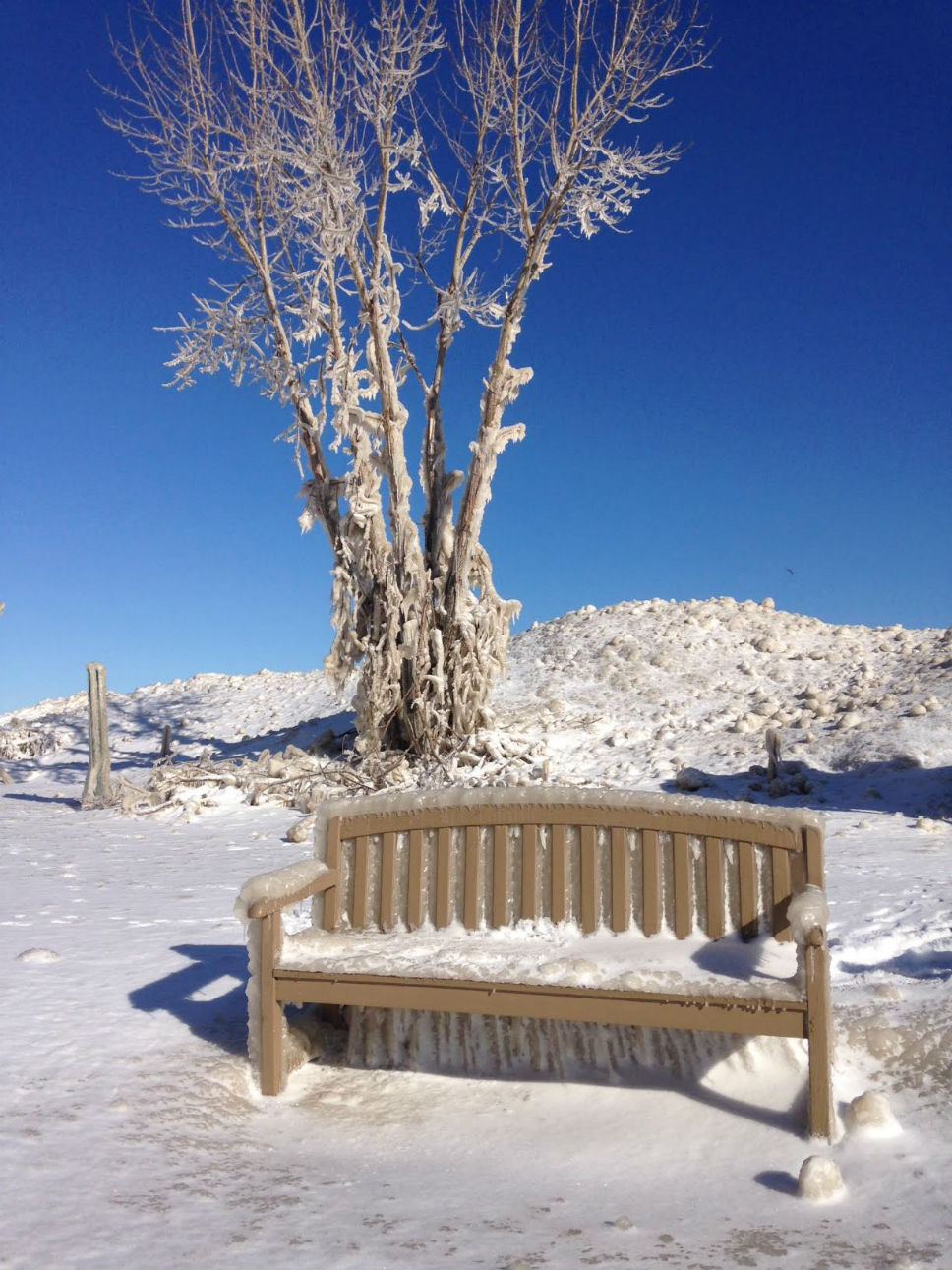 Ice encapsulates a tree at the south end of Sunrise Beach in Lake Bluff; photo by Bob Clifford

The Snowmaggedon was real this weekend as the area received its fifth most significant blizzard according to the Chicago Tribune. More than 19 inches of snow fell across the city and suburbs, crippling Super Bowl plans, delaying get-out-of-dodge travel at the airports and sending the morning commute into a spin-out tizzy. There’s not much better news to report today as national headlines are warning to brace for six more weeks of winter after the country’s most famous groundhog Punxsutawney Phil saw his shadow on his annual day and more (light) snow forecast for Tuesday, Wednesday and the upcoming weekend.

But at least we’re all in this together, right? Here’s a recap of what you and your neighbors got pummeled with and how city services are keeping up—or closing down—for the day.

School report: School Districts 30, 31 and 34 and Glenbrook District 225 were closed on Monday.

Park District programs: Splash Landings had a delayed opening today, at 7 a.m., for lap swim and warm water therapy public swim. Swim lessons and GTAC are cancelled for the afternoon. Wiggles and Giggles are closed. The Fitness center is open, but you are advised to check if your group exercise class is running. Park Center Preschool and all youth sports practices are canceled as are all dance and visual arts classes. And the Open Gym will have special hours from 12-4:30pm.

Official plow report: “As of this morning, crews have cleared the main roads six times and residential roadways at least twice, but have been met with difficult conditions due to the additional snow fall last night and the drifting snow from windy conditions.  Crews will continue major clean-up work today to plow residential roadways curb to curb. Once roadways are clear, crews will begin work to clear all major arterial sidewalks, including those along Harlem Avenue, Waukegan and Shermer Roads and Patriot Boulevard.”

Official plow report: “Village crews have been plowing around the clock since 8 p.m. on Saturday, January 31, 2015. Currently, the Village has its full allotment of snow staff and equipment out plowing. Arterial streets are nearing completion, and crews will be moving into side streets to make a final curb-to-curb pass. Crews have almost completed an initial pass of alleys, but will be making a second pass to address areas with parked cars. The sidewalks on the Business/Commuter Route were plowed and the village planned to start the School Walking Route later on Monday. Residential sidewalks will be started after these priority routes are completed.”

Official plow statement: “Public works snow plows have been plowing streets since Saturday night and will continue to do so until all streets are clear. Please assist snow plows by moving cars off the streets until your street has been plowed. As a reminder, the City’s snow ordinance is in effect through March 31. Vehicles may not be parked in excess of 15 minutes on any public streets between the hours of 2:00 a.m. and 6:00 a.m. This Citywide ban facilitates snow removal operations when necessary and decreases damage to vehicles parked on the streets or in City lots.”

Park District programs: Most recreation programs were canceled for the day including those held at the Recreation Center, Kinderhaven Preschool Academy,  the Wildlife Discovery Center, Lake Forest Dance Academy, District area schools, Stirling Hall children’s classes, Basketball and Squash programs. Open Gym was open after noon. The fitness Center remained open, but people are asked to check on class schedules. Only adult classes will meet in Stirling Hall. The Rec Center and CROYA are be open but all classes are cancelled. The Library opened 1 p.m.  Dickinson Hall,  City Hall and the Municipal Services building were open.