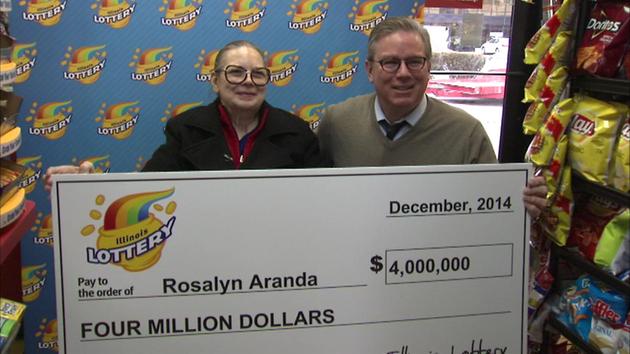 Rosalyn Aranda is one of the three lucky winners of the Illinois Lottery in Glenview.

There might be something in the water in Glenview. Since February of 2014, three people have won sizable amounts in the Illinois Lottery from tickets purchased at locations in and around town. All are women and all have won a million or more dollars—two from scratch off tickets and one from a special New Year’s Millionaire Raffle sponsored by the Illinois Lottery.

First was Athena Korines, a 51-year-old bartender at Glenview’s popular bar Potato Creek Johnny’s. The single mom often pooled her money with her friend Rob Devine to buy instant tickets, including the “Fabulous Fortune” game purchased at Chestnut Wine and Spirits last February. The pair won a $1 million prize, which they split.

“I didn’t believe it was real! When it finally sunk in, we signed the back of the ticket, put it in my purse and drove straight to the Prize Center in Des Plaines,” Korines said in a press released issued by the Illinois Lottery. With her earnings, she plans to buy a house and share the money with her children. Devine hopes to use it for retirement.

Then in December of 2014, Rosalyn Aranda took home one of the top prizes for scratch-off tickets, $4 million, after a friend followed a request to purchase her game piece at the Citgo gas station on Waukegan Road.

“I asked him to bring me back a big winner and he certainly did,” Aranda said in an official statement. The 67-year-old former pharmacist for Glenbrook Hospital played Santa Claus for her five sisters over Christmas and planned to use the rest of her winnings on bills and investments.

Most recently was 23-year-old Glenview resident Jenny Zajac who told her family at a New Year’s Eve dinner that her 2015 resolution would be to win $1 million in the lottery. Turns out her affirmation came true as she checked up on her $20 New Year’s Millionaire Raffle ticket she had purchased at a Marathon gas station in Niles and discovered the surprise.

“None of us could believe it was true,” the 23-year-old graphic designer said in a press release. She plans to use the earnings to pay off student loans, buy a house with her fiancé and invest for future savings.

According to Illinoislotterynumbers.net your chances of winning the jackpot are 1 in 20,358,520, so to have three winners in one geographical area of the state in such a short span of time is quite rare. Could number four be out there?