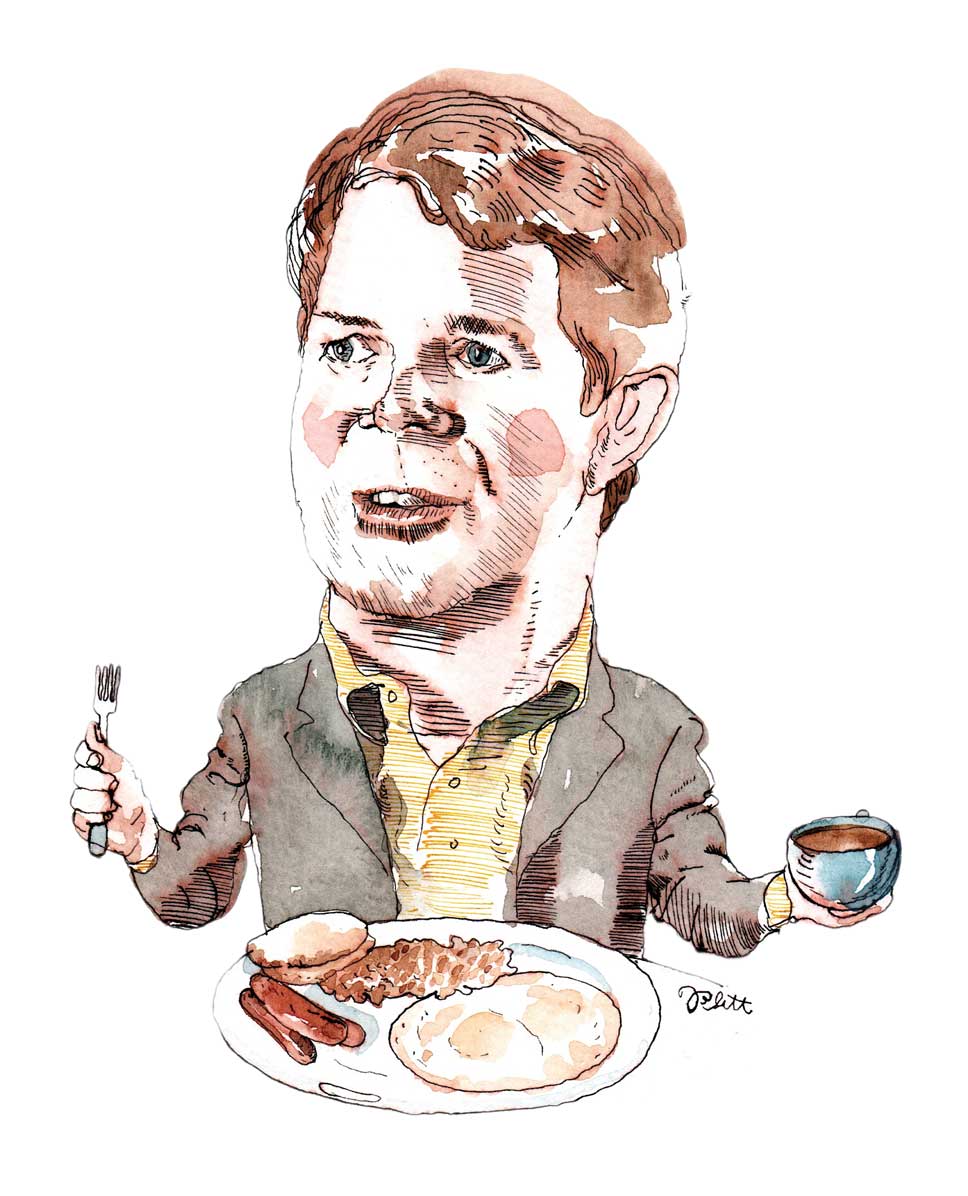 Le Peep isn’t bashful. The breakfast chain on the corner of Church and Benson doesn’t claim to have the best breakfast in Evanston, nor in Chicagoland or even the continental United States. No. Le Peep has its sights set on global domination, boasting the Muhammad Ali of taglines — Le Peep Restaurants: “The Best Breakfast Food in the World.”

Scanning the walls for a Michelin Star or a Guinness World Record certificate, my peepers instead fall on a man seated with a laptop open in front of him. He’s wearing a beige blazer. Bearing the hallmarks of a businessman — inquisitive, focused, caffeinated — Tim Calkins, who stands to introduce himself, is something more. He’s a clinical professor of marketing at Northwestern University’s Kellogg School of Management, and he is an expert on all things branded.

I ask him if he wouldn’t mind sending an email explaining what makes Le Peep, in his mind, a successful brand. His response: “A lot of brands try to be all things to all people and that doesn’t work very well. Le Peep is focused on providing convenient, tasty breakfasts. The restaurant is what it is: a convenient breakfast spot.”

Indeed. It’s also something of a tradition for the professor, who pops into Le Peep on his way to the Allen Center where he teaches marketing strategy, branding, and biomedical marketing in the masters of business administration and executive education programs. But on this morning, he’s looking forward to one thing in particular. The Big Game . . . of advertising.

“What I like to do is to get people to rethink how they watch the Super Bowl,” explains Calkins, who leads the Kellogg Super Bowl Advertising Review. What he describes as an “experiential learning program,” the advertising review allows his students to analyze the juiciest of spots — Super Bowl commercials — in real time. “At business school, we talk a lot about concepts and theories. This is an example of how we connect them.”

In the United States, the TV advertisement is generally considered to be the most effective mass-market advertising format. During popular events like the Olympics or the Academy Awards, networks charge millions of dollars for commercial broadcasting. But all televised events pale in comparison to the National Football League’s greenback juggernaut, the Super Bowl, which commands well over $4 million for 30-second spots during the game.

Why? Because they can — and there’s no competition. Year after year the Super Bowl tacks on another Roman numeral and breaks its own record, becoming the most-watched American television program in history again . . . and again . . . and again. In 1969, around 125 million people watched man take his first steps on the moon; last year, 167 million people tuned into Fox—to watch the Seattle Seahawks run all over the Denver Broncos in the swamps of New Jersey.

The Super Bowl spells big business in America. And like a hungry remora that has outgrown the underbelly of the great white, Super Bowl advertisements have become a cultural phenomenon in their own right, with the potential in today’s world to be more watched and shared than the game itself. This rings especially true for Calkins, who began seriously evaluating Super Bowl advertisements with his team at Kraft Foods and has since fine-tuned the program, now in its 11th year, at the Allen Center.

“One of the things we always have to tell the students when they apply — there’s no beer served,” says Calkins, who turns down hundreds of applications each year to serve on the panel. “And the reason we don’t serve any beer is because we need everyone to retain their intellectual faculties so we give a fair shake to the fourth quarter advertisers.”

Calkins acknowledges it’s a strange way to watch the game. “Every time there’s an ad, the room will get quiet.” The panelists sit there, eyes glued to the screen, intently grading the advertisements as they debut. They’re looking for a six-part framework concocted by Professor Derek Rucker, who oversees the program along with Calkins. The acronym, AD-PLAN, is broken up into gradable factors that determine the strategic value of each ad:

For most of us, it’s no surprise that the Seattle Seahawks are playing the New England Patriots in Super Bowl XLIX in Glendale, Ariz on NBC. Yet nobody knows what kind of ad Esurance, Microsoft, or Nissan will be running other than Esurance, Microsoft, and Nissan. In that way, Super Bowl commercials are a little like the Big Game itself, with a lot of planning and preparation going into one comparatively small window of time.

“Very rarely in the world of marketing do you see companies quite so exposed,” Calkins notes. “Nobody talks about what did someone run in terms of advertising during ‘Murder She Wrote’ or ‘CSI: Miami.’ ”

The pressure to think outside the box accounts for bizarre failures, like Audi’s Frankenstein canine creation, the Doberhuahua, or HomeAway’s launching a baby into a plate glass window. Thirty seconds isn’t a lot of time, but it’s enough to implode the fate of both brand and career. Successful advertising campaigns can go down as legend; clunkers will haunt executives for the rest of their lives. For every “1984” (Apple) introducing the Macintosh computer, there’s a “Tibet” (Groupon) crassly attempting humor that backfires.

But for Calkins and his program, that’s the beauty behind it all: knowing a team of people has worked desperately hard to put together a great commercial, and then trying to understand in what direction were they trying to go. He likens it to watching a sporting event when you know the rules, versus watching one where you don’t.

“Same thing with a Super Bowl commercial,” says Calkins. “When you really watch it and try to pull it apart, it’s much more interesting.” Welcome advice, especially for those of us feeling deflated from the off (and on) the field issues that have increasingly come to pass this year. Maybe a welcome distraction in the form of a commercial is just what we all really need.