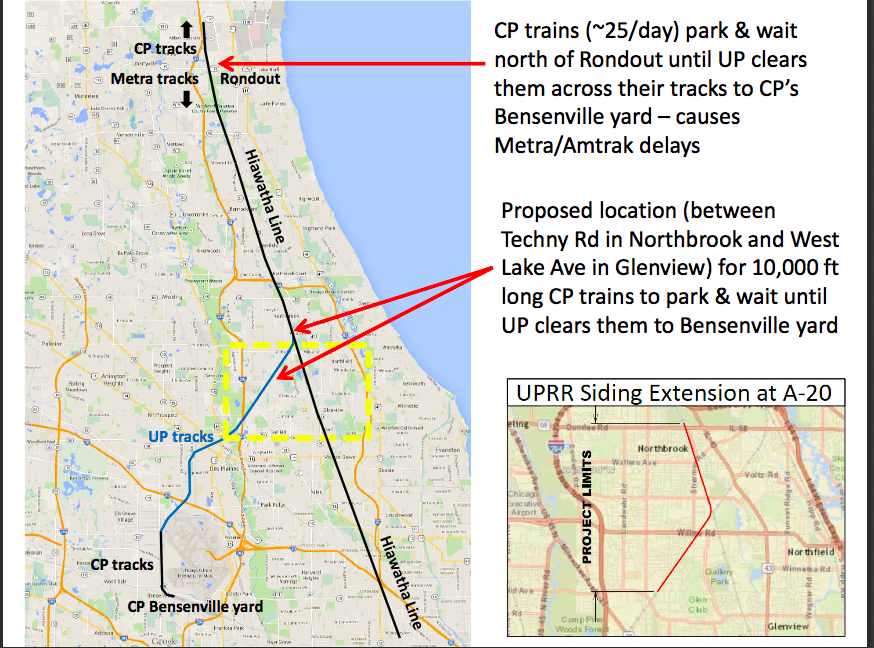 A map of proposed Hiawatha changes, provided by the Village of Glenview

Not everyone is all aboard with new proposals submitted for service improvements to Amtrak’s Hiawatha line in Glenview, including Village officials who discussed the topic at length during a board meeting on January 20.

The popular train line, which provides daily roundtrips from Chicago to Milwaukee and has a central stop at Glenview’s downtown station, is looking to increase rides from 7 to 10 trips per day, mostly during the afternoon and evening hours. The suggested improvements are meant to accommodate the increased trains and keep them on schedule. The plans call for a new holding track to be built in West Glenview to corral competing Canadian Pacific freight trains needing clearance to continue their route to a freight yard in Bensenville. The project reportedly would be funded 75% by the Wisconsin Department of Transportation (WisDOT) and 25% by the Illinois Department of Trasnportation (IDOT) and the Federal Railway Administration (FRA).

Concerns include the increased traffic backups to the already congested downtown area on Glenview Road, noise control for residents and, of greater importance, the implied need to construct a new bridge for the proposed holding track, which would again shut down Shermer Road. Shermer Road was closed for two years to rebuild the bridge overpass that was destroyed in a summer 2012 derailment.

“We’ve had no new developments [since the board meeting],” said the Village’s Director of Planning Jeff Brady. Brady and other officials are still waiting for a response from IDOT after submitting a list of grievances about the project, which currently is being evaulated by an independent consulting firm and going through an environmental assessment. Officials have criticized those reports for being vague in nature and are looking for more concrete information.

“At this point we are still in fact gathering mode. We have a limited amount of information not only from the specifics of what is being proposed, why this area was chosen and what process entails,” said Brady. “We want to know if this is a feasible opportunity, or what other ones might exist in other locations and what the pros and cons would be relative to the impact on Glenview residents in the current proposal.” 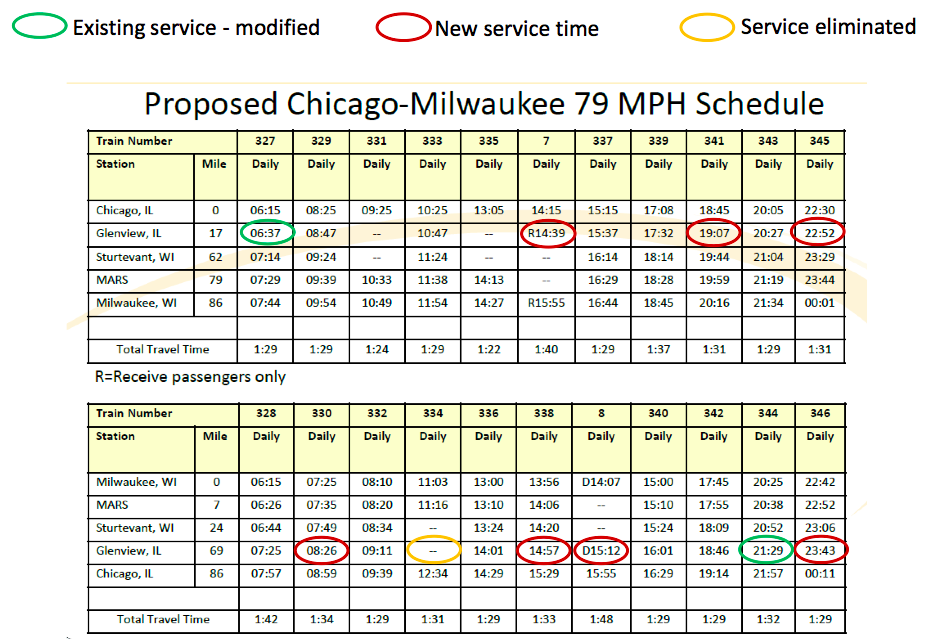 Proposed schedule changes for the Hiawatha line, provided by the Village of Glenview

Part of the discussion continues to ask the age-old question of whether moving the Amtrak stop to the North Glen station would alleviate part of the congestion problem. Here, intersecting roadways are further away from the station meaning crossing gates don’t have to paralyze traffic for as long; as well the more industrial area would be less affected by noise pollution and have less of a risk for the number of children who cross the downtown-area tracks from the nearby library and Our Lady of Perpetual Help school, even though Brady assures much has been done in recent years to make the gates a safe crossing.

“The Village sees the [downtown] Amtrak stop as an amenity and great service to the community, and we will probably even get some comments [from residents] about moving it because they commute to Milwaukee for their jobs so this current location is convenient for them,” Brady said, noting for now there are a lot of questions from all ends and not a lot of answers.

The Village is doing its part to help the public by putting together a dedicated webpage on the official Glenview website with contact info for project leaders, including info in the locally distributed newsletter and making staff available to explain the situation. Officials are also asking for one of two public involvement meetings to be held in Glenview for residents to voice their concerns, which tentatively looks like it could happen in June. If you’d like to also be e-mailed with updates as the village receives them, submit your request to [email protected].

-See Brady’s PowerPoint submitted in the January 20 board meeting

-Watch the board meeting video