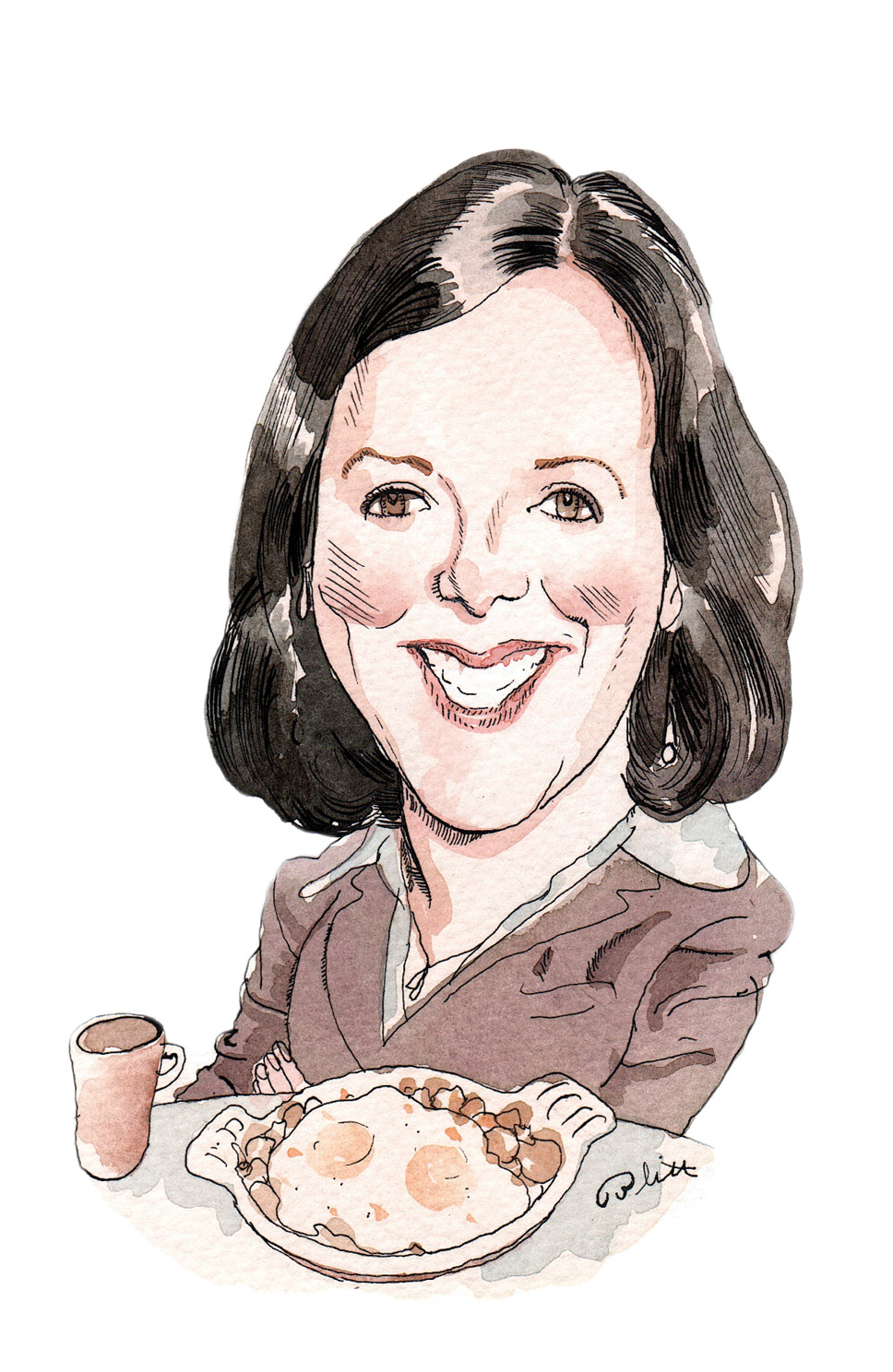 At the Egg Harbor Café in Glenview (and presumably at all their locations from Wisconsin to Georgia), the rustic portrayal of roosters and hens is ubiquitous: on the woodcarvings, plates, jars, napkins, salt-and-pepper shakers and beyond. (The ‘O’ in “Harbor” is also an egg; in case you somehow miss the dinosaur-sized chicken in the foyer and have the gall to ask what the theme is.)

It’s all enough, certainly, to cause the mind to wander. To entertain the notion that maybe, just maybe, the server will come out dressed — down to the pitch fork — like the man in the American Gothic painting. Or, conversely, to find that the server, head on a swivel and clucking mournfully, approaches each of her tables with a resounding — bkAW!

Instead, the server asks for our order. Gina Arquilla DeBoni opts to create her own skillet, adding mushrooms and spinach to melted jack and cheddar cheese on top of two eggs, over-medium. Piping-hot Intelligentsia coffee is poured.

“The cold is not my friend,” says Arquilla DeBoni, taking a sip. She has been going to this particular Egg Harbor Café since it first opened on Kingston and Willow many winters ago: long before they packed up all the barnyard tchotchkes and relocated next to the train station.

But that has since changed for Arquilla DeBoni, driver of her self-described “Mom-mobile” — a Buick Enclave — after the birth of her two children. Says she, “We don’t go out as much as we used to.”

Her duties don’t end there. As the managing attorney at Romanucci & Blandin LLC, the Chicago-based personal injury firm, Arquilla DeBoni is responsible for the overall management and quality assurance of the nationally recognized law office.

“Every new case that comes into the office crosses my desk,” says Arquilla DeBoni, most recently named one of the Top Women Lawyers in Illinois by Super Lawyers magazine. From there, she assigns each case out to a team that includes one of the partners, a senior associate, another associate, one to two paralegals, and a law clerk. But before any of that she checks to see if she can add value herself, sometimes resolving the case before it goes to court; a testament to her skills as a shrewd negotiator.

Though she doesn’t litigate as much as she used to, she still keeps a caseload. Certain clients like working directly with her. Often they’re women.

“They like being able to have a female attorney,” notes Arquilla DeBoni, who chairs U.S. Sen. Mark Kirk’s Women’s Advisory Board.

Growing up in Northbrook, it would seem Arquilla DeBoni was destined to have a career in the courtroom. (Her father, a first-generation Italian-American, always wanted her to go into law.) Her uncle and grandfather (“a true academic”) were both lawyers. Her friend’s fathers were judges. But aside from her grandfather’s stories, law didn’t factor prominently in her household. That immersion would come later, beginning with representing children in the courtrooms of Iowa.

Arquilla DeBoni always wanted to help others, so she thought, initially, it would be through social work. At the University of Iowa she studied sociology and volunteered for course credit at the Department for Children and Family Services.

“Through that experience, I often had to go to court,” she says. After doing foster care spot checks and visiting homes, Arquilla DeBoni would report on what she saw to the judge.

“That was part of the inspiration for me going to law school, because I enjoyed the courtroom aspect of it but still wanted to be able to help others,” she says.

Much of that experience stays with her, even to this day: A girl named Cassandra, seven years old, sent by her mother alone on a bus from Chicago to Iowa; a mother with learning disabilities who would forget to turn on her child’s heart monitor.

“I felt these children needed a voice to protect them,” says Arquilla DeBoni.

Which came first, the chicken or the egg? It’s a hard question to crack because it suffers from the causality dilemma (which came first, X that can’t come without Y, or Y that can’t come without X?). However, in jurisprudence and the courtroom, causation is everything and must be proven. Legal cause must be demonstrated to hold a defendant liable for a crime or a tort (wrongful act or an infringement of a right).

Some of the plaintiff cases Romanucci & Blandin are representing right now are against defendants like Maine West High School, the Chicago Police Department, and the Roman Catholic Diocese of Joliet. The charges include hazing, police misconduct, and sex abuse.

Apropos of the times, Arquilla DeBoni says over the past year the firm’s police misconduct cases have increased over 70 percent. But she has a hard time commenting on the cases that get national attention due, in part, to over-involvement by the media.

“The thing is, I don’t think all cops are bad. I think, by and large, the vast majority are great people — they’re out there helping and serving and protecting,” says Arquilla DeBoni. “There are a few bad apples, and those are the cases that we get involved in.”

And with the population getting older, she foresees nursing home malpractice and medical malpractice being on the rise, beginning as soon as 2016. Are her most challenging cases?

“From a legal perspective, [the challenging ones are] often when there’s the corporate shield: they have multiple entities to try to avoid liability, and you have to be creative with how you get to the entity that’s really responsible,” she explains.

Another complex case early in her career saw her covering for a partner. In a pre-trail conference in the judge’s chambers, she introduced herself to the lawyer representing the third-party defendant. His name? Frank DeBoni.

Months later, in the parking lot of the Rosewood, DeBoni, a 20-something attorney, proudly showed her his new Jaguar convertible. In turn, Arquilla responded, “Oh, is that a [Ford] Seabreeze? My friend has one!”

They’ve been together ever since.