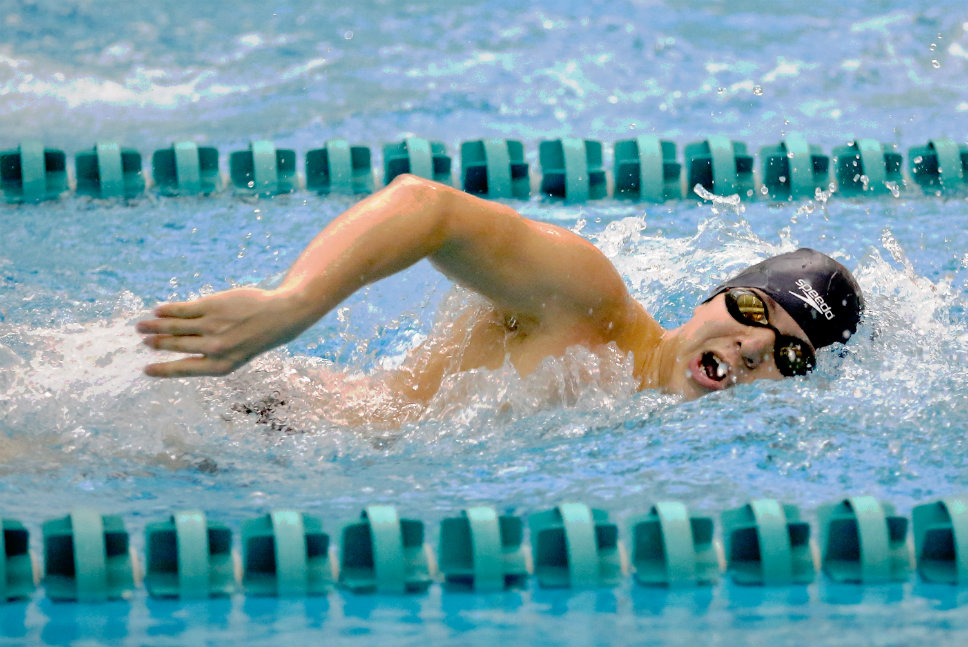 Highland Park’s Allen Tran competes in the 200 IM during a dual meet against Glenbrook North. Photography by Jon Durr

“It’s a thing I like to do,” Tran says of the self-inflicted thing of his pre-race routine. “When I was in the sixth grade, I saw [future Giants teammate Alex Grigorovich] pound his chest before a race at a meet. He was a real fast swimmer. I thought, ‘I’ll try doing that.’

It pumps him up, gets his adrenaline up to SST speed. There is more to swimming than strokes and kicks and turns.

“Allen get us all pumped up,” HP senior Sam Dotson says of the team’s top breaststroker and valuable relay member. “The desire he has and shows at meets and practices … it’s contagious. He loves the sport, he’s good at it, and he loves to win.”

A couple of years ago, as a freshman, Tran was unsure of his future as a swimmer. He did not think he was good enough, fast enough, big enough. At a sectional meet that winter, a senior on the team, Jeremy Solomon, talked to Tran. The talk turned Tran’s hesitancy into decisiveness.

“I was an OK swimmer, just a little swimmer,” Tran recalls. “It was a time in my life when I was seriously thinking, ‘Should I continue swimming or try something else?’ Jeremy, he was breaststroker. He told me, ‘I see so much potential in you.’ He believed in me, saw something in me.”

Tran stuck with swimming. Tran threw himself into training, as a member of the Highland Park Aquatics Club. Nearly a year to the date of Solomon’s sincere, inspiring talk, Tran raced in the 100-yard breaststroke event at a sectional.

Tran clocked a 1:00.59, swift enough for a state-qualifying berth. He expressed sheer elation on a start block/award podium, before receiving his medal. Solomon was right. A week later Tran would finish 41st at the state meet.

The state-qualifying standard in the 100 breast this winter is down to 1:00.5. Tran swam a personal-best 59.8 in the event his winter. His 1:00.68 in a dual at Glenbrook North last weekend was nearly six seconds faster than the runner-up’s time. A six-second differential in swimming is the equivalent of a 42-7 final in football and a 6-1, 6-1 decision in tennis.

“[Tran] has always been very talented,” HP coach Tim Sirois says, adding Tran has a good shot at qualifying for state in the 200 IM next month. “His stroke has improved. He’s stronger. He’s made big changes in his breaststroke, in his freestyle. The front part of his strokes are way better and stronger than they were last year.”

Tran’s gregariousness at meets? Never better. Sirois dubbed Tran “The Mayor of the Central Suburban League.” Tran knows practically everybody on deck at small meets, at big meets, at prep meets, at club meets. Tran also knows practically everybody’s season-best times and state ranks, especially the breaststrokers’. The adjective Dotson uses to describe Tran’s knowledge around swimmers at natatoriums is “encyclopedic.” Watch Tran navigate a pool deck at a meet, when he’s not oblivious to his surroundings while he prepares for a race. He chats up swimmers from other schools, nods hellos at swimmers from other schools, smiles here, smiles there.

“It’s a small community, the swimming community,” says Tran, whose brother, 13-year-old Ryan, and sister, 14-year-old Sydney, are accomplished age-group swimmers. “The people I see at meets, I see them at all meets. I love this sport; it’s a passion of mine. I also love connecting with people in this sport. I’m friendly.

“One day my mom [Uyen] told me to get off the computer at home, to move around. I said, ‘Mom, I can’t do that right now. I’m busy connecting with somebody from California.’ ”

At an invite at Elk Grove High School earlier this month, Uyen Tran focused on taking a picture of the three heat winners in the 100 breaststroke. Giants swept the event. Allen Tran, winner of the fastest heat, was in the picture, no surprise.

“Allen got everybody excited when he said, before the event, ‘We can win all three of these heats,’ ” Dotson recalls. “He hugs me after I swim a good race. He also gives me a hard time at times. If I swim a best time, he likes to say, ‘Come on, you could’ve gone faster than that.’ He’s a confident swimmer. He has confidence in his teammates. His personality … it’s strong, very strong.

“What you’re going to get from Allen is encouragement, no matter what,” he adds.