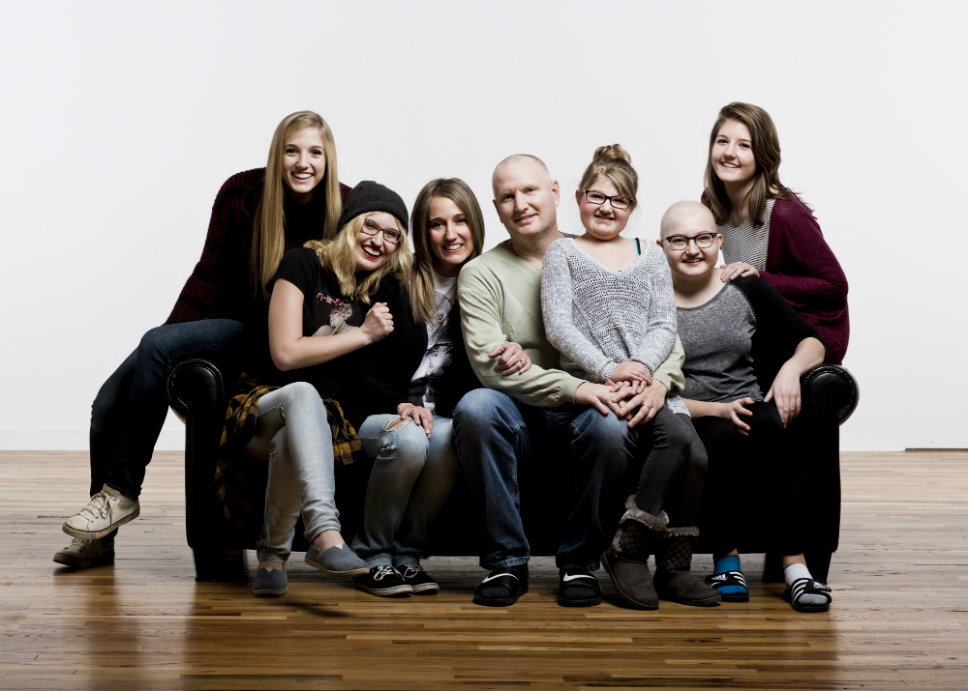 The 14-year-old heard every singsongy syllable, thanks to a live internet feed of the game on Dec. 10. Amy Johnson was in Cincinnati, too, sitting next to her daughter and hearing the same pulsating, encouraging sounds. Both saw a sea of cheering students and adults wearing lime-green T-shirts at the game. On the front of each shirt, in blue letters: “HOPE FOR LEXIE”.

Lexie Johnson is one of five daughters of Steve and Amy Johnson. They live in Wauconda. Steve is the special education department chairman and a freshman basketball and golf coach at LFHS. Lexie and Amy have to call Cincinnati their second home until August because Lexie is receiving treatment for precursor B-cell lymphoblastic lymphoma (a rare form of leukemia) at Cincinnati Children’s Hospital.

It is a familiar hospital to the Johnsons. Too familiar. Mackenzie Johnson, Lexie’s 12-year-old sister, was diagnosed with the same rare form of leukemia shortly after her first birthday. She spent six months at the hospital. One of their older sisters, twin Lindsay, was born with a highly complex congenital heart defect. Doctors said she might live until the age of three. She is 19 years old today, a survivor of more than 10 surgeries and a sophomore at Grand Canyon University in Phoenix. She received a pacemaker last month. One of her classmates at GCU is her twin sister, Taylor.

Heart defect, leukemia, leukemia. Three strikes, but they are not out. The three Johnson sisters are still at the plate, still battling, still hopeful. The most resilient family in Lake County has to be the Johnson family. The Johnson family is redefining resiliency. Daily.

“There’s a reason we’re going through what we’re going through,” says Steve, whose other daughter, Kali, is a senior at Wauconda High School and plans to enroll at Grand Canyon University in the fall. “We’re not sure what that reason is, but we’ll find out. Our faith is strong.”

The Lake Forest community raised $10,000 for the Johnson family at that basketball fundraiser at LFHS last month. The school’s booster club, athletic department, basketball programs, faculty and student body, along with residents and hoops fans, contributed to the total. Referees happily left the gym with lighter wallets. Other schools offered to buy what was left of the lime-green Lexie T-shirt supply of 600. What was left, after the final buzzer of the basketball game: zero T-Shirts.

Lake Forest High School’s gymnastics team held a fundraiser for the Johnsons at its Straus Invitational on Jan. 10.

“No one deserves what Steve’s family is experiencing,” says Joe Busse, a faculty member in the the Wellness Department and a football coach at LFHS. “Steve is a special guy, a great family man. Looking at the way he is handling these challenges, the way he is going about his life, the way he is during school hours, you’d never know his situation at home. How he’s facing what he has to face is a tremendous lesson for all of us.

“Whatever we can do as a community, with money, with support, with anything … we’ll do it if it helps Steve and his family sleep better each night.”

One of the Johnsons’ neighbors in Wauconda, Jen Slago, set up a donation site for the Johnson family at gofundme.com late last year. It took only two months for more than 400 people to donate a combined $63,000. The funds helped the Johnsons pay for medical bills that reached astronomical status years ago. The funds helped the Johnsons keep their home in Wauconda. Steve and Amy, on advice from administrators at Children’s Hospital in Cincinnati, established residency in Ohio in order to qualify for Medicaid.

People from Illinois and Ohio are in the Johnson family’s corner. They plan to stick around for more rounds, for however long it takes to help a Johnson daughter knock out another session of chemotherapy or absorb another heart surgery.

“I am so proud of how our community has rallied behind Coach Johnson and his family,” says Anne Skinner, mother of two teens who attend LFHS. “Everyone at Lake Forest High School knows Steve Johnson. He is one of the nicest, most humble people you will ever meet. We are moved by his family’s story and our community’s reaction.”

Barbara Jane England moved to Lake Forest from Mariemont, Ohio, nearly four years ago. Mariemont is located near Cincinnati. She remembered meeting members of a Johnson family from Illinois when Mackenzie was a patient for six months at Children’s Hospital in Cincinnati. England called various schools in and near Lake Forest years later, gathering information about academic programs ahead of her family’s move to the North Shore. A Steve Johnson from LFHS — the Steve Johnson she had encountered in the Buckeye State, the Steve Johnson with a daughter named Mackenzie — returned England’s phone call. They reconnected.

“It’s incredibly heart-wrenching, what the Johnsons are going through,” England says. “They’re brave. They’re strong, incredibly strong. They’re brave and strong while Steve stays here and Amy and Lexie live in Ohio for a while. I love seeing our community, especially the kids, show support, show empathy. The kids are looking at what the Johnson daughters are enduring and thinking, ‘Hey, that could be me.’ It’s a real-life issue. They’re realizing what’s important, what’s not important.”

Steve Johnson struggles to find the right words to express his feelings for the outpouring of support his family has received. He knows “Thank you” is too generic, too incomplete. Lexie, back in Illinois for a brief visit, received too many hugs to count from gymnasts at that LFHS gymnastics invitational/fundraiser earlier this month.

“I saw that,” Steve says. “Amazing, awesome. It was another neat display of the community doing something special for Lexie, for all of us. They didn’t even know Lexie.”

They know Steve Johnson. They know the Johnson Family Story. That was plenty.

At last month’s basketball fundraiser at LFHS, basketball players signed their names on a basketball for Lexie. Some added heartfelt messages. A Lake Forest resident, who had grown up in the Cincinnati area and would soon drive there for a visit, offered to transport the ball to Lexie. The offer was accepted.

The basketball traveled some 325 miles for what had to be the lengthiest pass in hoops history.

“It’s been tough for Lexie in Ohio, being away from her friends and doing all she can to keep up with her schoolwork,” Steve says. “Her treatment … it’s going well. She’s doing well. She’s responding. Her spirits are good.

“As a family,” he adds, “we keep going on, keep waking up the next day. It wouldn’t do any good for any of us to wallow and cry in a fetal position. You have to persevere. We’re persevering.”