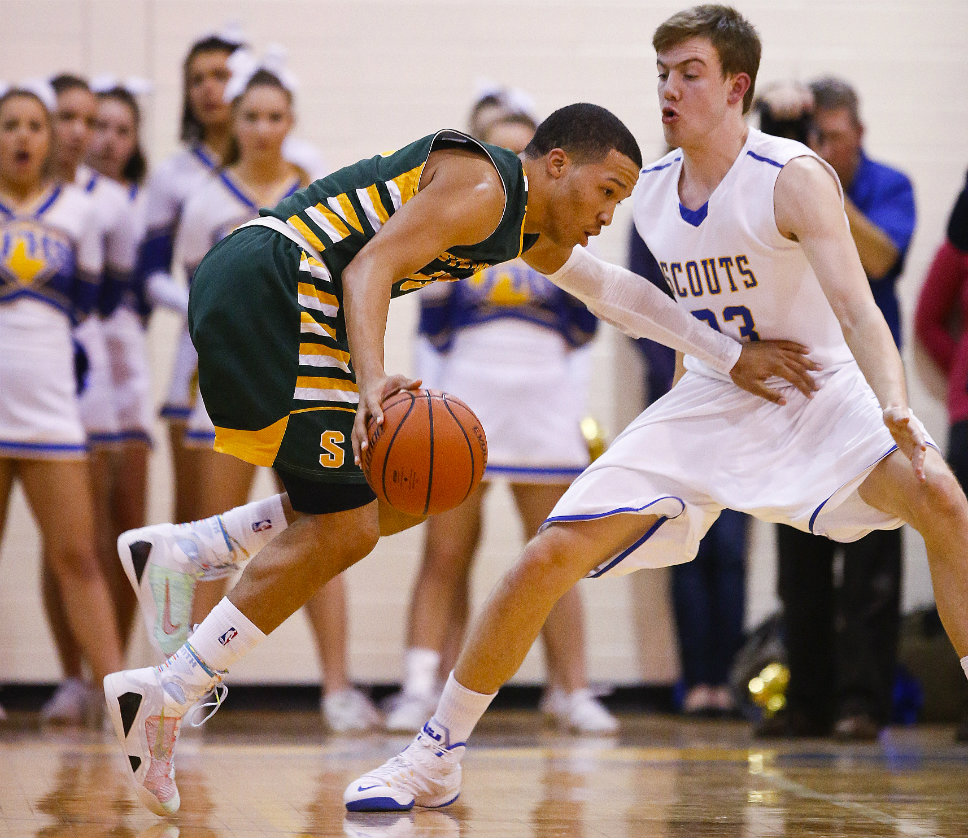 He admitted his mind was not entirely focused on academics for either test. The 6-foot-7 guard-forward admitted thoughts about Stevenson’s boys basketball team popped up here and there during the school day.

Could you blame him?

A Vogrich three-pointer, made at the 3:34 mark of the fourth quarter, shook the structure, catapulted home fans out of their seats. The trey gave the Scouts a 60-59 lead.

“Great atmosphere,” Vogrich would say later, after scoring 10 points (all of them coming in the second half) in a highly entertaining and competitive 76-69 loss. “It was so much fun playing in an atmosphere like that. Our student fans did a great job. They were loud. They were supportive.

“We fought. I will remember how well we fought, how we played less frantically in the second half than we did in the first half (12 turnovers). We showed we have as much talent as Stevenson has.”

The Stevenson game was Vogrich’s fourth since he got cleared to return from a bout with mononucleosis. The illness had sidelined him for seven games. The time away must have felt like 77 games to Vogrich, maybe more.

“He’s back, and we’re glad to have him back,” said Scouts senior guard Noah Karras (nine points, all from three-point real estate). “Steve is long, tall, a tremendous player. We were both role players last year. Steve is much more than that now. This year he’s more aggressive, more confident. He’s utilizing more of his skills and creating more shots for himself.”

Vogrich was on the front and back ends of the most electrifying sequence for the home team on Jan. 15. He and Scouts junior forward Lorenzo Edwards (10 points, seven rebounds) double-teamed Stevenson’s impossibly talented guard, senior Jalen Brunson (41 points), near midcourt in the fourth quarter, forcing a turnover. Vogrich scurried downcourt, received a pass from Edwards, dribbled a few times and threw down a contested dunk. Delirium ensued.

“Crazy and insane, a great experience,” Karras said of the game’s tip-to-final-buzzer intensity. “When Steve hit that huge three-pointer [to give LF a 60-59 advantage], I thought we had it. A lot of us thought that.”

Villanova-bound Brunson poured in 12 of his team’s final 17 points to clinch the win, nearly a year after charring nets on the same court for 57 points in a 95-93 double-overtime Patriots victory. Lake Forest’s Evan Boudreaux hit for 43 points in the same game.

The Scouts’ 6-8 senior forward/center struck for 29 points and came down with 15 rebounds in the Stevenson-Lake Forest clash last week. The Dartmouth recruit netted 12 points in the third quarter.

Vogrich had opened the third frame with a three-pointer, his first points of the night. He and starting guard Jack Traynor (seven points, five assists) took turns guarding Brunson in the second half, an AP-physics-tough task for any hoopster, particularly for one whose case of mono hasn’t completely disappeared from his rear-view mirror.

“Steve has been steady,” Scouts coach Phil LaScala said. “He’s been doing a great job for us. He did a great job for us [against Stevenson], in a big game, not long after returning from his illness. He’s not shy; he’s an aggressive player. He makes plays.”

He plays defense, a critical aspect of his game these days. Vogrich shoots for A marks on D. Vogrich’s father, Bob, knows basketball axioms. One of his favorites is about defense and playing time. One of his favorite players has heard it, has internalized it, has embraced it.

“My dad has told me, ‘You won’t be taken off the court if you play good defense,’ ” Steve said.

Defense helped LaScala’s club startle and frustrate Stevenson for stretches in the second half on Jan. 15. The Patriots owned their biggest lead, 52-38, at 2:12 of the third quarter. Offensive spurts helped LF, too. Only 31 seconds separated treys from Karras and Boudreaux at the end of the third quarter.

“Great environment for the kids,” LaScala said. “They’ll remember this for the rest of their lives.”

The memorable game left Stevenson with a 6-0 Lake Division mark in the North Suburban Conference. Lake Forest walked off its home court with a 5-1 division record.

Stevenson hosts Lake Forest in the rematch on Feb. 20.

Notable: It was estimated that nearly 200 fans were informed they could not enter the gym for the sold-out varsity boys basketball game between Stevenson and Lake Forest on Jan. 15. Nearly every seat had been occupied by the start of the fourth quarter of the undercard, the Stevenson-LF sophomore boys basketball game. “They [LF’s sophs] were amped up tonight, definitely amped up,” Karras said. … Burkhalter praised his busy, tireless staff after the varsity game. “I have an unbelievable staff,” the LFHS AD said. “So many people did so many things to pull this off for us. What we saw tonight is what high school athletics is all about, is what high school athletics should be all about it. It was a ton of fun for our kids.” … Karras, on Vogrich’s mono: “He was bummed out. We couldn’t believe it. It was tough on us. Steve, though, did not let mono get the best of him. When he couldn’t play in games, he was always pumped up on the bench.”