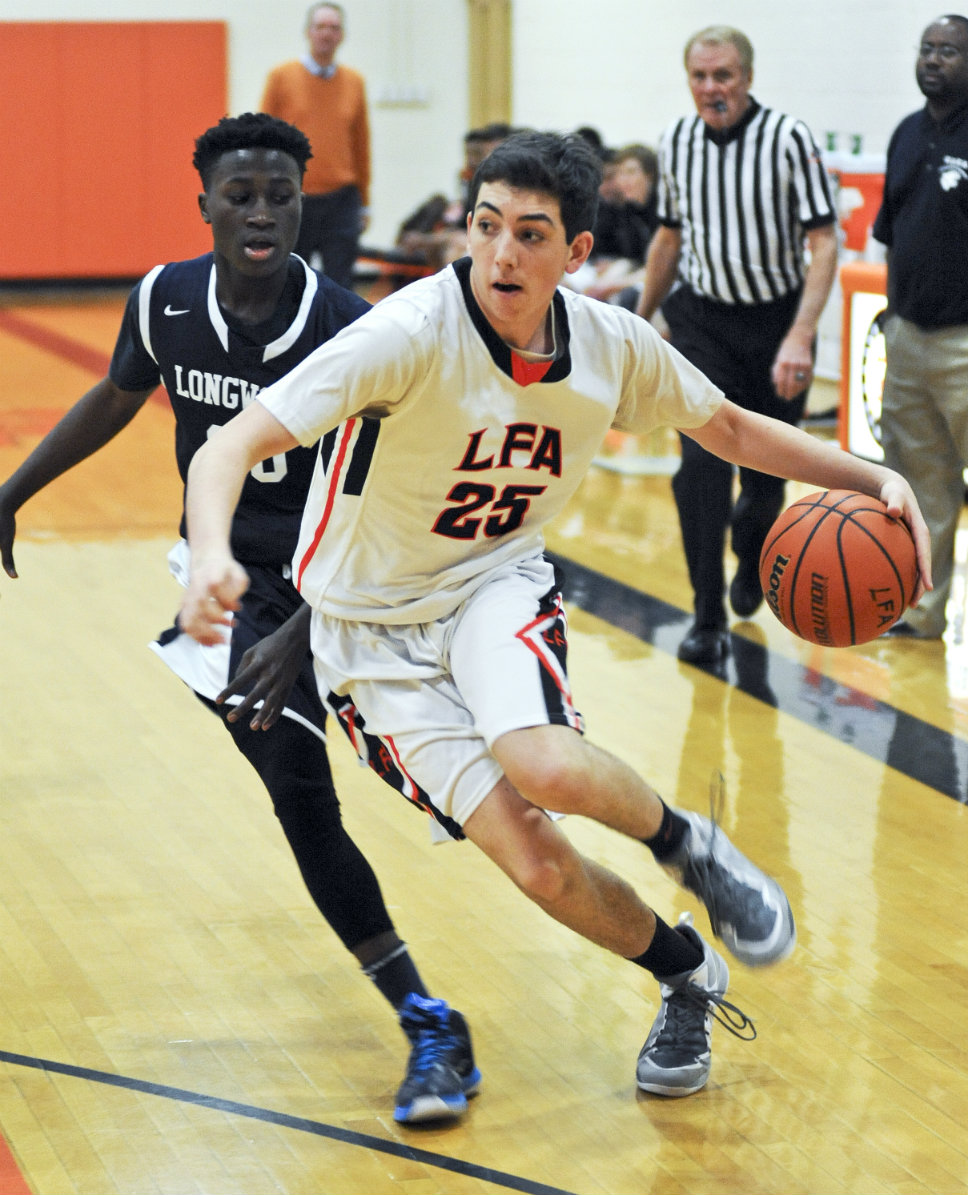 Lake Forest Academy’s Ryan Clamage drives to the bucket during earlier action this season. The senior has verbally committed to Rochester University. Photography by George Pfoertner

Lake Forest Academy (LFA) senior shooting guard Ryan Clamage follows them all closely, knows their strengths and tendencies, yearns to learn from them every chance he gets.

But none has had as much of a basketball influence on him as a sophomore guard at quaint, cozy Macalester College in Minnesota continues to have.

“She’s the shooter in the family,” the 6-foot-3, 170-pound Ryan says of the all-time leading girls basketball scorer in LFA history. “She taught me how to shoot. And the way she works on her game, it’s amazing. Last summer she’d get up every day, sometimes as early as 6 a.m., to run and shoot.”

Ryan ran and shot, efficiently and effectively, on Dec. 3, in a home game against Longwood Charter School. The Lake Forest resident poured in 10 of his 14 points and collected all three of his steals in the first quarter of an 82-40 victory. The long-armed Caxy scored in a variety of ways in the first eight minutes, draining two smooth-looking three-pointers, popping down low for a put-back bucket and netting a feathery jumper.

“Ryan can score from anywhere on the court,” LFA senior guard Dejon Brissett says. “He knows how to find his shot and create shots for everybody else. His knowledge of the game, his attitude … they’re the best. Energy, energy, energy — that’s his word.”

A captain and fourth-year varsity member, Ryan (through LFA’s first seven games) was averaging nearly 12 points and four assists per game for an up-tempo, dunk-happy and highly entertaining squad. He amassed a career-high 25 points in a game against Hope Academy last winter and dropped 20 points on Uplift High School’s club on Nov. 28.

“His game has really improved, and he’s become more of a leader this season,” LFA boys basketball coach Matt Vaughn says. “He has taken ownership of the team.

“Ryan’s whole family loves basketball,” the coach adds, alluding to Ryan’s parents, Ed and Audrey, and Ryan’s other siblings, Eric (a senior at Furman University in South Carolina) and Austin (a sophomore at LFA). “Ryan could talk basketball with you all night.”

As well as watch it — or play it — from the time he gets up in the morning until the moment his head hits the pillow at night.

“I’ve loved the sport since I shot a small, squishy basketball at a small basket in my basement when I was little,” Ryan recalls. “I remember thinking, ‘This is it; this is the sport for me.’ I’ve always been interested in learning all there is to learn about the game. I watch how Mike Dunleavy comes off screens, how Steph Curry shoots. You could say I’m a student of the game.”

Another one of Ryan’s young mentors has been Dylan Ennis, a former LFA star hoopster and current guard at Villanova. As a senior he struck for an astounding 41 of LFA’s 51 points in a game against Culver (Ind.) Academy.

“Dylan is another player who likes to get up early and work constantly on his game; he did that here at Lake Forest Academy,” says Ryan, who verbally committed to University of Rochester (N.Y.) earlier this month. “He was such a great player for our program, with an outstanding work ethic. I try to watch him play [on TV] as often as I can, and I also like Tyus Jones’ game at Duke.”

There are times when Ryan doesn’t need a basketball and a fundamentally sound jump shot to make an impact. He also has a delightful knack for drawing attention in classrooms.

“Ryan is a smart, funny guy who makes the atmosphere in a class a happier one because of his personality,” says Spencer Chen, an LFA senior from Taiwan. “He’s a front-row kid, a hard worker and a fun person to be around. Everybody loves him.”