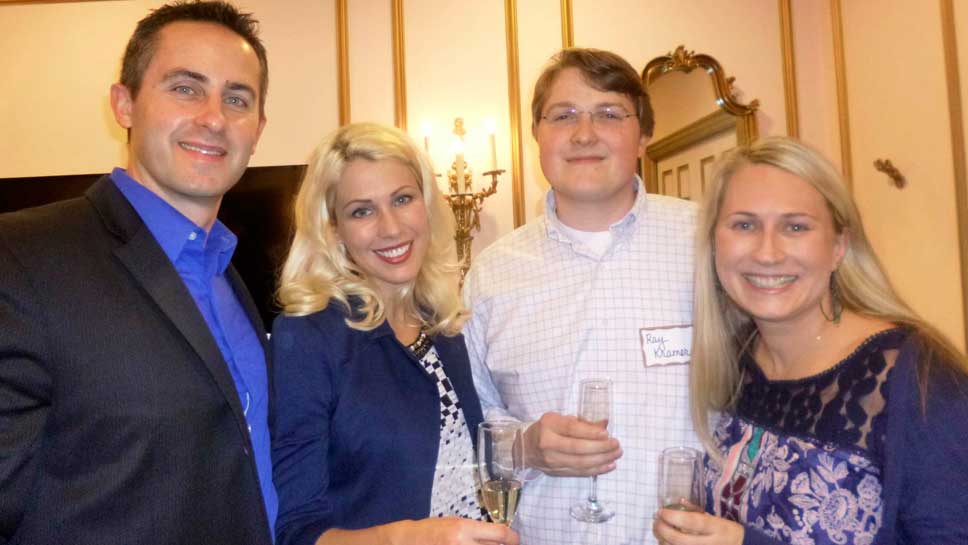 From left: French School parents Arthur and Stephanie Tokarczyk of Winnetka and Ray Kramer and Dominika Smereczynski of Glencoe sip champagne while waiting for la galette to be sliced.

The French Institute of the North Shore and French School hosted a special event on Monday, January 12th to celebrate a French custom called la Fête des rois, which traditionally takes place on the first Sunday in January to mark the arrival of the three kings (rois) in Bethlehem, but is now celebrated all month long in France. As part of this tradition, families and friends gather together to eat an almond-filled cake called a galette. A small token called a fève is hidden inside each cake, and the one who finds this token is crowned the king or queen for the evening.

Before slicing la galette, French Institute and French school executive director Maria Kurt asked for a moment of silence to remember the victims of the terrorist attacks in Paris. “We stand united with France and the larger francophone community during this time of mourning,” said Kurt. “Our thoughts are with the victims, their families and all of France.”

After this somber moment of reflection, the soirée continued and was a great success as guests mingled, speaking alternately in French and English, while sipping champagne and tasting a variety of French cheeses. Of course the highlight of the night was when the galettes were cut and shared amongst excited guests who savored their pieces while looking for the hidden fève.

French Institute student Luz Escalante was the first to find the coveted charm in her slice, followed by French School parent Eric Blomme. Both were crowned royalty for the evening. Then, in accordance with the custom, they each chose their respective king and queen who were also crowned.

Thoughts of the victims remained in everyone’s mind as the event came to an end and guests began filing out into the chilly winter air. French Institute and French School will continue to hold Paris in their hearts in the weeks to come.