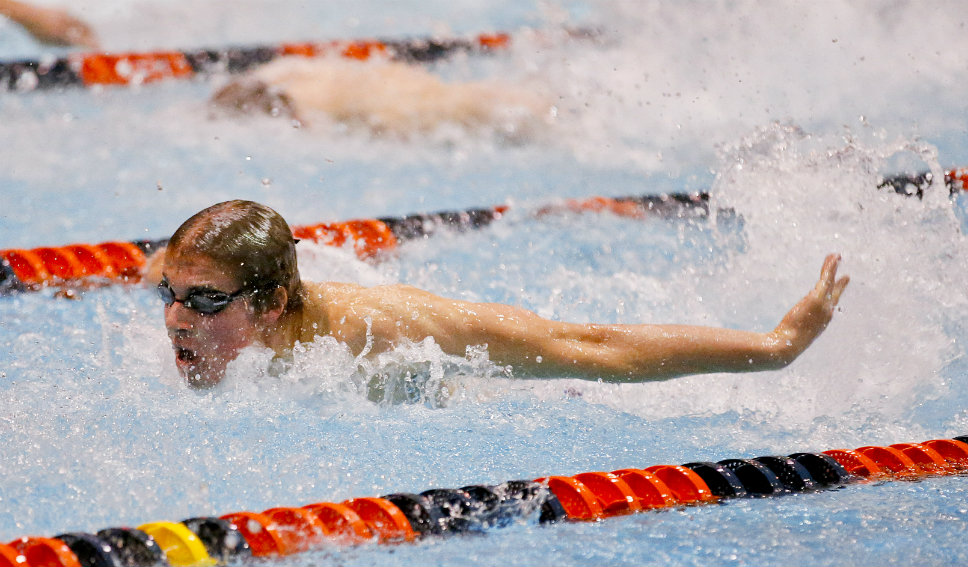 Swimmer Murphy McQuet had been warned. His high school years at New Trier would zip by, four years feeling like two. Stop and smell the chlorinated water, the one delivering the warning essentially suggested.

“That’s been his main message to me for years,” McQuet says. “It’s my senior year already. Weird. My dad was right. Time does pass quickly. I’m going to enjoy this season, enjoy the competition at every meet.”

It is McQuet’s turn now. It is McQuet’s time. Time to shine, time to lead, time to pare serious time in his events. The captain and Princeton-bound swimmer added 15-20 pounds of muscle to the 6-foot-2 frame he steered to finish third in the 200-yard freestyle (1:40.54) and eighth in the 100 butterfly (50.76) at the state meet last winter. He also swam a leg on the Trevians’ sixth-place 400 free relay.

“Our most talented swimmer, no question,” says NT’s first-year coach, Josh Runkle, formerly the helmsman of boys crews at Glenbrook North and Highland Park. “Murphy is our homerun hitter. But the biggest thing is his leadership. He’s a leader who works his tail off.

“I tell his teammates, ‘Look, if Murphy is doing something in practice, it’s probably something you should be doing, too.’ He’s special, a talent … conscientious and aware of things. There’s a lot to like.”

McQuet generated the most points for his team at the Evanston Invitational on Jan. 10. He topped the 100 free (47.09) and 200 free (1:42.06) fields and swam the third leg of the victorious 200 medley relay (1:38.02, with classmates Drew Keenan, Alex Grant and Tomo Sharpee). He also contributed third-place points in the 400 free relay, joining senior Willie Kinsella and juniors Danny Brooks and Maxwell Robertson for a time of 3:15.68.

It’s a good thing NT’s quartet took third instead of fourth in the final race of the 18-team meet. NT edged Glenbrook South 2,836-2,833 for the team championship.

It’s also a good thing McQuet is a member of New Trier’s Class of 2015.

“It’s been fun. It’s been nice being a senior and mentoring the younger swimmers,” says McQuet, 17th at state in the 100 free (46.96) in his sophomore year. “We have a new coach, a new system. We’re getting in a groove as a team. Right now, for me, it’s all about school and swimming. I consider my teammates to be 20 of my best friends.”

Computer science interests him. It might end up being his major at the Ivy League school in New Jersey. He labels the area of study “kind of a fun topic.” Swimming is grueling and taxing and exhausting. It is also exactly what a math guy wants in a sport.

“I like that it’s quantitative, objective,” McQuet says. “You see yourself getting better [based on a clock, never qualitative, never subjective]. There’s no gray area in swimming. What I also like about it is its culture. Great culture. It’s for grinders, guys who put the time in, guys who like to put the time in to get better and faster. It fits me.”

Earlier this season, Runkle deployed McQuet as the anchor leg of a Trevians “B” relay at a crossover Central Suburban League dual meet. Runkle knew McQuet would likely find himself in the position to chase another quartet’s anchor. Coach was right. McQuet entered the pool. He was behind, way behind, 15 yards behind. Insurmountable, right? It certainly looked that way, initially. Imagine a star varsity basketball player, averaging 30 points per game, ripping his warm-ups off and entering a game for the first time with his team down 30 points in the fourth quarter.

McQuet ended up catching and passing his target.

Dad must have been proud. McQuet is proud of his dad, no doubt. Rick McNair played for the U.S. men’s water polo team at the 1996 Olympic Games in Atlanta. McNair was 27 years old and a 6-5, 190-pound two-meter defender then, a native of Port Richmond, Calif., and a graduate of Stanford University.

“Knowing him, he was probably a pretty scrappy player,” McQuet says.

He probably also savored every day of the experience in Atlanta, every moment.