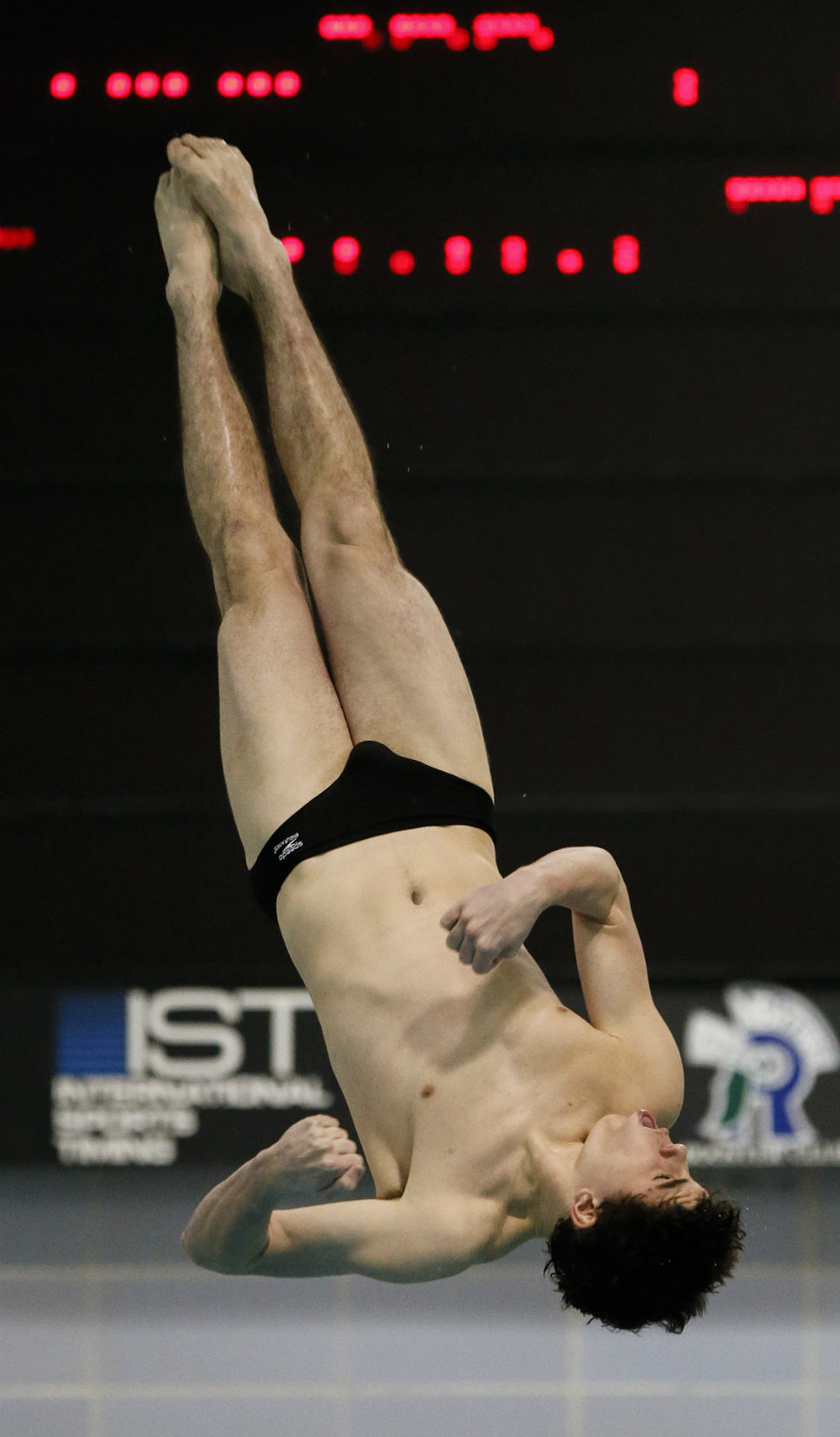 Maybe it has happened. Maybe it has not. Chris Canning stands on a diving board, slips, falls, hits water.

Loyola Academy diving coach Tony D’Amico has a pretty good idea what he’d see if Canning, a sophomore at LA, ever has to deal with such a mishap either at a practice or at a meet.

“His technique,” he adds, “is that good. The technique Chris has for his age is pretty amazing. It’s outstanding.”

Canning, a Wilmette resident, did not fall once at the New Trier Invitational on Jan. 10. He did, though, descend intentionally and gracefully 11 times, totaling a runner-up and personal-best score of 494.15 points in a sturdy field of 45. Lake Forest High School junior Alex Streightiff (505.55) took home the gold medal.

“I’m not the most powerful diver. I don’t jump the highest,” admits the 5-foot-10, 148-pound Canning, fourth at state last winter as a freshman plunger. “I try to make dives look good.”

Canning got off to quite an impressive start this winter. He set the school mark and LA pool mark for six dives (318 points). Canning also now owns the six-dive pool record at Evanston Township High School. Sound technique isn’t his only weapon.

“That’s a huge part of diving, confidence,” Canning says. “Like technique is. But you don’t ever want to be overly confident. Not in diving. There are too many others who are better. I do like competing. I like the thrill of training, of trying a new dive.”

“He’s very straight-forward,” Canning says. “I like that. I react well to that. He inspires me. He also makes diving so much fun. His coaching is similar to [D’Amico’s style], which helps. They both stress the importance of technique.”

D’Amico compares the rhythm of a successful diver’s hurdle and approach to that of a smooth golfer’s swing. Timing trumps brawn. Technique squishes brawn.

“Big body builders don’t hit long drives off tees,” D’Amico says. “Rhythm is more important than power in diving and golf, much more important. A diver like Chris, he has good rhythm on the board, a good feel. He also has plenty of kinesthetic awareness. He knows where everything has to be when he’s in the air.”

On the ground, Canning occasionally sheds seriousness, allowing a lighter side to emerge and entertain. D’Amico has seen it, heard it. D’Amico likes that side, too.

“He can be kind of a clown. There’s plenty of goofing around with Chris,” the coach says. “But that’s OK with me. I enjoy seeing that. Having a light side helps in this sport. One of our other divers [senior Ryan Nash] has a different kind of humor, a dry sense of humor.”

Technique, confidence, humor. All are critical for an elite diver, in practices and in meets. Canning knows that. The first two qualities produce results. The third trait takes the edge off of an athlete in a potentially dangerous sport that requires inordinate amounts of concentration and focus.

“You need to have fun in practice,” Canning insists. “Even at meets, it’s good to talk to other divers, get your mind off some things in between dives. If you’re too serious, too worked up, then you’re likely to mess up.”

Canning grew up in a hurry in the world of competitive diving. He had no choice. Diving is still his thing now and will continue to be for two-plus more seasons at Loyola Academy and for maybe four more years in college. Big meets against big-time divers don’t faze him. It’s just Canning and a board at meets. The air above it is his canvas, his body a paintbrush.

Art moves. Art elevates and twists and flips and somersaults and pierces water.